I get a lot of passionate e-mails from readers, especially sports fans and political partisans, who have strong feelings about whether a column is fair or a story is accurate.

This week, the story that garnered that heat was about the Toronto Blue Jays' wild card victory on Tuesday night. Not about whether a beer can was thrown near Baltimore outfielder Hyun Soo Kim – there is video evidence for all to see – but about the report that racial slurs had been hurled toward Mr. Kim and another Baltimore outfielder, Adam Jones.

Regarding the Globe and Mail story, one reader said it was a "terrible headline and inaccurate reporting. O's outfielder never said Toronto fans yelled racial slurs. … It was a general response. He did not say yeah, the fans were yelling racial slurs at me tonight. Did the author witness this?"

Another reader called for a correction, saying: "As a fan who was sitting in Section 136 directly above where Kim was stationed for most of the game I can confirm that no racial slurs were used whatsoever. … I appreciate that you're trying to be edgy and tackle the tough issues but this is factually incorrect and a misinterpretation of the quote."

But what these fans overlook is that the report was attributed to USA Today baseball writer Bob Nightengale, who tweeted, "There were also racial slurs hurled towards Kim and Jones, Adam Jones said."

Mr. Nightengale had written an article a few weeks ago on baseball and race that quoted Mr. Jones, so clearly the two know each other well.

And there is plenty of other evidence that racial slurs happen generally in baseball and specifically at Tuesday's Jays game. Not only were there tweets from fans at the game, but noted baseball writer Stacey May Fowles, who was there on the night, wrote this in The Globe:

"They are the guys to my left in the 200-level who spent much of Tuesday evening spouting obscenities, homophobic slurs, and making 'fat chick' jokes. They are the guys to my right who were happy to yell racist garbage at opposing players, and who repeatedly touched our section's usher without her consent. And they are whoever thought it was a good idea to disrupt a crucial seventh-inning play, during the most important game of the season so far, by tossing a beer can at Orioles outfielder Hyun Soo Kim."

Other media outlets, such as the Toronto Star and Global News, reported the same thing.

So, a little journalism background: I don't know Mr. Nightengale, but he has a reputation as a respected baseball expert. Like other beat reporters, he probably spends a lot of time with his sources – players, coaches, etc.

Also, since he wrote an earlier piece quoting Mr. Jones, I suspect the Orioles player trusts him with more information than he would share with other journalists in an open scrum. This often happens with good beat reporters. Their sources trust them and tell them more than they would say in public.

But in front of the cameras, Mr. Jones did not deny what happened and, in fact, said, "We hear everything." You can listen to him speak yourself.

Asked first about reports of slurs, Mr. Jones said it happens all the time. Asked again, "Did you hear that that [racial slurs] happened tonight?" He said, "Ah, you hear everything. We hear everything."

All the evidence above backs up what both the article and the headline say. 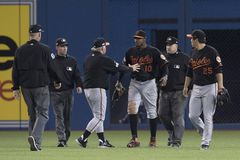 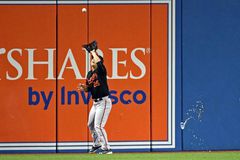