The All Electric
Audi e-tron Sportback

A glimpse at the next step in the electrification of Audi

Anyone in search of clues that the future of mobility is looking bright need look no further than the Audi e-tron Sportback. A thrilling, fully-electric SUV-coupe that made its Canadian debut at the 2020 Canadian International Auto Show, this vision of the future is now available in show-rooms across the nation. Combining instant electric power with Audi’s signature avant-garde aesthetic and sporty performance, it’s the first of its kind, a leader, not a follower, with style and sustainability in equal measure.

“Electric vehicles should not be treated as simply vehicles to get from point A to point B,” says Gene Fong, director of marketing at Audi Canada. “The sporty and exciting design of the e-tron Sportback reminds us that electric can be thrilling.”

What makes the e-tron Sportback groundbreaking is that, historically speaking, the traits it combines have often been at odds with each other. Drivers would have had to compromise. You could have a powerful engine or environmentally friendliness, all-terrain ability or fun-to-drive handling prowess, family-friendly spaciousness or a sleek design. Thanks to the new op-portunities afforded by Audi’s fully-electric drivetrain, however, drivers can now have all of the above. The e-tron Sportback represents the perfect combination of stylish everyday usability and thrilling performance. Underneath its crisp exterior, the Sportback delivers up to 402 horsepower and 490 lb-ft of torque from two electric motors. The large battery pack is mounted low in the chassis, ensur-ing an exceptionally low centre of gravity for spectacular handling and razor-sharp cornering.

While scintillating performance isn’t unusual for a new Audi, that’s not the Sportback’s only standout feature. The first thing you’ll notice about driving an e-tron Sportback, Fong explains, is the total lack of noise. “Being in the e-tron Sportback is like being in a personal cocoon, total-ly immersed in your own spa-like experience. The other immediate impression is the feeling of instant power the moment you push on the accelerator,” he says. “Since there are no gears to shift and no engine to rev up, there is absolutely zero lag when driving the e-tron Sportback, just instant response.”

Once you drive it, and experience the rush of its nearly silent electric powertrain, gasoline may suddenly feel old-fashioned.

Traditional vehicle design, too, may start to seem outdated. The fastback four-door layout of the e-tron Sportback gives it the profile of a coupe, adding enhanced efficiency with an opti-mized drag coefficient, while retaining the four-door practicality and spaciousness of an SUV. 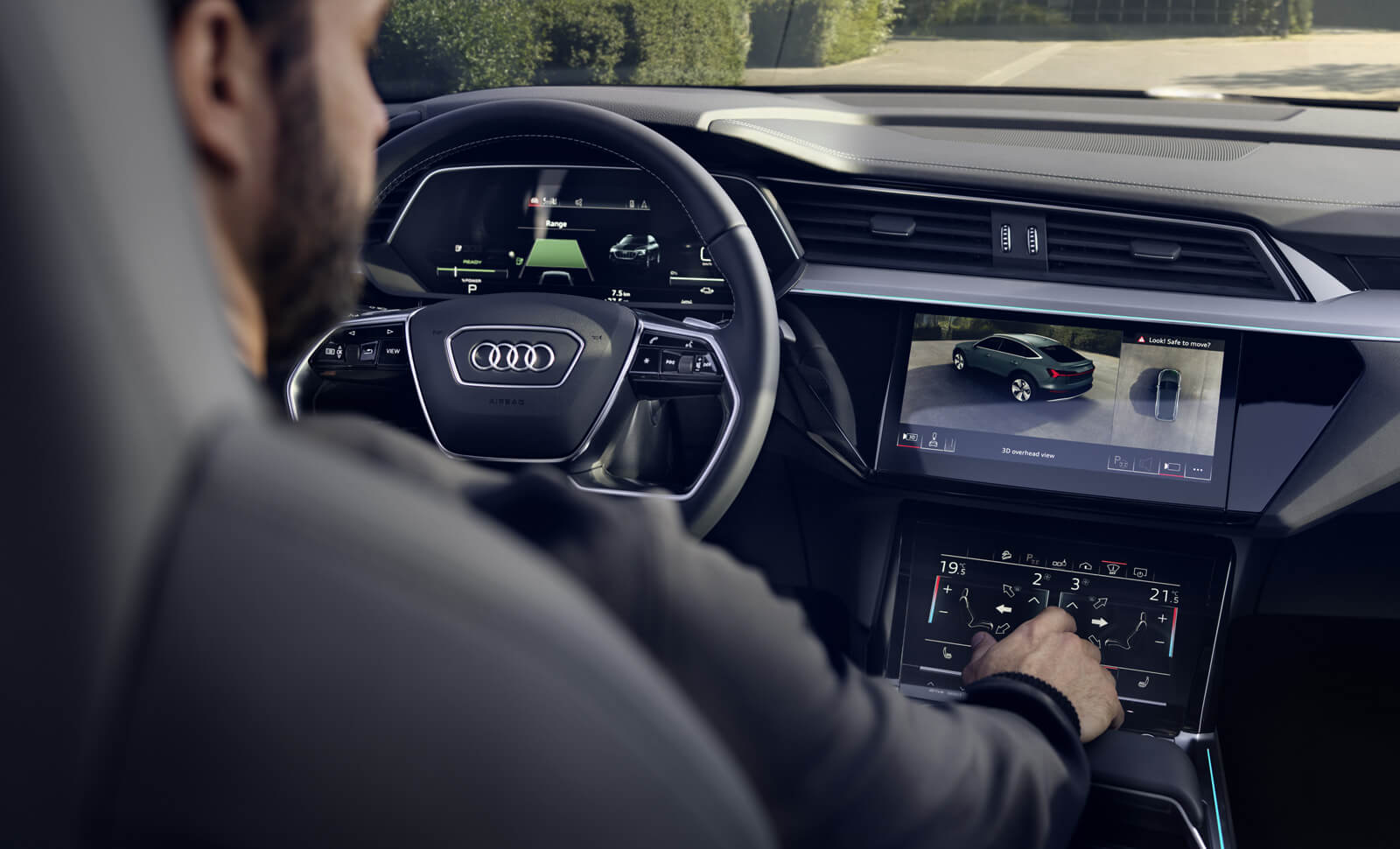 Whether it’s loading snowboards and gear for a few days at the mountain, or camping equip-ment for a long-weekend away with the whole family, this Audi is more than up to the task.

For long journeys, the e-tron Sportback can charge using direct current (DC) at up to 150 kW. E-tron Sportback owners also get two years of charging on Electrify Canada’s growing network of fast chargers that can provide an 80 per cent charge from empty in just 30 minutes.

With quattro all-wheel drive, enabled here by two independent electric motors — one power-ing the front wheels, the other powering the rears — this e-tron is ready for adventure. Neither snow, nor sleet, nor bad roads will hold you back from reaching your destination in style.

As you might expect from a German-engineered premium vehicle, no detail has gone uncon-sidered, from Audi’s latest MMI infotainment system, to the way e-tron Sportback’s charging port doors glide open like some tiny technological ballet. Even parts of the e-tron you will never see have been painstakingly optimized, from the software and power electronics to an im-proved air curtain inside the front bumper that results in greater efficiency and range. In addi-tion, the e-tron Sportback’s standard S-line package, unique wheels and sloping roof line give it a more dynamic appearance that distinguish it from its e-tron brethren.

As the boldest step yet in the electrification of Audi, the e-tron Sportback looks as if it was sent here to make us forget about the last 100 years of gasoline-powered cars. It’s easy to get ex-cited about the future when it looks this good.