Acura’s new 2021 TLX sports sedan will be significantly more powerful and more agile than the current model when it arrives this fall. It’s intended to bring Honda’s premium brand back to its original high-performance mandate, after years of focussing more on luxury than driving ability.

The new TLX will still be built in Ohio, but on an all-new dedicated platform. For the first time in 12 years, there will also be a Type S edition with even more power and better dynamics, though it won’t be available before next spring.

“When we relaunched the brand about five years ago, we started down along a path of revival and going back to our roots,” says Emile Korkor, Acura Canada’s assistant vice-president for sales and marketing. “This generation of TLX was part of that master plan.”

These are impressive numbers, but Acura held back information about the power and torque on the Type S, which will be powered by an all-new 3.0-litre turbocharged V6. Acura says that, compared to the larger 3.5-litre V6, it will deliver “dramatic gains in peak horsepower and, more critically, in torque, across the engine’s full operating range, including a more than 50-percent increase in low-end torque.” Enthusiasts are hoping that engine might break 400 hp.

Pricing is also not yet announced, but Acura says the TLX will start “in the low $40,000 range” when it comes to showrooms, expected in September. The current TLX A-Spec has an MSRP of $36,196, including Freight and PDI, rising to $47,996, including all fees.

The current TLX was introduced in 2014 as a replacement for both the TL and slightly smaller TSX sedans. Its front suspension is a conventional MacPherson Strut system, well suited for a comfortable ride, but the new TLX will have a double wishbone front suspension system connected to the steering knuckle. This will “deliver more precise control of wheel camber, caster and toe angles, and … maximize tire-to-ground contact for exceptional handling precision and cornering grip,” says Acura.

The original TL had a double-wishbone front suspension. “As you mature and develop as a brand, sometimes you make some great decisions and sometimes some decisions that could have been thought out a little bit more,” says Korkor.

American drivers will be able to buy a basic front-wheel-drive car as an option, but in Canada, the TLX will only be available with Acura’s rear-biased torque-vectoring all-wheel drive. It was always a more popular option up here: about two of every three of the current TLX model were sold in Canada with AWD.

Power-assisted steering will include a variable ratio, and brakes will be electro-servo brake-by wire, developed from the NSX supercar and replacing the current hydraulic assist system. The Type S will have larger Brembo front brakes. Adaptive damping suspension will be optional.

The TLX’s new platform is wider (by 56 mm), longer (by 74 mm) and lower (by 14 mm) than the outgoing model, with an overall increase in wheelbase of 95 mm. The basic size of the Type S is identical to the regular edition, though Acura has not yet released its track dimensions. The new car’s track is 30 mm wider at the front and 39 mm wider at the rear. Standard wheels will be 18 inches, with 19 inches as an option, and 20 inches standard on the Type S.

The entire chassis is significantly stiffer: a 50 per cent overall torsional improvement, with 100 per cent improvement where the suspension is mounted to the body. Part of this comes from an ultra-rigid new centre tunnel, and part from extra use of lightweight and advanced materials. The hood, front fenders and front bumper are made from aluminum.

Inside the cabin, there’s a 10.2-inch central control screen with a separate touchpad on the console that Acura calls its True Touchpad Interface. The instrument gauge cluster comes standard with a 7-inch information display, but a 10.5-inch display is an option.

While the new TLX is refocused on performance over luxury, Acura says it still cossets and protects its driver and passengers. An all-new airbag for the front passenger’s head acts like a baseball catcher’s mitt in front collisions, though the standard AcuraWatch driver’s assistance features will help prevent it being needed. For more mundane driving, Traffic Jam Assist keeps the new TLX in its lane at a set distance from the vehicle ahead, even in stop-and-go traffic.

The new TLX is not intended for mundane driving, however. “When we introduced the last generation (TLX) with the A-Spec, a lot of customers returned because the style and the performance elements came back,” says Korkor.

“Now, with this new TLX and the Type S, we’re actually hearing back from a lot of our old customers that it’s about time we went back to our roots. We’re anticipating a big chunk of our sales will come from those previous Acura loyalists and enthusiasts, who kind of had a little affair with the other brands but now are bouncing back.” 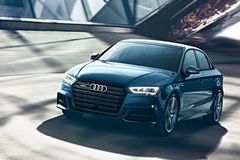 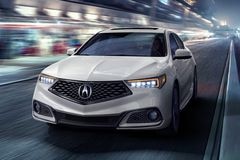