In a blue-lit studio at Cadillac’s design headquarters, the car maker’s top executives took the stage on Thursday evening to address an online audience across the globe. Cadillac’s brass were gathered to present the new LYRIQ, an all-electric show car that embodies the ambitious plans for the automaker’s future. With its long wheelbase, low roofline and distinctive array of LED lights front and rear, this SUV doesn’t just represent a new kind of song for Cadillac, but the beginning of a complete shift of genre.

While the LYRIQ (whose name is a nod to Cadillac’s prominence in music lyrics) is not destined for showrooms in its current configuration (a road-ready version is promised by late 2022), it marks a big step for the brand towards its stated goal of having an entirely electric fleet by the end of the next decade. For the moment, however, Cadillac is still playing catch-up with rivals like Audi, Jaguar and Tesla, who already have fully electric SUVs on the road.

“It’s a show car for our advanced technology, but the design, execution and materials are very much production,” says Philip Dauchy, Global Head of Brand Strategy and International Marketing at Cadillac. “Cadillac’s ambition is to be the luxury mobility leader when it comes to electric vehicles, [and] this car is the spearhead of that. [The LYRIQ] is going to usher in a whole new era for Cadillac.”

As such, the LYRIQ features a cabin dominated by a 33-inch LED screen (with, Cadillac claims, the highest pixel density available in the automotive industry), along with an augmented reality-enhanced head-up display and remote self-parking, plus Cadillac’s Super Cruise (the brand’s answer to Tesla’s Autopilot). It also features a 19-speaker AKG Studio audio system with new noise-cancellation technology. These features, plus its sleek, contemporary aesthetics, aim the LYRIQ squarely at the same tech-savvy, upwardly mobile drivers as the Audi e-tron, Jaguar I-Pace and Tesla Model Y.

While Cadillac has seen growth in Canadian sales over the last decade, mostly thanks to its popular XT4 and XT5 SUVs, it has yet to offer anything compelling for buyers looking for a hybrid or EV.

This is not for lack of trying.

Back in 2013, the American car maker created buzz around the ELR, a production plug-in hybrid coupe styled after its Converj concept. Despite the initial excitement around the ELR’s unique design, its platform was borrowed from the Chevy Volt, its all-electric range was just 60 kilometres, and it was priced at $75,000 USD. Unsurprisingly, Cadillac pulled the plug on the coupe after just two years and less than 3,000 units sold. The brand returned to the American EV market in 2017 with a Chinese-built plug-in hybrid version of its CT6 luxury sedan, but with sales of full-sized sedans waning in North America, it went largely unnoticed.

Cadillac has learned from its mistakes, says Dauchy, and the LYRIQ was designed from the ground up to offer customers the EV they want. “[The ELR] was actually a fantastically designed and executed vehicle, but when you don’t have your luxury marquee leading in technology, you’re leaving money on the table,” he says, referring to the vehicle’s Volt underpinnings. “There was [also] a price mismatch between what customers valued the vehicle at and what the starting price was. So we will not make that mistake, either. While we are not a bargain brand, we are about delivering strong luxury value.”

While the LYRIQ’s price is yet to be announced, its streamlined SUV form is exactly what Cadillac’s target buyer wants, judging by the success of similar vehicles from other luxury automakers. The brand also appears to have its technological priorities in order this time around, particularly when it comes to the all-important question of electric range.

“The batteries in electric vehicles are always the most expensive component, and in order for EVs to be commercially viable, you’ve got to get the cost down,” says Sam Abuelsamid, a mobility research analyst at Guidehouse Insights, a global market intelligence firm. The LYRIQ is the first of a wave of upcoming General Motors vehicles (the forthcoming GMC Hummer EV is another) to be powered by the company’s Ultium modular battery system, developed in partnership with South Korean battery maker LG Chem. With “pouch-style” batteries that are vertically and horizontally stackable to suit a range of vehicle designs, and an estimated range upwards of 485 km, Ultium could help make the LYRIQ a genuine EV contender.

“[Cadillac has] watched and learned what’s been successful in the EV marketplace – which is mainly Tesla – and they’ve applied that to the vehicles they’re trying to build now,” says Abuelsamid. “I think that this time around the vehicles are going to have more than enough range to be competitive.”

It will be at least a couple of years before the LYRIQ is ready to siphon off any Tesla buyers, and the electric-mobility market could change significantly between now and then. Both Cadillac and GM will have to demonstrate an uncharacteristic nimbleness to keep up. Still, for a company in need of a new hit for a new generation, the LYRIQ appears to be playing the right tune. 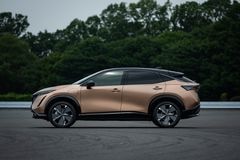 Audi pegs the new Q4 e-tron Sportback as a ‘cornerstone’ of its electrification strategy and a strong Tesla rival
July 7, 2020 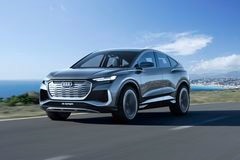 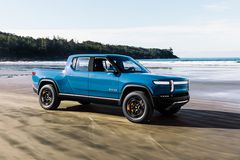