The electric truck wars are shifting into high gear. But it’s not just upstart players like Tesla, Rivian, and Nikola who are trying to get electric pickups on the road. Ford has launched its much-anticipated all-electric F-150 Lightning, a name which also harkens back to the automaker’s iconic high-performance trucks from the 1990s and early 2000s. The company is banking that the gas-powered F-150′s track record of being Canada’s best-selling truck for 55 years will also help the electric version drive to the top of the heap.

Compared to the competition, the Ford F-150 Lightning is rather subdued in its design. It flies under the radar, looking similar to its gas-powered siblings. It doesn’t have the over-the-top, sharply angled futuristic look of Tesla’s Cybertruck or trendy features like the Bollinger B2′s foldable and removable body panels, doors, and windows. Instead, the F-150 Lightning has subtle styling cues to distinguish it from its family including unique grille designs with no air intake openings, LED lightbars that run across the front and rear end on higher-trim models, and newly-shaped running boards.

The decision to stick with a similar design was intentional, says Jasen Turnbull, F-150 Lightning marketing manager at Ford Motor Company. “We designed the truck to be distinct, but not different,” he says. Based on extensive research with F-150 truck customers, they wanted the toughness and familiar feeling of a traditional F-150, but with more modern features.

Ford has delivered on the modern front with high-tech features such as over-the-air software updates, wireless Apple CarPlay, Android Auto, integrated Amazon Alexa and a unique front trunk, or “frunk.” With no traditional engine under the hood, there’s a large, lockable storage space with power and charging capabilities – we’ve never seen that on an F-150 before. The frunk has 400 litres of space and 400 pounds of payload capacity. That means there’s enough room for two sets of golf clubs or one large checked suitcase and two carry-on bags. There are D rings on the drainable floor, cargo hooks on the side, a non-skid removable floor mat, and an underfloor bin to keep small items from rolling around. The bin lid is also multi-positional so you can remove the lid and store deep, taller items inside, too. Four electrical outlets and two USB chargers can turn this space into a mini work station. With 2.4 kW of power, you can run power tools, TVs, laptops, or even coffee makers or crockpots for the ultimate tailgate party. With the Pro Power Onboard generator there’s 9.6 kilowatts of total power in the truck – 2.4 kilowatts in the frunk and up to 7.2 kilowatts with the built-in electrical outlets in the cab and bed.

Two battery options will be available in the F-150 Lightning: a standard-range battery with 370 kilometres of range and an extended-range battery with a longer range of 483 kilometres. Sure, 370 kilometres might not seem like a lot – the Tesla Cybertruck with its tri-motor AWD version is estimated to get 805 kilometres with its long-range battery. With 370 clicks, range anxiety might set in, especially when you consider that number will drop when travelling at highway speeds, with the air conditioning running, and five people in the SuperCrew cab. To combat range anxiety, the Onboard Scales with Intelligent Range seems like a wise option to get. The system uses the truck’s sensors to factor in, among other things, the weather, traffic, payload, and towing weights, to estimate an accurate electric driving range that’s available.

Charging is fast and simple – plug it into a regular dryer outlet or fast charger at home or at a public charging station. On the road, using a Level 3, 150-kilowatt DC fast charger, the extended-range F-150 Lightning is targeted to charge from 15-80 per cent in about 41 minutes. Using a Level 2 charger at home, will take anywhere from eight to 19 hours to charge from 15-100 per cent.

The F-150 Lightning will roll off the line at Ford’s new high-tech Rouge plant in Dearborn, Michigan. It will arrive at Canadian dealerships in late spring of 2022, starting at $58,000 for the commercial-oriented entry model and $68,000 for the base XLT trim. 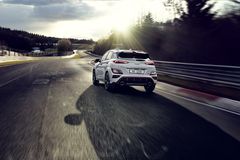 Ford’s Explorer Timberline makes the everyday an adventure
May 5, 2021 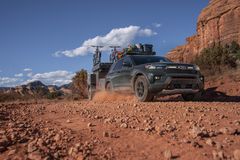 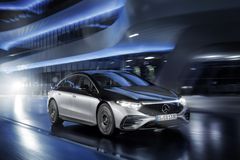