There are plenty of concepts and ideas for the future here at the Tokyo Motor Show, but relatively few solid debuts of new vehicles. After all, in the words of one automaker, this is “a once-in-a-century transformation” for the industry, as vehicles focus on electricity as a fuel and computers as drivers.

Electric motors mean there are no driveshafts and gear boxes, so vehicles can have flat floors that open up their cabins. Computers doing the driving means more amenities to occupy the passengers, and even more smartphone integration to keep them connected.

The concepts at least are closer to production than usual, though the manufacturers are reluctant to lock down a final version or a release date for the new technology. Nissan’s Ariya crossover concept, for example, is “very, very close” to final production and will probably come to Canada toward the end of 2021, but there are no estimates of driving range or charging times. It’s just understood it will have the best battery technology that Nissan can figure out by then.

The Ariya will be a sleeker, sexier, larger, all-electric alternative to the well-established Leaf. It’s a new design direction for the brand and it does things quite differently. The grille is now a “shield” and it houses all the sensors that detect other vehicles on the road. The dashboard is a smooth panel that integrates touch controls, which disappear when the car is not in use. The only physical controls are a start button, a controller knob for the central display, and touch buttons for the climate control.

There’s plenty of space inside because the floor will house the batteries and the two electric motors will be at each end of the vehicle. It’s 4,600 mm long and 1,920 mm wide, but because this is still officially a concept, that can always change. It probably won’t, though.

It will be equipped with Nissan’s ProPilot 2.0 semi-autonomous driving system, which allows both hands-off operation and automatic lane changes past slower vehicles. Nissan is catching up to Tesla’s latest V.10 autonomous system here, but refuses to rush the process. There’s a lot at stake for getting it right first time out, and Tesla’s already been embarrassed by its cars bumping into things with the V.10’s remote summoning feature.

Nissan also showed off a smaller, boxier concept called the IMk, but like many of the vehicles on stage here, this is a car intended for the Japanese market only. Japanese buyers are content with smaller vehicles and smaller engines than North Americans, though some domestic market vehicles also find their way to Europe.

Honda revealed the next generation of the Fit, which will probably come to Canada next year. It has more of a crossover feel than the current model and is available as a hybrid. It’s unusual for automakers to offer such small cars as hybrids – the extra technology is costly and fuel consumption is already minimal – but clearly Honda is catering to regulatory demand for electric driving.

Mazda went a step farther and introduced the MX-30, its first all-electric crossover, and it’s confirmed for production as soon as possible. Like Nissan’s Ariya, there are no claims for battery range or charge times, but it’s an attractive, compact hatch that has rear suicide doors – sorry, “freestyle doors” in Mazda-speak – that open forwards like the RX-8. The flat floor and spacious cabin is supposed to be “a space that settles the mind when you get inside,” said the presenter. That will be welcome on the morning commute.

Perhaps the only conventional car introduced at the show was the Subaru WRX STi Final Edition, which is the last version of the STi with its current EJ20 flat-four turbo engine. It features unique badging and 19-inch gold wheels, and will be sold by lottery to a limited number of buyers.

Pretty much every other vehicle introduced here is a concept, and at least a couple are living rooms on wheels, with swivel seating and spacious carpeting. The Suzuki Hanare doesn’t even bother with a steering wheel, and has high windows for privacy and a giant television-like screen. Who needs to watch the scenery, or the other traffic? The Mitsubishi Super Height K-Wagon does at last have an engine and fixed seating, but if it does make it to production, don’t expect it to ever leave Japan.

Perhaps the wildest concept at the show is the Mitsubishi Mi-Tech. It looks like a dune buggy and has a gas-turbine engine to help power its four electric motors. Each wheel has its own motor, so each can spin independently from the others, allowing it to turn on its own axis. Now that could be useful in traffic.

The ID.3 isn’t as revolutionary as Volkwagen would have you believe, but it marks a new beginning
September 18, 2019 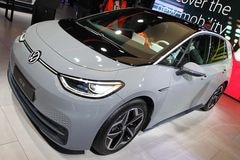 China out in force at Frankfurt car show, led by battery builders
September 11, 2019 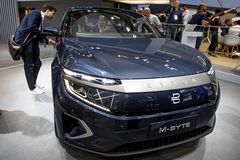 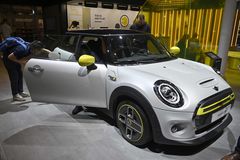