Weekend warriors, back-country adventurers and aspiring gentlemen farmers, rejoice. After decades of deprivation, the Land Rover Defender will finally be available in Canada. Why is this a big deal? For those unfamiliar with the legacy of this burly, boxy and beloved British four-by-four, here’s some essential background.

Shortly after the end of the Second World War, Maurice Wilks set out to develop a new kind of off-road vehicle. Wilks, who was chief engineer at the British car manufacturer Rover Company, was a devoted fan of the Willys Jeep and, being the patriotic chap that he was, wanted to see if Rover could build something just as good on British soil. One day at the beach, or so the legend goes, he sketched on the sand a box on wheels – he was an engineer after all, not a designer – and an icon was born.

Wilks’s vision was for a simple, tough and reliable vehicle like his Willys that could go anywhere. The vehicle he unveiled in 1948 at the Amsterdam Motor Show, called simply the Land-Rover, was true to those ideals. Rebranded as the Defender in the early 1990s (to better differentiate it from the growing family of Land Rover models), it would remain in uninterrupted production until the final vehicle rolled off the line in 2016. The all-new 2020 Land Rover Defender, redesigned from the ground up and unveiled this week to much fanfare at the Frankfurt Motor Show, reveals just how far Wilks’s idea has come.

While technology and tastes changed dramatically over the vehicle’s 68 years of production, the Defender itself stayed pretty much the same, much to the joy of its countless fans and owners around the globe (including, famously, the Queen of England and most of her extended family). Unlike its more luxurious Range Rover siblings, the Defender was designed as a workhorse and remains so at home in Great Britain, where it’s a ubiquitous sight on farms, country estates and job sites.

Here in Canada, however, Defenders have always been in excruciatingly limited supply, resulting in the vehicle becoming a much-sought collector’s car. Despite their ubiquity elsewhere, only a handful of Defenders were sold new in Canada over a two-year period in the early 1990s. As a result, low-mileage models that find their way to Canadian shores now reliably fetch several times what they would in the U.K. This makes them far too valuable for most people to ever dream of mucking them up, let alone subjecting them to the ravages of Canadian winter roads. With North America predicted to be the 2020 Defender’s biggest market, the new model is designed to take rarity out of the equation and give adventuresome urbanites exactly what they want.

“A difficult task, replacing an icon,” observes Gerry McGovern, Land Rover’s chief design officer. His solution to this challenge was to acknowledge the vehicle’s rich and storied past while moving unapologetically towards the future. “We’re very mindful of our heritage, but at the same time we can’t be held back by it. [The Defender] is about looking forward.”

As such, the 2020 Defender immediately appears much more new than old. Its boxy silhouette, short overhangs and abbreviated wheelbase still draw clearly from Wilks’s fabled sketch (and the Jeep that inspired it), but it’s a thoroughly modern vehicle in every other way. Rounded corners, metallic accents and a satin exterior finish recall the graceful lines and luxe details of modern bestsellers like the Range Rover Evoque, suggesting this new Defender is intended to be as much at home at the valet stand as in the backcountry.

“What we tried to do is give it that sense of boundless adventure that comes with a Defender,” says interior design director Alan Sheppard, who came to Land Rover after serving as chief interior designer for Rolls-Royce. While the outgoing Defender’s cabin was famously austere, the new one sports a die-cast magnesium dash panel boldly stamped with the word Defender; a massive infotainment screen dead centre; and a suite of high-tech voice-controlled software with full 4G connectivity. Visible screw heads punctuate the door panels, giving a deliberately utilitarian look, but this feels more like an homage to utility than the real thing, especially when paired with the optional open-grained walnut-trim door pulls. “It’s not the rough old Defender that it was,” admits Sheppard, pointing out that there are now more USB ports than there are seats. “I think people expect a bit more comfort now.”

Despite concessions to comfort and convenience, the makers of the 2020 Defender are quick to point out that the vehicle has still got it where it counts, with off-road chops to satisfy the most ardent adventurer (and more than enough to get you out of your driveway after a big snowfall). It can, Land Rover claims, clamber over boulders, wade through up to 900 millimetres of water and conquer gradients up to 45 degrees, all while carrying 300 kilograms of gear on its sturdy roof rack, should you so choose.

When the new Defender finally comes to Canada next spring, there will be two engine choices: either a 2.0-litre turbocharged inline-four engine that creates 296 hp, or a 3.0-litre inline-six turbo available as a 48-volt “mild hybrid” with an electric supercharger that creates 395 hp.

Jaguar Land Rover has a company-wide mandate to offer an electrified version of all its models by 2020, and the Defender is no exception. North America will not, however, get the diesel engines sold elsewhere. There will be no manual transmission offered, with only an eight-speed automatic transmission available.

There will also be two physical sizes of the SUV. The two-door will be known as the “90” and the four-door as the “110.” In Canada, we’ll get the four-door for sale first, which can seat either five or seven people. The two-door can seat two, four or five people, and if a special folding middle seat is ordered that replaces the centre console in the front row, it can seat six.

Only five of six trim levels will be available in Canada, varying from basic to luxurious. Pricing starts at $65,300, ranging up to $93,600 for the most kitted-out trim.

It’s a far cry from the cheap, utilitarian four-by-four Maurice Wilks envisioned, a fact which will no doubt continue to drive vintage Defender prices through the roof. But the 2020 Defender is also quite a bit better in just about every measurable way. And more important for Canadians, we don’t need to be related to the Queen any more to get our hands on one.

With files from Mark Richardson 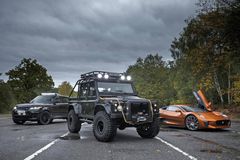 Last Land Rover Defender rolls off production lines in UK
January 29, 2016
Follow us on Twitter @globedrive Opens in a new window
Report an error Editorial code of conduct
Due to technical reasons, we have temporarily removed commenting from our articles. We hope to have this fixed soon. Thank you for your patience. If you are looking to give feedback on our new site, please send it along to feedback@globeandmail.com. If you want to write a letter to the editor, please forward to letters@globeandmail.com.
Comments