The Beijing International Automotive Exhibition is a barometer of the state of the world’s biggest passenger-vehicle market. New cars are launched, startups vie for attention against their multinational rivals. This year’s show is significant for some key reasons: China is beginning to open up its auto market after two decades of restrictions on how much foreigners can own in local car ventures; electric vehicles are beginning to gain steam; and there’s the looming threat of a trade war.

Bloomberg News captured the pulse of the show throughout the main press day.

Porsche may have built its race-car reputation on two-seaters such as the 911, but it’s been SUVs such as the Cayenne that have made China the top market for the German luxury car maker. Now sales of the smaller cars are starting to take off too. While there’s no room for the chauffeur, “demand for our two-door sports cars, the 718 Cayman and Boxster, is developing extremely well,” according to head of sales Detlev von Platen.

The cream of the crop

From ultra-luxury to sleek and speedy, it was all there. A plethora of electric SUVs, some startlingly striking grills and a particularly interesting paint job are among the exhibits. The race to an all-electric future is more evident than ever, as startups take on their multinational rivals in a bid to attract eyeballs.

China’s policies are boosting a rapid move toward electric vehicles in the world’s biggest car market as new technologies emerge, Aston Martin Holdings Ltd. Chief Executive Officer Andy Palmer said. “This whole show is revolving around what they call new energy vehicles, but Chinese policy is very much driving the move toward electric cars and certainly Aston has to go with that flow,” Palmer said in a Bloomberg Television interview. “We’re probably in the biggest change in the automotive industry since we moved from horse to car.”

The Red Flag is now green

Months after calling off a planned partnership with Tata Motors Ltd., Volkswagen AG signalled it hasn’t shut the door on a tie-up with the Indian auto maker as it works on a strategy to bring budget cars to millions of cost-conscious buyers. Volkswagen, which has been long considering making affordable models for India, will decide on its game plan in the first half of this year, said Bernhard Maier, chief executive officer of Skoda Auto AS, part of the VW group.

BMW to build electric SUV in China, export it

Just as China’s trade relations with the U.S. are at their worst in years, BMW AG is laying the groundwork to start exporting from its biggest market to buyers around the world including North America. The car maker plans to begin producing its first all-electric sport utility vehicle, dubbed the iX3, in 2020 at its joint venture in China and will sell the model abroad, according to partner Brilliance China Automotive Holdings Ltd. The concept was unveiled Wednesday in Beijing.

Even with no Musk, Tesla draws a crow

No media conference, no product launches, no appearance by Elon Musk – yet Tesla Inc. attracted much of the attention as China’s biggest car show kicked off. The car maker is participating in the Beijing auto show for the first time and surely a crowd gathered around a blue Model X, red Model 3 and white Model S. Tesla doesn’t manufacture in China, yet. The carmaker is widely seen as a beneficiary of the rule changes coming on joint venture partnerships.

No one can do it alone, Jaguar boss says

While automobiles currently have a lot of driver assistance built in, they don’t offer fully autonomous-drive features, Jaguar Land Rover Chief Executive Officer Ralf Speth says. Governments, researchers and the industry need to collaborate across sectors to develop a safe technology. The company, which is teaming up with Waymo to develop autonomous vehicles, is testing the technology predominantly in the U.K. and sharpening efforts to make the roads safer with such cars.

A tried-and-tested approach by the Japanese

To conquer the world’s largest electric-vehicle market, Japan’s car giants are starting by playing it safe. Instead of betting on new models to lure Chinese customers, Nissan Motor Co., Toyota Motor Corp. and Honda Motor Co. are slapping electric motors on cars that are already doing well as gasoline versions. These include Nissan’s Sylphy sedan, and a plug-in version of Toyota’s long-time hit Corolla.

The founder of Chinese startup Qiantu Motor is jostling for a slice of the world’s biggest electric-vehicle market, and says the race for leadership in the industry has barely started. The company is set to kick off sales of its 700,000 yuan ($111,000) K50 sports car in July. The battery-powered model accelerates from zero to 100 kilometers in 4.6 seconds and can reach a maximum speed of 200 kilometers per hour. It has a range of 365 kilometers on a single charge.

Whoever proclaimed the death of the sedan forgot to tell Chinese Lexus buyers. Toyota’s premium brand is launching the seventh generation of its mid-sized ES saloon into a market where sales of the model have almost doubled over the past two years.

Maybach was the first off the blocks, extending the ultra-luxury badge with a crossover, complete with a porcelain tea service embedded in a heatable ebony-wood tray. Aimed squarely at any billionaires perusing the Beijing show’s offerings this week, the concept model includes optional white nappa-leather lie-flat seats with massage and aroma-therapy functions. Mercedes isn’t commenting on when it’ll decide on offering the vehicle.

VW is shifting into overdrive, bolstered by spending at its Chinese joint ventures as the German car maker seeks an edge in producing electric, self-driving autos. The partnerships’ technology investments in the next five years will total $18-billion, Jochem Heizmann, head of Volkswagen’s business in China, said Tuesday at a new-model presentation in Beijing.

Chinese billionaire Li Shufu has catapulted from founding his Geely Group as a refrigerator maker in the 1980s to owning Volvo Cars, British sports car maker Lotus, London Black Cabs and the largest stake in Daimler AG – the inventor of the automobile. Now he is spearheading China’s aspirations to wedge itself among the big three of the global car industry – the U.S., Germany and Japan – so they become the Big Four. 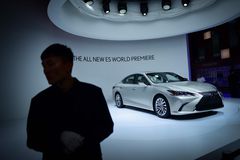 China auto show highlights industry’s electric ambitions
April 23, 2018
Report an error
Due to technical reasons, we have temporarily removed commenting from our articles. We hope to have this fixed soon. Thank you for your patience. If you are looking to give feedback on our new site, please send it along to feedback@globeandmail.com. If you want to write a letter to the editor, please forward to letters@globeandmail.com.
Comments are closed