Cadillac unveiled the latest addition to its lineup in advance of the New York International Auto Show this week, but it’s still playing catch-up.

“Ladies and gentleman, I trust that you can sense there is a vibrant energy taking root at Cadillac,” Cadillac president Johan de Nysschen announced in his South African drawl to a packed room at Cadillac House, the brand’s New York headquarters and event space. The occasion was the reveal of Cadillac’s new small SUV, the XT4, a vehicle designed to make the stalwart American brand stand out to young, upwardly mobile consumers. “We think that it’s an absolutely perfect match for an iconic American luxury brand to find itself here in SoHo in the heart of Manhattan, a city where global trends are established. We want to be part of that creation.”

As trends go, there’s nothing hotter than the small-SUV segment right now, with much-anticipated additions from Volvo, Lincoln, Volkswagen and Lexus this week in New York. Grey-haired, mustachioed and pushing the age of 60, neither de Nysschen nor his teleprompted remarks appear particularly savvy to the whims of the young and fashionable. Fortunately, the XT4 makes a much more convincing statement in the flesh.

While a 2017 study by Strategic Vision Inc. claimed that Cadillac’s average buyer was 59, de Nysschen boasts that more than half of the brand’s recent customers are members of Gen X and Gen Y. Regardless of who is actually buying Cadillacs right now, the American and Canadian customers it aims to attract with the XT4 are 35 to 45. In China, where Cadillac claims it is now the country’s fastest-growing luxury brand, that age range skews down to 25. To create a design to appeal to this demographic, Cadillac employed a remarkably direct approach: a team of designers who are also the car’s target buyers.

“The assignment was for the young designers in our studio, and we asked them what they wanted to drive,” says XT4 exterior design manager Therese Pinazzo, whose team ranged from 23 to 31 years old. “They sketched what they would want it to look like and feel like.” The result, she says, strikes a balance between traditional luxury and modern dynamism. “It exudes Cadillac’s DNA, but with a new boldness that speaks to the youthfulness of its team and its customers.”

With a wide, commanding stance, wheels pushed to its corners and dramatic LED lighting in front and rear, the new XT4 is meant to be eye-catching and futuristic, especially in the orange Autumn Metallic paint of the New York auto show’s presentation model. “I want someone to have an emotional reaction to it,” Pinazzo says. “It’s more of a statement, and we feel that that’s a good thing for this age range of customers. We feel like we’re more expressive than our direct competitors.”

Expressiveness is subjective, of course, but the XT4 also aims to deliver in more concrete terms. With more than 1,000 millimetres of second-row legroom, Cadillac expects to lead in its class. A wide track width, meanwhile, provides a stable, firmly planted ride. Naturally, it’s also filled with the kind of leading-edge connectivity features that young, smartphone-happy buyers demand: a pair of USB ports front and rear, plus wireless charging and near-field communication for easy device pairing. Optional extras like a camera-integrated rear-view mirror, an in-cabin air ionizer and surround vision add techy appeal.

While a variety of exterior and interior finishes is available in the Premium Luxury and Sport trims, all XT4s will arrive at dealerships this fall with a turbocharged four-cylinder engine paired to a nine-speed automatic transmission. Producing 237 horsepower and 258 lb-ft of torque, it’s comparable to – albeit slightly less powerful than – the motors in Audi’s Q5 and BMW’s X3.

There’s plenty to appreciate about the newest member of Cadillac’s family, of course, but in a segment dominated by so many bestsellers, the auto maker is decidedly late to the small-SUV party. Cadillac’s research, however, suggests that younger buyers will be interested in the XT4 for just that reason.

“It actually surprised me, when we started talking about the Cadillac brand, that there was a lot of openness,” XT4 product manager Steven Mertes says. “There’s also a distinct portion of potential customers that were open to the brand because they were tired of Audi, Benz and BMW. You don’t necessarily want to drive what your parents drove, and there’s a surprising willingness to try Cadillac as a brand.”

For all their fickle tastes and adeptness at sniffing out marketing, that’s one good thing about courting millennials: They’re not old enough to be set in their ways.

Sign up for the weekly Drive newsletter, delivered to your inbox for free 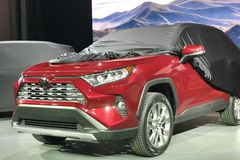