The race to create an electric pickup truck is on, and the stakes could not be higher. The problem is that nobody’s sure if people will actually buy electric pickups.

Newcomers including Tesla, Rivian and Bollinger Motors are jumping into this potentially lucrative market, as are established brands such as Ford, Nissan and General Motors. Most of those companies are targeting 2021 as the year they’ll put electric trucks on the road.

As far as the planet is concerned, electric pickups can’t come soon enough. The popularity of SUVs and pickups is the reason that transportation is among the fastest-growing contributors to greenhouse gas (GHG) emissions, which are pushing the world into a climate crisis.

Canadians have bought more than 330,000 new pickups so far this year, according to GoodCarBadCar data. In America, more than 2.3 million pickups have rolled off dealer lots this year alone, and every one of them was powered solely by an internal-combustion engine burning gasoline or diesel. No major automaker has a plug-in hybrid truck on the market right now, let alone an all-electric option.

Electric pickups could go a long way toward reversing the troubling trend of rising greenhouse gas emissions, but only if they become as wildly popular as their gas-guzzling predecessors. Right now, that’s a big “if.”

“Trucks have been the same for a very long time, like 100 years,” Tesla’s chief executive Elon Musk said at the bombastic unveiling of his company’s first pickup. “We need something different.”

Tesla’s wedge-shaped, stainless-steel pickup – called the Cybertruck – is certainly different. It has an angular, covered cargo bay and a claimed towing capacity of more than 6,350 kg, which bests the maximum 5,987 kg of the 2019 Ford F-150.

The Cybertruck will be available with up to three electric motors, a range of 800 kilometres in the high-end model, and will be capable of sprinting from 0-100 km/h in around three seconds. The company will also sell you an electric ATV that can be driven into the truck bed.

Deliveries are supposed to begin in 2021, with prices starting at US$39,900 for the rear-wheel drive model with 400 km of range.

Tesla’s launch event in Los Angeles on Nov. 21 – taking place at the same time and location as the sci-fi movie Blade Runner – didn’t quite go as planned. The Cybertruck’s windows smashed onstage during a demonstration meant to show how strong they were.

Meanwhile, U.S.-based startup Rivian is on track to beat Tesla – and everyone else – to market. The company came out of stealth mode late last year with its R1T pickup and R1S SUV, and has been gathering momentum and capital ever since. Amazon and Ford are both big investors.

Rivian has said it will begin production of its electric pickup at its factory in Normal, Ill. in 2020.

The design of the R1T makes the most of the packaging opportunities afforded by compact electric powertrains. Just behind the cab, a tunnel that runs the width of the truck can be outfitted with different modules, one of which is a slide-out camping kitchen powered by the car’s battery.

Another contender is Bollinger Motors’ electric pickup, which is more of a niche proposition. The Detroit-based company is vying to sell an ultra-rugged US$125,000 truck called the B2, which feels more like a military-grade Hummer than a consumer product. All four doors are completely removable, and there’s a tunnel that runs through the truck – through the bumper, cabin, and out the back – in case you need to cart around a telephone pole or something like that.

“We wanted to go low volume,” says company founder and chief executive Robert Bollinger. When he founded the company in 2015, he knew the big manufacturers would build electric pickups eventually, but he wanted something different. “We just built a truck that had everything we want in it, and, you know, screw how much it’s going to cost – who cares? That’s, like, the coolest truck ever,” he says enthusiastically.

The founder adds that he is bootstrapping it himself, having so far put “tens of millions” of dollars into the project. The company, which is much smaller than Tesla or Rivian, hopes to deliver its first vehicles to customers in 2021.

As for the established automakers, we don’t know much about the electric pickups from Ford, GM or Nissan, other than that they’re coming. Other brands are sure to follow.

“These aren’t like toys, or weekend-excursion-to-the-beach type trucks,” Cannis says. Although Ford has invested in Rivian, he says Ford was already working on an electric F-150 and that it’s being developed separately.

As for how much the electric F-150 will cost or when it will be in showrooms, he wouldn’t comment. He did say, however, that customers can expect it to look very much like any other F-150.

Electric cars have been on the road for more than 10 years now. There are electric cars of all sizes in showrooms, and a growing number of battery-powered SUVs too. Some might consider it strange, then, that although pickups are consistently the best-selling vehicles in North America, there is not a single electric truck on the market.

It comes down to regulation, according to Sam Abuelsamid, principal mobility analyst at consulting firm Navigant Research. Many of the first electric cars launched in 2010 and 2011 were “compliance vehicles.”

“Companies are starting to look at, ‘What do we have to do to make people actually want to buy EVs, and make enough of them to make them profitable?’” says Abuelsamid. The answer, of course, is trucks and SUVs. “It’s why you’re seeing the [electric] Mustang Mach-E and the proliferation of electric pickup trucks ... If you can build an electric pickup that consumers want – and sell it – you have an opportunity to kill multiple birds with one stone: meeting regulatory requirements for EV sales and making something people want to buy that’s profitable.”

That the likes of Ford, GM and FCA could get beaten to the market by upstarts like Tesla and Rivian doesn’t surprise Rivian’s founder and chief executive R.J. Scaringe.

“Look at Ford, they’re selling a hugely successful product, the F-150. It’s so successful that it’s hard for them to rationalize doing a completely different vehicle that will not sell 900,000 units a year,” Scaringe said in an interview last year. “It’s a classic incumbent dilemma.”

Winning over traditional pickup customers, who are typically very loyal to their particular brand, will be a challenge for any startup.

“Toyota has been trying to crack the full-size truck market for 20 years, and they’ve barely made a dent,” says Abuelsamid. “I think Elon Musk maybe has some grand vision of making the new F-150, but I think he’ll have a hard time with that ... I think Rivian has the best potential to get a decent chunk of that market, although they don’t see themselves selling F-150 volumes.”

The biggest unknown in all of this is drivers.

“Our customers – when you sell almost 900,000 F-series vehicles every year – they come in all types, and there are many early adopters. There are many that are concerned about the climate,” says Ford’s Ted Cannis. “I know so. We’ve done tons of research.”

Trucks are as much a part of the culture as blue jeans and apple pie. They are the workhorses of the American dream. They’ve been the same for 100 years because people like them; because they work. Are we really ready to buy electric pickup trucks?

“That’s the multi-billion-dollar question that everybody is worried about right now,” says Abuelsamid. 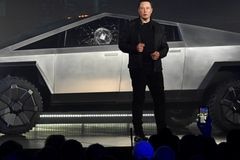