We just got a 2018 Subaru Crosstrek. I went to Safeway and I couldn’t lock my car with the fob. I locked it manually and when I came back, it wouldn’t start. The lady inside the store said a lot of people had been experiencing the same phenomenon. She thinks it’s somebody doing it deliberately and taking stuff from inside these unlocked cars. Maybe it’s just a cell tower interfering with the signal, but could somebody be using a radio frequency jammer? – Jim, St. Albert, Alta.

It’s possible crooks could be using tech to get into your car – but, usually, they don’t have to.

“For the most part, there’s not really any need because most people leave their cars unlocked,” said RCMP Inspector Brian MacDonald, with British Columbia’s Integrated Municipal Provincial Auto Crime Team (IMPACT). “Your biggest risk is leaving your vehicle unlocked and leaving things in it, rather than somebody coming along and using magic to make the thing not work.”

There have been reports in the United Kingdom of crooks using radio frequency jammers, which have a range of about 75 metres, to block the signal from wireless key fobs so they don’t lock car doors.

Jammers are illegal – it’s a $5,000 fine – but, like most illegal things, they can be bought on the internet.

We checked with police. The RCMP in St. Albert, just outside Edmonton, hadn’t heard of thefts using jammers.

We also heard back from police in Vancouver, Calgary, Toronto and Montreal. Vancouver and Calgary had no reports. Toronto didn’t have the information immediately available. Montreal said there’d been one case this year but “it is not considered a problem.”

As you might have seen in breathless e-mail forwards, it’s also possible for thieves to use a device to intercept the signal when you lock your car — and then use it to unlock your car and break in.

“It’s really rare — we know it can happen, but it’s most prevalent in Europe," MacDonald said. “We went out and had one made to see if it would work — it does, but it needs two people, one near the driver and one near the car. Most of our people are not that bright.”

Instead, most thieves “just try doors to see if they’re unlocked” or break windows, he said.

The bulk of cars that get stolen are usually either pre-2007 models — when Transport Canada started requiring engine immobilizers that prevent hot-wiring — or cases where thieves somehow got a key, MacDonald said.

“They’ll break into gym lockers,” he said. “Or, people have left the car running — or they’ve left a spare key inside the car.”

So could a cellphone tower be the culprit? Steve Elder, an automotive instructor at BCIT, doesn’t think so.

“They operate on two different frequencies, in the 300-MHz range for [keyless entry] and around 800-MHz for a cellphone,” Elder said in an e-mail.

The Crosstrek’s owner’s manual says “strong radio signals in the surrounding area” or a low battery can stop the fob from working.

To get in, you need to use the physical key hidden in the fob. Once you’re in, you should be able to start the car by holding the fob directly against the start button.

Whatever the cause, if you can’t lock your car — or you didn’t even notice that it didn’t lock — and it gets looted, or stolen, your insurance company should still cover it, the Insurance Bureau of Canada said.

Still, you should always take your valuables with you, and that doesn’t just mean that bag from the Apple Store.

“Take the keys, the registration papers and the garage door opener,” MacDonald said. “You can get small [garage door openers] that go on the keychain that you can keep with you — because if they get it, they can get into your house.” Why don’t people get it? Leaving children and pets in hot cars can be lethal
July 16, 2018 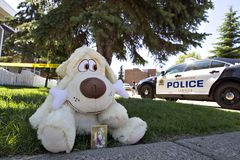