Second in a series on modern automotive technology

Even the most fastidious driver can have the occasional near-miss accident when changing lanes by not seeing another car in their blind spot. Unfortunately, no one’s head comes on a swivel.

To make matters worse, the bigger the driver’s vehicle is, the larger those blind spots are. With North Americans snapping up SUVs and trucks in record numbers, the magnitude of the issue is only growing.

Blind-spot detection systems are starting to proliferate in newer vehicles as a result. With large gaps in what drivers can physically see around them while in motion, having another set of eyes – even if they are technological – is proving to be a valuable addition.

A blind-spot detection system monitors a car’s flanks – the areas behind and to either side that a driver is least likely to be able to see in their mirrors.

Such systems passively inform the driver if there are vehicles in those blind spots. Some also emit active alerts if the driver attempts to change lanes anyway.

Blind-spot detection systems generally don’t come standard in cars, but rather as options that are often bundled with other sensor-based safety features such as lane-departure warning and rear-collision avoidance.

Blind-spot systems depend on radar sensors mounted in the right and left sides of the car’s rear bumper. The sensors identify traffic and the car’s onboard computer calculates the speed of oncoming vehicles.

The driver gets a visual notification, usually in the form of an orange or yellow light on the relevant side of their vehicle, when traffic is detected in a blind spot. Many automakers put these lights within the side-view mirrors themselves.

If the driver somehow doesn’t see the visual notification and signals a lane change regardless, a beeping audio alert warns them of the danger.

“It’s saved me a couple of times,” says Scott Pak, senior product planning manager for Nissan North America. “It tells you you’re attempting a lane change with the turn signal on, but you have someone in your blind spot.”

Drivers missing cars and other traffic in their blind spots is responsible for a large number of accidents and fatalities. According to 2013 statistics from the National Highway Traffic Safety Administration (NHTSA), about 840,000 accidents and 300 deaths are attributable to blind-spot issues a year in the United States.

The simple idea behind blind-spot detection systems is to cut down on those accidents by improving the driver’s visibility around their vehicle.

“Looking over your shoulder, looking forward and maintaining 360-degree awareness isn’t the easiest maneuver to do,” says Scott Lindstrom, manager of driver-assist technologies at Ford. “It’s by far our most popular feature. It’s simple to use, intuitive and universally helpful.”

The automaker also says older and less-mobile drivers are especially liking the technology.

“Some of our older customers can’t look over their shoulder as easily … so anything you can do to make that easier is sure to be appreciated,” Lindstrom adds.

The sensors’ other benefit is that they keep drivers looking forward at the road, rather than off to the side and behind.

“They help you re-engage,” says Terry Tizard, manager of Hyundai Performance Academy for Hyundai Canada. “This kind of feature is the sort of thing that reminds us there’s lot of things going on around us and we need to be engaged while driving.”

There are no regulations yet in North America that require blind-spot detection systems in cars, but it may not be long before that changes.

The U.S. NHTSA’s New Car Assessment Program (NCAP) is looking to include the technology as part of its safety-rating system, where new vehicles would have to include it in order to qualify for a full five-star score.

The organization was targeting 2019 as a beginning date, Pak says, but that has been pushed back.

The ASEAN NCAP, a similar safety standards body that oversees Southeast Asia, added blind-spot detection to its testing protocols this past March.

The organization hopes the technology can help decrease the high number of motorcycle fatalities in the region, many of which are attributed to drivers missing traffic in their blind spots. 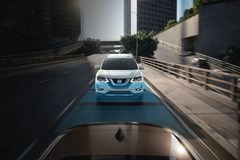