As the life’s work of philanthropist and collector Stan Reynolds, the Reynolds-Alberta Museum is one of the finest collections of automobiles and aircraft in Canada. It includes the oldest known production Chevrolet in existence, a century-old Hupp-Yates electric car in original condition, and a 1929 Duesenberg Phaeton Royale Model J worth something like $15-million.

However, easily the craziest artifact in the whole museum is an unassuming-looking white Citroën, which you will find sitting demurely beside a full-scale cutaway of a grain elevator, and across the way from a 18-tonne steam-powered traction engine the size of a brontosaurus. The Citroën, a 1934 P17 half-track dubbed “The Painted Lady,” does not hulk like a saurian threshing machine, nor does it exude the glamour of a Duesenberg or McLaughlin-Buick. It looks like a Model T had an affair with a tank.

Even so, this machine is part of one of the most cuckoo-bananas stories in Canadian motoring history. It is one of the two last remaining survivors of the Bedaux Subarctic Expedition, which comprised a French millionaire, his wife, his mistress (an Italian countess who brought her own maid), two geographers, a film crew, the Hollywood cinematographer of High Noon, around fifty Albertan cowboys, five of these half-track vehicles, 150 pack horses carrying gasoline, Devonshire clotted cream, caviar, Champagne and formal wear for attending balls. One horse carried only ladies' boots.

The expedition’s intent was to cross 2,400 kilometres from Edmonton through the uncharted Rockies, ending up in Telegraph Creek, B.C. Spoiler alert: They didn’t quite make it.

You can’t really fault Charles Eugène Bedaux for his ambitious aims. Born in 1886 in Paris to a railway engineer and a seamstress, he dropped out of formal education in his teenage years, and became involved with an unsavoury character named Henri Ledoux. Ledoux was a pimp in the notorious Montmartre district of Paris, a den of brothels and intrigue. When Ledoux managed to get himself shot and killed, Bedaux legged it for New York.

Slightly built and about 5½-feet tall, Bedaux was nonetheless charismatic. He arrived in the United States at the age of 19, worked a series of low-paying jobs, then was hired on at a chemical factory. There, he had his breakthrough: the Bedaux system. Essentially a refinement of existing ideas about increasing worker efficiency, Bedaux’s ideas and charm were like catnip to the rising tycoon class. His consultancy firm opened offices throughout the world.

By 1920, Bedaux’s second wife, Fern Lombard, had brought him into high society. He was soon hanging out with the likes of Ernest Hemingway and Babe Ruth, and cutting a swathe through the nightclubs and speakeasies of New York.

Rich, adventurous, amorous, and with a voracious appetite for the finer things, Bedaux decided that adventure travel was an essential part of a well-lived life. Excursions to Africa and Tibet followed, and he took further inspiration from the expeditions of André Citroën, founder of the eponymous car company.

Citroën had successfully employed the Kégresse system in crossing the Sahara and large parts of Asia. The innovation was a flexible belt-track invention perfected by French engineer Alphonse Kégresse, who worked on the Russian Tsar’s motor pool, modifying Rolls-Royces and Packards to half-track specification. Later, Joseph-Armand Bombardier would use a similar technique to propel his snow machines.

Bedaux and Citroën were friends, so acquiring five of these new half-tracks (in French: autochenilles) was relatively simple. Each P17 weighed a relatively light 1950 kilograms and was equipped with a three-speed manual and a two-speed auxiliary gearbox for crawling. Even so, the four-cylinder engine only made 12 horsepower, and top speed was a plodding 18 km an hour.

Still, could be worse. As any seasoned off-roader will tell you, it's not the speed of your progress, it's the ability to keep going when others get stuck.

Buoyed by an optimism typical of the industrial age, and equipped with the best machinery and equipment available, Bedaux and company set off in a golden cloud of hubris. He arrived in Jasper, Alta., in June of 1934 with his entourage for a rigorous training schedule, by which he meant attending a lot of parties.

The curious thing is that Bedaux wasn’t some Champagne-soaked idiot, but a relatively experienced woodsman. He’d been to the northeast and northwest of British Columbia no fewer than five times between 1926 and 1933, hunting and exploring. He really should have known better.

But perhaps it was simply that the summer was rainier than expected, or that the Citroëns weren’t up to the task, or that the Canadian wilderness can be merciless. The expedition headed out on July 22, 1934, and less than 24 hours later, Bedaux found his lead Citroën lodged in the muddy bottom of a creek. Then the muskeg came and progress slowed below crawling speed – scarcely five km a day.

Realizing that half-tracks were no match for the terrain, Bedaux went to Plan B: publicity. Mind you, the presence of cameras, film crew and a Hollywood director should indicate that chasing fame was always part of the Bedaux expedition’s intent. In fact, when initial forays showed that the company had overpacked, the first luggage sent home was scientific equipment belonging to the two somewhat-chagrined geographers.

Bedaux had two of his Citroëns pushed off a cliff while the cameras rolled. Then he put another aboard a raft and attempted to blow up a cliff face as it floated past, but the dynamite fizzled out, as with so much in this expedition. The final two were abandoned at the aptly named Halfway River. Somehow, these last survived.

Sans autochenilles, the team continued on horseback, but eventually gave up some 300 km short of their original goal as October snows began to fall. The entire fiasco had cost Bedaux a staggering $250,000 in 1934 dollars. He didn’t seem that bothered, and indeed the return of the defeated expedition was greeted with a massive celebratory banquet.

The party wouldn’t last. Bedaux’s final decades were marred by his cozying up to the rising fascist powers in Germany. Among other things, he hosted the marriage of Edward VIII and Wallis Simpson after the former King abdicated the British throne, and then arranged for the couple to meet Adolf Hitler on their honeymoon. Good grief. Some people would just gift-wrap a toaster.

The Bedaux story ends, sadly, by suicide in a Miami hotel room in 1944, while under investigation of treason by the FBI. Multiple conspiracy theories abound, casting him as either pawn or mastermind. The footage shot by Floyd Crosby, the High Noon cinematographer, was recovered in the mid-1980s, and made into a documentary called The Champagne Safari.

At the time when Bedaux was coming to the end of his scarcely believable life, young pilot Stan Reynolds was stationed in Britain with the RCAF, taking to the skies as a night-fighter pilot. When he returned to civilian life, settling just south of Edmonton, he kept flying.

Stan's sharp eyes served him well, as he would spot some old car or piece of machinery on a farm, and then swoop down to land in a field and chat to the farmer. If he could strike a deal, a truck would be dispatched. Between these excursions and the car dealerships he founded, Reynolds amassed a collection in the thousands, not to mention his aircraft collection, the second-largest in Canada. For his service and generosity in preserving prairie history, he was appointed to the order of Canada in 1999.

Along with its vast collection and archives, the museum hosts events and rotating collections including, most recently, a huge array of McLaughlin-Buicks, the Canadian-made car most beloved by the Royal Family. It's a vast place, with an entire hangar's worth of cars still undergoing restoration.

And, should you visit, stop a while by the little white Citroën half-track and pay your respects. Charles Bedaux was a rogue, a scoundrel, and perhaps even something of a traitor. Say what you like: the man knew how to travel in style. 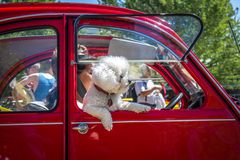