Anyone who has ever been on a dark country road at night has probably experienced it at one time or another – that momentary dazzling blindness caused by an oncoming driver who has failed to turn their high beams off while passing. It’s annoying at the best of times and downright dangerous otherwise.

Many of us have also been on the opposite side, where we have forgotten to shift our lights down. It’s a very un-Canadian, un-polite thing to do.

That’s where automatic high beams come in. An option in luxury cars for more than a decade, the feature is starting to go mainstream by filtering into all manner of models, including on the low end.

The goal is to make driving in the darkness safer by taking the work of controlling high beams out of drivers’ hands.

Automatic high beams do exactly as advertised – they’re forward-oriented lights that turn brighter and dimmer automatically, depending on the other vehicles and available light on the road.

Car manufacturers tout this automatic function as being equal if not superior to manual control.

“It does it for you and it’s very quick to respond,” says Chris Tubbe, an engineer and regulatory affairs manager at Toyota Canada. “There’s never been a situation where I’ve been driving and thought it was too slow.”

Automatic high-beam systems depend on a forward-looking camera mounted in the rearview mirror. The camera detects various forms of lights – including headlights, tail lights and ambient light from cities. The system then crunches that information to determine when to have the high beams on.

Rather than flicking them on and off manually, the driver can opt to put their high beams on automatic by pushing a button on their dashboard or steering wheel, at which point the system takes over.

If the camera sees headlights approaching or tail lights getting closer, it shuts the high beams down. The beams flick on again on their own once those lights are gone.

“They were either not using them at all where they could benefit from high beams or they were using them and not properly switching them off when oncoming traffic was coming.”

Range varies between automakers. Toyota’s system, for example, detects headlights at 400 metres and tail lights at 100 metres. BMW’s, meanwhile, has a range of about a kilometre.

Availability also varies, although automatic high beams are now more prevalent than just a few years ago. The feature is available in every vehicle with Toyota Safety Sense, which is nearly all of them, and across BMW’s line, for example.

The main purpose behind the function is to eliminate the work and stress, as minor as they may be, of manually turning high beams on and off. “It gets tiring after a while,” Tubbe says.

Drivers who stick primarily to cities aren’t likely to get much use out of the feature – or high beams in general, for that matter – which means they’re intended more for rural settings where there are fewer cars and street lights.

“You’re not going to get it activated as much because you have a lot of lights from the city and road lighting where the system won’t turn on,” Tubbe says. “In a rural environment, this is something people are going to use on a regular basis for sure.”

As for high beams in general, their purpose is a no-brainer: more light in dark environments means more reaction time for drivers, which equates to safer roads – provided that they’re not blinding others.

There are no regulations or requirements covering this particular feature, but most jurisdictions have general rules regarding high beam usage. In Ontario, for example, the Highway Traffic Act prohibits drivers from using them within 150 metres of oncoming cars or 60 metres when following.

Automatic systems tend to turn on and off well before those thresholds are met.

A number of automakers are working on better lights in general, which they say will benefit automatic high-beam systems as well.

Mazda, for example, has introduced adaptive LED headlights in Japan that split their beams into four controllable blocks. The company, which currently offers automatic high beams across most of its Canadian models, hopes to make those advanced lights available here soon.

“Instead of shutting off the high beams across the entire angle of the vehicle, it’ll just block that area that’s going to shine into the eyes of oncoming traffic,” says Rob Murdoch, national manager of technical Services for Mazda Canada. “It’s amazing what they’re able to do.”

Will parking-assist technology make more drivers back their vehicles into spaces?
August 14, 2018 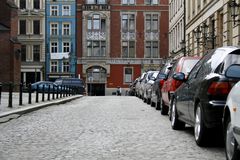 How does my car’s lane-keep assist technology work?
August 2, 2018 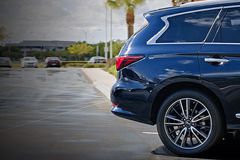