Mike Hall, star of the History Channel show Rust Valley Restorers, has a physical presence reminiscent of Hulk Hogan’s and a soft heart for the abandoned wreck of a car.

The Rasta Blasta, as Hall is known in Tappen, B.C., for both his dreads and his day job dynamiting rocks to stabilize slopes and rock faces – “dopes on ropes,” he quips – began hoarding cars in his teens. He hasn’t stopped. More than 400 of them rest in pieces in his five acres adjacent to the Trans-Canada Highway.

He has towed them home from farmer’s fields and backwoods, wherever his travels with his Chimera Springs Rock Works have taken him. They’re non-runners for the most part, but Hall sees something special in each and every one.

One day he got to thinking: If he were to restore even 10 cars a year, he’d need to live to 102. “I’ll be 62 soon, my dad died at 60,” he says. “I’ve seen buddies dying or running into health problems, leaving their families with all kinds of stuff to deal with. What are my wife and kids going to do with 400 cars in a field?”

So the Rasta Blasta tried offering both cars and property for $1.19-million in 2016. No takers. Yet by raising the price to $1.45-million in 2017, he opened another door. The story went viral, and Hall found himself fielding calls from collectors as far away as Finland and from video producers who proposed documentaries on the wild man with a soft spot for car cadavers.

Tyson Hepburn and Matt Shewchuk, of Vancouver-based Mayhem Entertainment, knew Hall from a guest appearance he’d made on Highway Thru Hell, a Discovery Canada show Shewchuk directed. In it, the Rasta Blasta was called in to blow up rogue boulders.

Hepburn’s pitch video earned backing from Corus Entertainment for the eight-part series featuring Hall and celebrating the car culture of the Shuswap communities east of Kamloops, dubbed Rust Valley in the show (it resumes Jan 17, 10 p.m.). The White Post Auto Museum and Antiques Mall is just along the Trans-Canada from Hall’s shop. Canadian Hot Rods Inc., also is in Tappen, while Vern’s Custom Auto operates in Salmon Arm.

The series premise has Hall’s new business, Rust Bros Restorations, working magic on wrecks selected from his acreage and on cars owned by area enthusiasts. But will the business survive Hall’s dubious decisions?

In the series premiere, in December, Hall fancied painting a Dodge Swinger pink; agreed to restore a 1966 Lincoln Continental for $15,000, hugely underestimating the labour involved; and sold his gorgeous Chevelle SS 396 at a swap meet for $10,000 and some engines and transmissions, after hoping for $25,000.

The $10,000 will allow him to meet payrolls, he intimates on camera, with the restoration business just under way and no money coming in. “This shop just about killed me,” he says, putting its cost at somewhere between $200,00 and $300,000.

His son, Connor Hall, plays stern comptroller. “My dad has put us in a bind,” he says of the projected six to eight weeks to complete the Continental. He’s disdainful of dad paying $2,000 for a metal-forming brake when cash is short, then bullies dad into selling parts at a swap meet for some positive cash flow. All this, in the first episode.

Avery Shoaf is Hall’s business partner, sidekick, foil. “I call Avery the Muscle Car Moron but he’s unreal working on a car,” Hall says. “A 1941 [Dodge] Power Wagon later in the series, he puts together in a week.”

Each episode was to feature one car selected from Hall’s wrecks, another a client’s. Because some took longer than projected, the series covers 14 restorations.

Whether Corus determines Rust Valley Restorers will continue into a second season, whether a buyer comes out of nowhere with $1.45 million for the cars and acreage, whatever turn the road should take, Hall’s connections with his personal favorites will not be broken.

A non-car-person might reasonably wonder why. “Some of my cars I may never restore, but being able to look at them means something.”

He has five Sunbeam Alpines, none running. He remembers Maxwell Smart driving a Sunbeam Tiger in the Get Smart television series he watched as a kid. If there’s more to that reflection and the thought of breathing new life into an Alpine as a Tiger, Hall isn’t telling.

“It’s memories. I watch old fellows when they walk through my cars, they’ll stop and stare. You know they’ve had a thought, something from their past.”

Most of Hall’s cars are American. “You open the hood and see eight wires [for a V-8’s sparkplugs] and you’re back in control, you know you can work on that motor.”

The higher the tech, the lower his interest.

At Pebble Beach, the Little Race Car That Could has its day in the sun
August 28, 2018 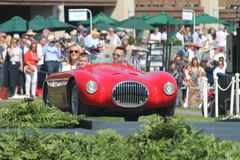 How the Citroën played a starring role in one of the most absurd stories in Canadian motoring history
August 20, 2018 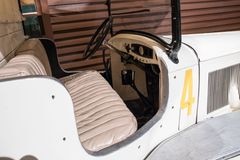 At the All-British Field Meet, backstory gives a boost to restored vehicles
May 22, 2018 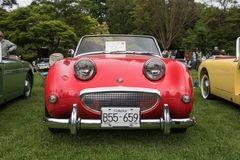