I hope you can settle a minor family debate. While stopped in the curb lane at a red light, can you turn right into the rightmost (curb) lane of the other road if that lane is designated as a turning lane to enter into an establishment, like a shopping centre? The turn lane is very long which would allow your vehicle to turn into it and then merge left to the regular traffic lane. I’m of the opinion that if you make a right turn on a red, you always turn into the lane closest to the right curb and then merge. My son, who received his BA with a minor in law, disagrees with me. Who’s right? — Lyne, Ottawa

When you’re making a right turn, you’re right to turn into the rightmost lane – even if it’s ending up ahead.

“The law does require that you turn into the rightmost lane,” Const. Chuck Benoit, Ottawa police spokesman, said in an e-mail. “When it’s safe to do so, change lanes.”

Section 141 of Ontario’s Highway Traffic Act (HTA) says a driver turning right must turn into “the right-hand lane of the intersecting highway where the lane is marked or, where no such lane is marked, by keeping immediately to the left of the right curb or edge of the roadway being entered.”

In other words, stay in your lane – and if there isn’t one, keep to the right.

And if you’re turning left, you have to turn into the lane closest to the left side. If there’s more than one turning lane, you stay in the lane you’re in.

But the law doesn’t specify what to do if that rightmost lane is ending, or if the lane is open but there are parked cars half a block ahead.

That generally means you have to turn into that rightmost lane anyway, police said.

“The fact that vehicles park close to the intersection or the lane ends does not allow the driver to not follow the rules,” Const. Clint Stibbe, with Toronto police traffic services, said in an e-mail.

If the rightmost lane is ending or takes you into the Costco parking lot, turn into it – unless there’s a sign saying not to – and then switch lanes.

“The lane markings will indicate that you are permitted to make the lane change,” Stibbe said.

“That would give an individual enough time and space to pull into the proper lane and then make a lane change when safe,” Stibbe says.

We also checked with police in Vancouver, Calgary and Montreal. The rules there are all similar to Ontario’s.

“The safest thing is to be predictable – drivers expect turning vehicles to complete their turns into the right lane in this scenario,” said Const. Jason Doucette, Vancouver police spokesman. “If that lane ends up ahead, make a lane change once you’ve completed the turn and it’s safe to do so.”

If the parked car is so close to the intersection that you can’t turn safely – Page 61 of Alberta’s driver’s manual has a diagram – you can turn into the lane to the left of it, as long as you yield to traffic in that lane, Babott said.

Car collisions with wildlife are getting worse in Ontario
July 1, 2018 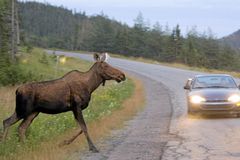 Is premium gasoline worth the price difference?
June 24, 2018 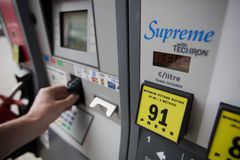 Do demerits received in Quebec count in another province?
June 3, 2018 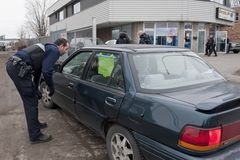