I don’t really understand how people can still leave their kids in hot cars. Why aren’t people getting the message? – Pete, Montreal

In most cases where a child died in a hot car, parents didn’t realize they were in there. And they never think it could happen to them.

“We know awareness isn’t working because these deaths aren’t going down,” said Amber Rollins, director and volunteer manager for Kids and Cars, a U.S.-based advocacy group. “The majority of people believe they would never do this so they don’t take precautions.”

How should bystanders react when children are left in a hot car?

On average, 37 kids die in hot cars every year in the United States – 88 per cent are under three years old, Rollins said. In Canada, the numbers are not tracked.

“The number has remained steady since these tragedies began happening in the late 1990s,” Rollins said.

That rise came along with requirements for rear-facing car seats and recommendations to keep children out of the front seat.

It’s safer for kids in the back seat, Rollins said. But with rear-facing seats, you can’t see from the front that they’re occupied.

Who could forget a child in the car?

“In almost every case, it’s parents of young children and they probably aren’t getting a lot of sleep,” Rollins said. “When you’re fatigued, your basal ganglia takes over – it’s that part of your brain that takes you from work to home without thinking where you’re going.”

In the Montreal case, the boy’s father went to pick him up at the daycare and discovered that he hadn’t actually dropped him off in the morning. It was 25 C outside that day.

“I’ve known parents who have taken the car out to lunch and driven back to work without realizing their baby was dead in the back seat,” Rollins said. “Typically, there’s been some change in their daily routine.”

Kids have also died when they’ve climbed into unlocked cars on hot days. While the kids who die have typically been in hot cars for hours, kids can start to suffer heatstroke in just minutes.

“Under four years of age, their skin is thinner and they heat up faster,” said Liane Fransblow, trauma co-ordinator at Montreal Children’s Hospital. “Even at 20 degrees [outside], if your kid is in the car without air conditioning for 10 minutes, they’ll start to have some respiratory problems.”

Could technology save lives?

This month, a Quebec coroner recommended mandatory alert systems in all vehicles to warn drivers if there is a child in the back seat.

While there’s a bill before the U.S. Senate that would require a visual and auditory alert of back-seat passengers, Canada has no similar law or policy in the works, Transport Canada said.

Transport Canada said it has reviewed current sensor technology available to manufacturers and “no sensors were effective enough in detecting infants left in a vehicle.”

“Infants can have erratic breathing and heartbeats and they produce only small amounts of carbon dioxide – which all pose significant challenges in detecting their presence,” said Pierre Manoni, Transport Canada spokesman, in an e-mail.

But Rollins said there is “new and emerging technology every day – there is no way that they have studied all of it.”

There are aftermarket systems, apps and child seats with sensors to remind parents of kids in cars.

“We firmly believe that no parent or caretaker thinks such a tragedy could happen to them and therefore, they’re unlikely to buy an aftermarket product to deal with that situation,” Consumer Reports said.

Right now, GM (in the 2017 and 2018 Acadia) and Nissan (in the 2018 Pathfinder) have systems that warn a driver to check the back seat if the back doors were opened within 10 minutes before the car was started.

Neither system senses kids. And GM’s system is deactivated if you stop along the way and don’t reopen the back door, Rollins said. In the fall, Hyundai announced a sensor that will detect movement in the back seat of a locked car, although it hasn’t announced which forthcoming models will have the feature.

But, technology could give parents a “false sense of security,” said Pamela Fuselli, vice-president of knowledge transfer for injury-prevention charity Parachute.

“What if it malfunctions or, like all those car alarms always going off, we get so used to false alarms that we just ignore it?” Fuselli said. “There are low-tech things you can do, like always leaving your cellphone or purse in the back seat, to get you in the habit of checking back there automatically before you leave your car.”

We have the technology to prevent hot car deaths. Let’s embrace it
July 6, 2018 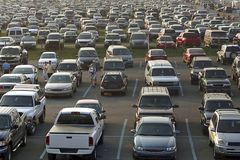 Police charge father of Ontario boy who died after being left in hot car
May 30, 2018
Toronto woman charged after four-year-old boy dies in hot car
September 22, 2017
Follow us on Twitter @globedrive Opens in a new window
Report an error Editorial code of conduct
Due to technical reasons, we have temporarily removed commenting from our articles. We hope to have this fixed soon. Thank you for your patience. If you are looking to give feedback on our new site, please send it along to feedback@globeandmail.com. If you want to write a letter to the editor, please forward to letters@globeandmail.com.
Comments