Tokyo is perhaps the most exciting city on the planet. More than 40 million people cluster in the metropolis and its suburbs, putting it at the top of the list for the most populous cities on Earth. An extensive and meticulously organized public transit system means thereʼs no need to rent a car to get around, but donʼt dismiss the thought. There are parts of this place you can only see from the driverʼs seat.

Owning a car in Tokyo is inconvenient and expensive. The traffic is absolutely brutal during rush hour, and a parking spot can cost as much per month as renting an apartment. Plenty of Tokyo residents do without, and yet the city has perhaps the most varied and vibrant car culture on the planet.

If youʼve just landed at Narita International Airport, you may be tempted to hop on the express train headed to the city centre and go for a wander beneath the neon lights. Perhaps youʼre considering popping over to the Akihabara area, famed for its dozens of electronics retailers. If you do, and happen to get a great deal on a new lens for your high-end digital camera, head back to the rental counter and grab a set of keys for a day or two. Pay the extra fee for the ETC electronic toll collection card. Then go hunt some supercars, keeping in mind these five rules.

1. Never pass up a parking area

If you drive anywhere in Tokyo, whether itʼs to the busy Shibuya pedestrian crossing or the quirky Studio Ghibli Museum, youʼll probably find your GPS directing you along one of the cityʼs ring roads. During busy mornings, these places become parking lots. On a weekend, they can hold hidden treasures.

Every major motorway in Japan is dotted with rest areas that are only accessible from the road. Some are just a single row of parking and a pair of washrooms, but many have cafés, shopping areas and at least one even has a Ferris wheel. Many a Tokyo resident will stop here to stretch their legs when out for a weekend blast.

On a Saturday morning, I swung in off the expressway and stumbled across a Porsche GT2 parked in the far end of the lot, near a cluster of heavy trucks. The owner, emerging from a café with a coffee in hand, didnʼt mind me taking a picture.

2. Have your camera ready

Sight-seeing in Tokyo generally involves feeling constantly overwhelmed. Japanese people are polite, bordering on shy, but the surroundings chirp, whistle and natter at you electronically, while huge displays flash high above your head.

What always ends up happening is that you turn your head and just catch a glimpse of something cool driving around a corner. Missed it. If youʼre at the wheel, tell your passenger to keep the lens cap off and their finger on the shutter button.

Would that I could show you pictures of all the cars I didnʼt get: a Morgan Aero, a pair of blue Nissan GT-Rs, a Bugatti Veyron or a white Ferrari 308. The bad news is, you canʼt catch them all. The good news is that thereʼll be something else interesting along in a minute.

Daikanyama bookstore, in Shibuya City, is a must-see for any gearhead visitor to Tokyo. The place is stacked floor to ceiling with rare books and magazines, many of them Japanese-language editions you canʼt get elsewhere. I found myself vacillating between an ownerʼs manual for a 1960s Mazda Cosmo, and a Miata-specific publication called Roadster Bros.

Out front, a Ferrari GTC4Lusso cruised past, fitted with consulate plates. This area is home to many of the international delegations to Japanʼs government, so you never know what youʼre going to see. Further, there is always a smattering of interesting cars parked out front.

And, one Sunday a month, the parking lot adjacent to the bookstore hosts a car show. You can check the Daikanyama T-site Facebook page and see whether your visit lines up with the show, as itʼs a must see.

If you have a single car-loving bone in your body, you will find a way to make it to the Daikoku Parking Area on a Sunday morning. Sitting on an island in Tokyo Bay to the south of the city, this concrete rest stop is located at the bottom of spiralling ramps that descend from the elevated highways.

Daikoku is worth a stop pretty much any time, but on Sunday mornings, itʼs a destination for nearly every Tokyo gearhead out there. Itʼs not exactly a car show, more an impromptu tradition.

Cars come and go in pairs and small groups, meaning that there are constantly new things to see. After a couple of hours with my jaw on the pavement, I turned to leave – and a Lancia Stratos pulled in.

One of the great things about Daikoku is that language doesnʼt seem to offer much of a barrier. Everybody here speaks car, and theyʼve brought their machine out to be appreciated. Youʼll make new friends.

5. Throw away the word impossible

Japan is a tightly structured society governed by rules. Having said that, a lot of those rules donʼt seem to apply to cars. People constantly just throw on the hazard lights and park on the curb. Racing cars show up wearing licence plates. Often you see cars you canʼt possibly identify. A Manta Ray? Whatʼs that?

Just go with it. Tokyo is a city where nearly anything is possible. Itʼs a place where supercar dreams come to life.

Get behind the wheel of a McLaren and hold onto your stomach
May 16, 2019 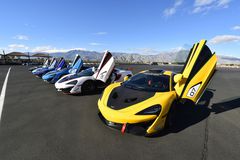 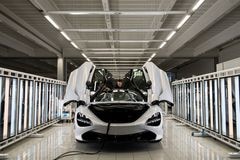 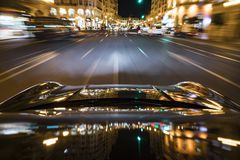