John McMeans and his wife Lisa were looking forward to a cycling trip in Cape Breton this summer, but then the COVID-19 pandemic hit. Like so many Canadians, they were forced to cancel their plans.

Now, as the country slowly returns to something resembling normal, the Toronto couple has a new itinerary – a July trip through Ontario, along the north shore of Lake Superior, in a rented recreational vehicle.

After months of being forced to stay indoors with little to do, they’re finding themselves more excited about this closer-to-home contingency trip than their original vacation.

“I’ve never put my feet in Lake Superior, so the idea that I’m going to be able to do that is super cool,” says Mr. McMeans, who works for a bank. His wife is a teacher. “It wouldn’t have been first on our list and I don’t know why, now that I’m doing the research. There are amazing activities to be doing up there.”

The McMeanses are far from alone in discovering a newfound appeal for local travel. They are among a wave of Canadians who are expected to try RVing for the first time this year.

With restrictions on flights and border crossings – even between some provinces – as well as health concerns and physical distancing measures continuing to make traditional travel difficult, if not impossible, many vacationers are expected to stick within driving range of home.

RVing also saves travellers from having to figure out which hotels are open, suitably sterilized and safe to stay in. Many vehicles also provide some self-sufficiency with built-in bathrooms and kitchens, which fits well with distancing and safety requirements.

RV sales have been booming for years in North America, largely driven by a combination of lighter and less-expensive options on the market, and increasing popularity among younger buyers. Some 483,000 units worth US$20-billion were sold in 2018, up from 285,000 worth US$10-billion in 2012, according to the Recreational Vehicle Industry Association.

That momentum was halted as the pandemic largely shut down production – just 7,197 RVs were shipped in April, compared with more than 40,000 in the same month a year earlier, the RVIA said.

But a fast rebound is expected. Experts say dealerships are rapidly shrinking the big discounts they typically offer on suggested retail prices, a sure sign that the boom has already resumed.

“Most of the dealers I’ve spoken to are saying that business is going gangbusters,” says Eric Lawrence, principal speciality vehicles analyst at tracking firm Black Book. “People come in, see the price and they buy it, they don’t negotiate. When there’s a swell in demand, you don’t have to negotiate.”

Airbnb-like online services that connect RV owners directly to renters also say demand is skyrocketing. Outdoorsy, founded in North Vancouver in 2015 before relocating to Austin, Tex., says it is seeing a booking a minute in the United States, with similar interest in Canada.

The growth means dramatically more big vehicles on roads and highways, which is resulting in commensurately large, congestion-creating accidents. New owners or renters who aren’t used to driving or towing such vehicles, combined with their light-weight construction, are often the culprits.

“When they crash or wreck, there isn’t a lot of integrity to them,” says Kerry Schmidt, a sergeant with the highway-safety division of the Ontario Provincial Police. “It can be messy when we have a loaded trailer go down on the highway.”

Public campgrounds are also showing signs of buckling under the demand. The B.C. Parks website, for example, crashed when it opened for bookings in late May. Spots across the country can be tough to come by.

Tour operators suggest this may be temporary. Jason Lehoux, who operates Montreal-based road-trip booking service Authentik, says many companies have yet to cancel international bookings made for July and August. They will likely have no choice but to do so, which will free up many spots.

Kampgrounds of America, which oversees 33 private campgrounds in Canada and nearly 500 in the United States, has also expressed confidence it can meet growing demand because its operators have been steadily ramping up RV capacity for years, as have competitors.

“I’m confident saying that across the board,” says KOA chief executive Toby O’Rourke. “They’ve had so many years of good business that people have been reinvesting in their parks.”

Some small towns, including a number in Ontario, have asked tourists to stay away for fear of having their limited medical facilities overrun by a possible outbreak. Outdoorsy co-founder Jen Young says it’s incumbent on travellers to do their research and respect such wishes.

“If the towns are saying don’t come, then you probably shouldn’t go,” she says.

On the flip side, however, some towns can’t wait for tourists to return. Jasper, in Alberta, for example, saw unemployment as high as 70 per cent prior to the national park’s reopening on June 1.

Travel operators point out that Canada’s outdoor tourism infrastructure is unlikely to be overrun by RVers and other road trippers on the whole, mainly because a surge in local travel won’t offset the near total loss of international visits.

Steve Badger, chief executive of Kelowna-based RV rental service Adventure Touring, says bookings from locals have been doubling each week, but he’ll consider himself lucky if they end up equalling what he’d normally see from foreign travellers.

“They’ll fall short this year, for sure,” he says.

Government figures suggest a similar outcome. Canadians typically spend $36-billion a year abroad, according to Destination Canada, while tourists visiting here spend around $22-billion annually. Canadians would need to increase domestic travel and related spending by 60 per cent to match the loss – a tall order according to tour operators.

Mr. Lehoux, of Authentik, said he expects to book only about 20 per cent of his normal annual volume this year. That’s bad news for him, but he says it’s a positive for Canadians because many normally busy destinations – such as national parks – will be largely free of packed tour buses.

“They won’t be there this summer,” he says. “It’s a once-in-a-lifetime opportunity for Canadians to discover their country.”

Editor’s note: A previous version of this article listed the wrong number of RV units sold in North America in 2018 and 2012. The Globe regrets the error. 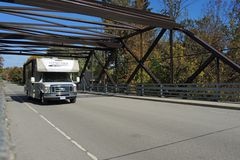 Why young people are driving an RV revolution
August 26, 2019 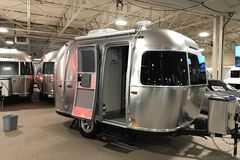