How many pet safety harnesses currently on the market will actually protect your beloved companions in the event of an automobile accident?

Not many, according to pet-safety advocate Lindsey Wolko, the founder of the Center for Pet Safety (CPS), a non-profit consumer advocacy organization based in Reston, Va. The agency is the only one of its kind in the United States, and there’s no equivalent agency in Canada. The CPS tests pet harnesses, crates and carriers to improve safety for pets and the human occupants of vehicles.

In Canada and the United States, the pet-products industry is unregulated, with no specific rules around pet safety-restraint products. The lack of oversight has led some companies to make misleading claims about the performance of their products, Wolko says.

“Manufacturers can … make all sorts of safety claims about it, spin the marketing content and not be held accountable for any injuries or deaths that occur,” she says, warning that the onus is on the consumer to do their homework.

Wolko says some companies will claim their products are crash tested, posting high-quality videos online showing products passing rigorous tests. But those tests are conducted without any formal oversight, Wolko says, and some companies will even go so far as to “value-engineer” their product afterwards. In other words, they will use a higher-quality version of the product during their crash tests but use lesser-quality materials for the product that’s sold to the public.

Wolko points to a CPS study conducted in 2011 in which the organization examined 17 dog safety harnesses from various brands and then crash-tested the top four, which had made very specific safety claims. None of the harnesses passed the CPS-sponsored crash tests. In fact, the tests found that there was a high probability of the pet choking or suffering bodily harm and also found there could be a danger to humans if the harness failed and the dog became a flying projectile.

Very little has changed since then, she says. While the CPS has tested hundreds of brands of harnesses over the years, they’ve deemed just three as crash-test certified: Sleepypod Clickit Sport, Sleepypod Clickit Terrain and ZuGoPet The Rocketeer Pack. All three are available in Canada.

These harnesses have been shown to have tethers that don’t break and high-quality metal buckles and adjusters that don’t come loose during a crash. Hardware quality is key to a good harness – if the adjustments or buckles are weak or thin, it’s easy for them to slide and open.

“I can’t speak to the standards that the Center for Pet Safety has in comparison to ours,” says Keith Anderson, associate director of brand for Kurgo Dog Gear, a maker of pet restraints, barriers and dog seats based in Knoxville, Tenn.

Kurgo harnesses are crash-tested using a similar scientific methodology to child-safety seat tests. But Anderson agrees there’s “no consistency, no uniformity” when manufacturers are setting their own standards. That’s why the U.S. Pet Products Standards Council launched four years ago. It’s a non-profit group managed by the pet-products industry, including Kurgo and PetSafe. The group spearheaded an initiative to set a single standard for pet-safety crash tests using identical criteria, such as the same-weight dummy dogs at the same facility. The aim is to have the industry-wide standard adopted within the next two years, but the crash tests would still be self-monitored by the pet-products industry. CPS is the only organization that is completely independent of the industry.

There is little data collected by the U.S. National Highway Traffic Safety Administration, Transport Canada or individual police departments on people being injured by pets during crashes.

However, a 2011 survey by the American Automobile Association (AAA) and Kurgo found that 65 per cent of drivers admitted to petting their dog, snapping pictures of them or otherwise being distracted by their pets while driving. It also found that in a crash, a 10-pound (4.5-kilogram) unrestrained dog can generate 500 pounds (225 kg) of force in a crash at 50 miles an hour (80 km/h). Big dogs generate far more force at even lower speeds.

“I’ve seen the outcomes of pets in accidents,” says Sergeant Kerry Schmidt of the Ontario Provincial Police Highway Safety Division. “Many pets die in crashes. … Distracted driving isn’t always a cellphone – you can be distracted by kids or pets in the car,” he adds.

Depending on where you live in Canada, the rules vary on having unrestrained pets in the vehicle. In Ontario, there’s no law requiring pets to be restrained, but if a pet is crowding the driver’s seat, the driver can be fined under the Ontario Highway Traffic Safety Act for careless driving, which carries a $110 fine and three demerit points. In Calgary, under distracted-driving laws, drivers could face a $300 fine and three demerit points for having a dog in the front seat. Similarly, under Quebec’s Highway Safety Code, drivers can be fined $100 with no demerit points if a pet obstructs their field of vision. Tickets can also be issued under B.C.’s Motor Vehicle Act for pets that aren’t tethered in the back of pickup trucks or are sitting on the driver’s lap, a fine that carries a $109 penalty.

At the very least, harnesses prevent pets from getting into the front seat and distracting the driver, says Darren Grandel, director of animal-protection services at the Ontario SPCA and Humane Society. Still, he says more could be done to better protect the human and animal occupants of vehicles. The harnesses are assumed to work much like human seatbelts, Grandel says, but “I don’t think they’re quite there yet.”

One small thing all pet owners can do, Grandel says, is to keep your pet restrained in the back seat – never let them ride shotgun. It can be deadly to a pet if an airbag goes off in an accident, he says. 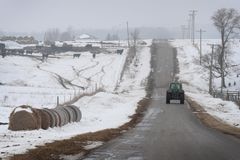 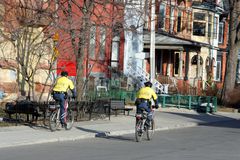 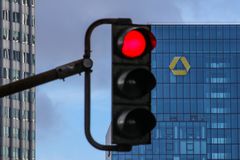