For car-sharing companies, it’s not that easy being green.

Car-sharing and caring for the Earth seem like a natural fit. But companies say battery-electric vehicles (BEVs) don’t really make sense in a shared fleet. And, users say they want them – but they don’t actually take them out as much as gas cars.

“[Our members] tell us that they [want more EVs], but their actions, in terms of bookings, say otherwise,” said Selena McLachlan, spokeswoman for Modo, a Vancouver-based car-sharing co-op, in an e-mail. “They fear they will run out of fuel, or not find a charger, or won’t know how to use the charger, or don’t want to charge the vehicle during their booking.”

How many EVs do car sharers have? It varies. Modo has 155 hybrids in its more-than-700-vehicle fleet. But, it has just one battery-electric vehicle (BEV) and one plug-in hybrid – with plans to add six more BEVs this year.

Communauto, which runs in 13 Canadian cities and in Paris, the French capital, has about 100 BEVs and about 900 hybrids.

And, car2go, which just joined with BMW’s Drive Now to become Share Now, has 20 BEVs in Montreal, its only city in North America with electric cars.

While Share Now says it will have 4,000 BEVs in Europe (about 800 more than it has now) by the end of this year, there are no plans to increase the number of EVs here.

“Currently, no North American city in which we operate has the necessary infrastructure to support a large fleet of shared electric vehicles,” said Tim Krebs, Share Now spokesman, in an e-mail. “Europe is much farther down the road in this regard.”

Why? For one thing, Europe has more fast chargers, which charge a car to 80 per cent of its charge in 30 minutes, instead of hours.

“For car-share, you need multiple fast charging points per square kilometre,” Krebs said. “The charge points must be available 24/7 and not in a garage that closes at night.”

Remember how people renting VHS tapes didn’t always rewind them for the next person? A car that’s sitting charging – or waiting to charge but can’t because somebody has parked in a charging spot – is a car that can’t be rented out.

“[BEVs are] not economically viable,” said Marco Viviani, vice-president of strategic development with Communauto. “The cost of the cars is still too high and, even if we have lower maintenance costs, the spare parts are very expensive.”

Sure, as the BEV range gets better, more fast chargers are added and the cars get cheaper, they’ll make more sense for car-sharing.

Is a hydrogen-powered car the next big thing?

Hydrogen cars come with the benefits of BEVs – there are no emissions – but they fill up in under five minutes like a gasoline car, have a 570-kilometre range and, unlike BEVs, don’t lose a big chunk of their range in winter temperatures.

For Hyundai, it’s a chance to expose more people to hydrogen. Modo’s two Nexos are among the first eight of the $73,000 vehicles delivered to Canada.

“So the biggest challenge we face isn’t the technology, it’s education,” said Don Romano, Hyundai Canada president and chief executive officer. “Once they understand it and experience it, people will find it far superior to [battery] electric vehicles, of which we produce many.”

What’s the hitch? The biggest is the lack of places to fill one up. Right now, there’s only one public hydrogen fuel station in British Columbia – in Vancouver, about nine kilometres from downtown.

“We will have a positive confirmation from our members that they understand the [range] limitations,” said Patrick Nangle, Modo CEO. “We don’t want people to drive 400 km that way and not be able to come back. But that range will suit 99 per cent of our users, who don’t take vehicles out further than 100 km.”

There are plans for six more stations around Vancouver and on Vancouver Island by next year. And, nationally, there’s a station in Quebec with plans for more in Montreal and Mississauga.

And do users want them? In the first two days after the Nexos, which cost $6 or $10 an hour to rent, were introduced this month, 10 people booked them, McLachlan said.

“This was my first experience driving an electrically-powered vehicle,” said Modo member Kristi Fuoco, who got to try the Nexo before it was made available to all members. “It usually comes down to convenience and what’s available and closest at the moment, but if a Nexo ends up being in our neighbourhood, I would definitely consider taking it out …” 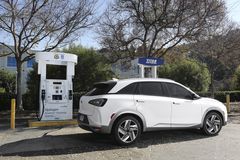 At long last, the Hydrogen Highway may soon be here
August 10, 2016 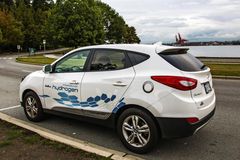 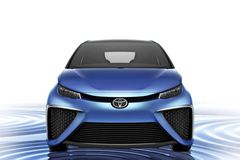