Not that long ago, green cars looked like, well, science experiments.

But the electric vehicles and concepts revealed at the L.A. auto show promise to match, and even beat, their gas rivals in looks – and in performance and practicality.

While every automaker is getting greener and they all have electrification strategies for the next five years, and beyond, most new EV announcements for the year have been made at previous auto shows. If anything, that move to making EV reveals at all major shows reflects how EVs are moving more into the mainstream.

While many of the reveals in L.A. were gas-powered, there were electric debuts, including two new electric concept cars, from Volkswagen and Hyundai, and new EVs from Ford and Toyota. Except for Volkswagen’s all-electric ID. Space Vizzion, they’re all SUVs – even the Mustang.

Volkswagen’s EV is technically a shooting brake: a four-door coupe with a hatchback.

“A lot of people look at it and say it’s a station wagon, but we see it as a combination of a wagon and a [crossover SUV],” says Thomas Tetzlaff, spokesperson for Volkswagen Canada.

The car is expected to have a 300-500 km in range, depending on which size battery you choose, and optional all-wheel drive. It’s expected to be in production by 2022.

It’s a contender – along with the ID. Vizzion sedan that was shown in L.A. last year – to be the second of Volkswagen’s ID. electric vehicles to come to Canada after the ID. Crozz SUV in 2021.

“We’ll look at which one people want,” Tetzlaff says.

Tetzlaff expects the Space Vizzion’s looks to change “very little” when it makes it to production.

Last Sunday night, Ford also started taking U.S. reservations for its Mustang Mach-E, an all-electric SUV that will go on sale at the end of next year.

“If you give electric cars more of what people have always loved – whether it’s performance or torque or capability – we think people will go nuts,” says Ted Cannis, Ford’s director of electrification. “This is our one all-electric for now, but we have plug-in hybrids like Aviator and Escape and Corsair and we have hybrids were bringing in like the F-150 and others.”

“The climate problem is a real problem, but not everyone is ready to move all the way in.”

Hyundai revealed its Vision T plug-in hybrid concept but didn’t give many details. The manufacturer talked mainly about its aggressive looks but not about range, powertrain, performance or when we might see it in production.

It has hidden DRLs which look a little futuristic – although the new Sonata has them too – but, despite sleek lines, it was recognizably a Hyundai SUV.

But the real news was the 2021 RAV4 Prime, the plug-in hybrid version of its top-selling SUV. With 302 horsepower, it’s the fastest and most powerful RAV4 ever, Toyota says.

“That is 83 more horsepower than the current RAV4 hybrid and it accelerates from [0-100 km/h] in just 5.4 seconds, making it the quickest alternative-powertrain vehicle we’ve ever produced and the second-quickest vehicle in today’s Toyota lineup behind only the Toyota Supra,” said Jack Hollis, CEO of Toyota North America.

It can drive up to 60 km on battery alone on a single charge, 25 km more than Mitsubishi’s Outlander PHEV.

It’s expected to arrive next summer, though pricing hasn’t been announced. Toyota’s already racing to keep up with demand for the hybrid RAV4. Expect the RAV4 Prime to be even more popular. 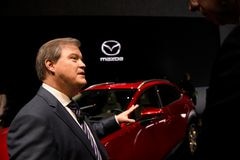 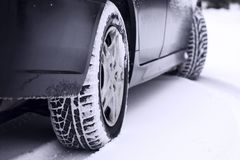 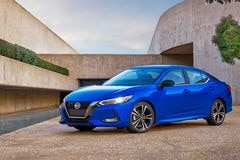