Drive north from the small town of Yale, in B.C.’s Fraser Canyon, and you will pass through seven tunnels before reaching Boston Bar. Each one is a masterpiece of 1950s engineering. And, in the right car, every one of them makes a hell of an amphitheatre.

Drop the windows, drop a gear and punch it. The speed limit here is relatively high, at 90 kilometres an hour, leaving just enough breathing room to slow, then roll into the throttle. In something such as a Shelby GT350, with its howling, flat-plane-crank V-8, the echoing sound will vibrate the plates of your skull.

Over the years, I’ve heard every song the internal combustion engine has to sing, and I have loved them all. I’ve stood trackside and applauded as a four-rotor Mazda 787B Le Mans racer screamed its banshee wail. I’ve driven a Ferrari Maranello Super GT racer with three-inch side-exit exhausts, the V-12 snapping and snarling at every prod of the throttle.

Sonorous Bavarian inline-sixes, thundering American V8s, grumbly Audi straight-fives, Honda four-cylinders that rev into the stratosphere or the thrumming of a flat-six engine: It’s all been wonderful. But maybe it’s only been wonderful for me. Maybe it’s time to turn down the volume.

Let me explain what I mean. A couple of weeks ago, I was driving a Jaguar F-Pace coupe. It’s a gorgeous car, one of the prettier modern designs out there. In the Fraser canyon, the raspy growl of its supercharged V-6 is just the sort of soundtrack to stir the emotions.

Unfortunately, at 7 o’clock in the morning, when that same exhaust comes awake with a roar in the driveway, the emotion stirred is one of intense embarrassment. The F-Type’s engineers have programmed the car to snap into the throttle when you press the starter button, which isn’t the sort of thing to impress your neighbours.

Starting the F-Type reminded me of my college years, when I purchased my first electric guitar. Eager to share my power-chord fumblings with the rest of the dorm, I cranked up the amp and kicked out the jams. My fellow students promptly almost kicked my door down.

Engine noise is great fun when you’re making it, or as a spectator at the race track, but much less so when you’re on the receiving end. Any number of examples spring to mind, from the flatulent cacophony of a Harley-Davidson ruining your summer afternoon nap, to the showoffs driving Lamborghinis around Monterey stuck in first gear.

Manufacturers are stuck in a bit of a bind. On one hand, people seem to appreciate exhaust noise in a car with sporting pretensions. It's part of the whole emotional experience of driving, the Promethean appeal of having controlled explosions at your beck and call.

Yet, on the other, maybe rock 'n’ roll really is just noise pollution. I’m not a college kid any more. I don’t think anyone should have to put up with this racket if they don’t want to.

Happily, there are a couple of solutions. Shortly after the Jaguar, I had a Hyundai Veloster N, which is possibly even louder. However, it's two-mode exhaust was whisper-silent in normal mode. Only when you put the car into its sportiest driving modes did you get the full bark and crackle from the back.

Even better would be something such as the Acura NSX’s stealth mode. Because the NSX is a hybrid, you can creep in or out of your neighbourhood on full electric power. If you’re the type of person who likes to get up early on a Sunday to find the best driving roads before they get crowded, it’s the ideal getaway machine.

And then there's the secret delight of pure electric vehicles, which no one ever seems to talk about. Yes, plugging in keeps your overall emissions low, and the instant availability of electric torque is addicting.

What’s really great about electric cars is that you can stomp the go-fast pedal on an onramp and make your getaway without anyone swivelling their head. Not long ago, I drove a Tesla-swapped VW bus around an industrial park in San Diego, and even though we were zipping along and having fun, nobody looked twice.

Electric-swapped classics are also not as completely silent on the inside as a modern production EV. You hear the buzz and hum of the motor and the whirr of the gears. Some electric motors even warble a little. It's like having your own personal USS Enterprise.

Overall, though, the sound of the future of the average automobile is probably nothing at all. There will be dings and beeps to alert pedestrians when reversing, but other than a little tire and wind noise, driving will be largely a silent affair.

Manufacturers may start piping the soundtrack into the cabin. In fact, they already do. The purists grumble about it, but it's basically like hooking up a pair of headphones to that guitar amp. You're still getting the experience, you're just not broadcasting it to everyone.

As with manual transmission, having a loud car will likely become a luxury. It’s already something that makes the average bystander roll their eyes a bit. As electrification spreads, sound and performance won’t be so closely knotted together.

When that day comes, you’ll still find me up in the canyons in some little red barchetta, letting the internal combustion engine sing its final aria. I won’t subject you to it of course. However, if the weather’s fine, and the roads are empty, feel free to come and sing along.

Opinion
GM and Volkswagen are charging ahead too aggressively with electric vehicles Subscriber content
August 14, 2019 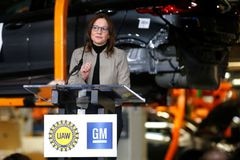 Is the ride-share pilot in Calgary taking a nosedive? Subscriber content
August 13, 2019 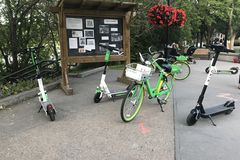