At the General Motors plant in Lake Orion, Mich., two workers put a gas tank into a Chevrolet Sonic in just over a minute.

Then an eerily-silent automated electric cart sped across the floor to deliver a battery for the next car on the line – an all-electric Chevy Bolt.

The same two workers attached the Bolt’s battery in the same time it took them to put in the Sonic’s gas tank. Then another Sonic rolled up, needing a gas tank.

This was in March, just before the COVID-19 pandemic shut U.S. car-manufacturing plants, including Orion, for two months.

The plant, which reopened this week, shows that workers building electric vehicles (EVs) can be the same people who build gas ones. Since 2016, this plant has built both the Bolt and gas-powered Sonic.

At every station on the line, each worker – there are over 1,000 here – are also trained to work on either car.

“Sometimes there are a bunch of Bolts in a row – it really depends on the orders we get,” said Jack Hund, GM’s EV/AV plant launch manager.

After Orion was opened by U.S. President Ronald Reagan in 1984, the plant made sedans, including the Cadillac Fleetwood and, later, the Chevrolet Malibu. It was shut in 2009 when GM declared bankruptcy.

But thanks to thanks to US$1-billion in grants and tax incentives, it reopened in 2011 and started building the Sonic.

Electric cars are set to rescue another Michigan GM plant.

Hamtramck, which made the Chevy Impala, was slated to close permanently along with four other North American plants in 2019. But in January, GM announced that it would spend US$2.2-billion to refit the plant to produce electric vehicles, including a Hummer pickup truck that, before COVID-19, was supposed to launch next year. It’s still unclear how many people that plant will employ when it’s operational.

GM says it plans to sell 1 million EVs a year by 2025. In March, it revealed 10 concept EVs, most of them larger SUVs.

The gradual shift to EVs is a long-term bid to save GM from sluggish sales and more plant closures.

Other electric car makers have reopened shuttered automotive plants in the U.S. In 2010, Tesla took over a factory in Fremont, Calif., that had been built by GM decades earlier. Likewise, startup Rivian is spending US$750 million to convert a former Mitsubishi factory in Normal, Ill., into an electric truck factory.

Could COVID-19 change these plans?

The shutdowns have hammered the auto industry overall, but electric cars might fare better than gas cars. Cheap gas and the shaky economy are expected to translate to 18-per-cent fewer EV sales than last year, but that’s still better than the 24-per-cent drop expected for gas cars, according to analyst Bloomberg NEF. Bloomberg NEF’s new report predicts that EV demand will rise in the long term, with electric cars counting for 58 per cent of new cars sold by 2040. That would mean 54 million EVs sold a year.

EVs count only for a small fraction of sales right now, but Bloomberg predicts sales to rise from 1.7 million in 2020 to 8.5 million by 2025 as demand increases in Europe and China, batteries get cheaper and more charging infrastructure gets built.

By the start of the next decade, EV sales could hit 26 million. That move could happen even faster if governments push EV manufacturing in their post-COVID recovery plans.

In France, French Environment Minister Elisabeth Borne said the government will expand subsidies for electric cars as part of a plan to help the auto industry weather the downturn caused by COVID-19.

Although that kind of government support for EVs is unlikely under the current U.S. administration, GM says it’s sticking to its plans, despite an 86-per-cent drop in net income during the lockdown.

“We understand the seriousness of the business actions we have taken,” GM Chairman Mary Barra said in a call with analysts this month. “We will continue to [commit to EVs] because that’s what we think is the right thing to do for the future.” 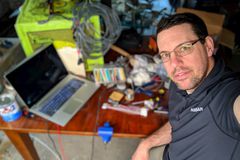 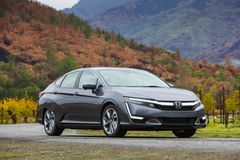 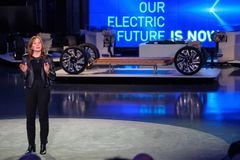