I was stopped at a red light in downtown traffic, waiting to make a left turn. There was a bike lane on the far left, and a few cyclists, rather than waiting to turn left when the light changed, illegally rode across the pedestrian crossing in front of me to the opposite side. The light changed to an advance green. As I began to drive forward, a cyclist on a bike share bicycle flew in front of me from the right. I hit the brakes, barely avoiding hitting him.

He then pedalled merrily on his way.

I try to maintain a minimum of one metre’s distance from cyclists. It’s the least I can do and it’s the law. In Ontario, failure to do so can result in a $110 fine. In Quebec, where bike cops use an ultrasonic device that detects when a moving vehicle is giving less than one-metre’s space, the fine is $200.

Responsible drivers allow cyclists sufficient room to pass. As the operator of the faster and more potentially lethal of the two vehicles, responsible drivers yield to cyclists. These regulations are as they should be. Cyclists are vulnerable and need to be protected.

Cyclists, however, don’t always make it easy. How, for instance, was I supposed to anticipate the guy who flew illegally into a pedestrian crossing out of my blind spot while facing a “no walking” signal? He acts like a cyclist when he wants and a pedestrian when it suits him.

The worst behaviour I see is “popping,” which is most prevalent during the fierce competition and reckless bravado of the morning and afternoon rush hours. Poppers are the bicycling version of drivers who weave in and out of traffic without signaling. If you are a fan of championship bicycle racing, but can’t afford to fly to the Tour de France or the Amgen Tour of California, may I suggest a drive by your local bike lane around 8:30 in the morning?

Popping consists of vaulting out of the bike lane in order to pass a slower rider. The popper veers into the traffic lane without signalling to either vehicles or to the cyclist being passed. So, instead of being able to offer a cyclist a full metre, the driver has about a foot of space. The practice is fine, so long as there are no unforeseen incidents. By pulling so close to a moving vehicle, however, the “popper” has reduced the amount of reaction time available to the driver. If the cyclist, for instance, hits a pothole and falls over, he or she may be falling right underneath a moving car that doesn’t have time or space to move out of the way.

“Popping” is an ironic spectacle because these are the kinds of people who would key a car for blocking the bike lane and yet, when they pop out into traffic, they are voluntarily placing their bikes dangerously close to moving automobiles.

How is a responsible driver supposed to accommodate a cyclist who suddenly noses in front of them or pops out twelve inches away?

Popping should not be confused with a cyclist choosing to occupy the car lane. If traffic and the cyclist are running at relatively the same speed, there is nothing wrong with a cyclist occupying the car lane. In fact, a cyclist may choose to enter the lane at any time, especially if the road is too narrow to allow for a safe and comfortable ride on the right. At the intersection of my near-miss, cyclists routinely occupy the left turn lane and I’d much rather a rider do that – it’s safer than popping beside a vehicle or bolting through a pedestrian crosswalk at top speed. Cyclists are highly visible when they are occupying the lane. Nor should they feel awkward. It’s their legal right.

If you’re going to pass a fellow cyclist in the bike lane and you want to pop into the car lane, at least signal. You’ll still be shrinking the one-metre buffer, but at least you’ll be letting us know, “Daredevil at Work.” 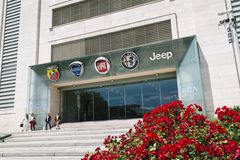