There won’t be racing at the new Oro track for a couple more years, but that didn’t stop Subaru bringing a WRX STI here for me to rip around on the dirt.

Oro Station will be a $260-million “automotive innovation park” between Barrie and Orillia, and it was given Grade 3 design approval just this month by the Fédération Internationale de l’Automobile (FIA) to be an internationally sanctioned motorsport circuit.

Right now though, it’s still half-a-million square feet of fields, woods and dirt. Lots of dirt. The kind of dirt that 4WD rally cars like to chew up and spew out the rear in giant plumes. In other words, a playground for STIs.

There’s a 1.2-km loop cleared from the trees that will be corners 3 through 7 at the north end of the planned 4-km track. That’s where I put in four laps over the graded dirt, though the course churned up pretty quickly. Ontario’s recent rain turned the surface into deep, wet mud, but a couple of days of clear weather dried it just enough for the STI to tackle with its stock Yokohama tires.

It’s one thing to drive around a dirt track; it’s quite another to do so at speed. Most SUVs will have little trouble clomping along, provided they don’t stall in the patches of soft earth and leave their street tires spinning. Subarus, however, always have power to all four wheels, and you can actually feel the individual tires clawing the ground for grip.

I drove a standard WRX around the course before getting into the seat of the STI. The WRX is the softer version of Subaru’s rally sedan, though it’s hardly soft. It has a 2.0-litre turbocharged engine that produces 268 hp, and it makes a lot of the driving decisions for you. There are three drive modes (Sport, Sport Sharp and Smart) that mostly adjust the throttle sensitivity. There are also two differentials, at the centre and the rear, and the long suspension is a little more forgiving to the passengers’ kidneys.

The WRX was a lot of fun and I was quite happy to zip around the deteriorating course, hitting 80 km/h on the short back straight. Then I climbed into the STI.

If the WRX is a fighter jet, then the STI is a rocket ship. Its larger 2.5-litre turbocharged boxer engine produces 310 hp and 290 lbs.-ft. of torque, though you have to keep the revs up for that. It’s only available with an excellent six-speed short-shifting transmission that is linked to an electronically-controlled centre differential, which is in turn paired to a Torsen limited-slip differential in the rear and a helical limited-slip differential in the front.

What’s that in English? It means the driver can control the amount of drive that’s sent to the front or the back, in nine increments from a 50-50 split up to a 41-59 split. When you drive through a corner and tap away at the differential button, you can actually feel the bias shift from the front to the rear. I can’t think of any other production car that provides this.

“Depending on the driving situation, or the surface that you’re on, you may want a different amount of torque going to the front or back,” says Evan Lindsey, car line manager for Subaru Canada. “If you’re doing a hill climb, you probably want to put a little more torque to the front. If you’re doing a hill descent, you probably want a bit more to the rear.”

More than that, the mechanical differentials at the front and back of the STI are almost impossible to fool.

“Electronic differentials are really trick – the technology behind them is fantastic,” says Lindsey, “but when you’re in a no-grip situation where all four wheels are spinning all the time, computers can get kind of confused and they’re not really sure what’s going on and where to send the torque. But with a mechanical system, it doesn’t matter – it’s just going to send the torque wherever it needs to go.”

This sounds very niche, since most Canadians don’t go hooning around dirt tracks and especially not in a $50,000 STI. They do, however, drive on slippery winter roads, where ice takes away the grip of all four tires. Most all-wheel-drive vehicles can move the power to the wheels where it’s needed for the best grip, but the Subaru system does it exceptionally well.

On my final lap in the STI, fresh from barrelling down the short back straight at 100 km/h and filled with confidence, I misjudged a tight left turn and slid the car off the side of the course. No damage was done, but I was reminded of Mr. Scott in Star Trek, warning that “ye cannae change the laws of physics.”

Maybe not, but with the right combination of electronic and mechanical wizardry, you can stretch them farther than you ever thought possible. 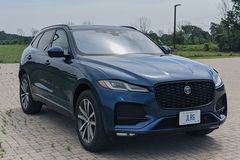 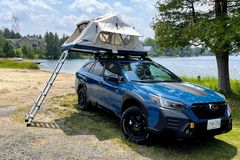 Car Review
The 2021 Hyundai Elantra N-Line is a practical sedan with just enough performance to be really good fun
July 8, 2021 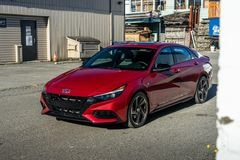