Plans to put protected bike lanes on Vancouver’s Granville Bridge are a hit with walkers and cyclists, but some drivers are having trouble crossing over to the idea.

In a survey from February this year, more than 70 per cent of people overall were in favour of a $30-million to $40-million redesign. It will turn two of the eight lanes on the bridge – built in 1951 for a planned downtown freeway that never materialized – into dedicated space for cyclists and pedestrians.

People who were against taking away space from cars worried that the changes won’t actually make anyone safer and will snarl traffic across downtown. Experts say those are common arguments against protected bike lanes – lanes that are physically separated from cars and pedestrians.

But there’s increasing evidence that separate lanes for bikes can reduce congestion, improve safety and get more people cycling.

“There aren’t really any negatives to protected bike lanes,” says Michael Brauer, a professor at the University of British Columbia’s school of population and public health. “Overwhelmingly, the safest form of bike infrastructure is that physical separation. It doesn’t have to be a raised curb, necessarily; it could be a line of planters.”

A 2011 study of cyclist injuries in Vancouver and Toronto found that protected bike lanes were safer than painted bike lanes on streets with parked cars, safer than multi-use paths for cyclists and pedestrians and safer than streets that had “sharrows” – shared lanes for cars and bikes.

In fact, sharrows – biking symbols and arrows painted on streets – might be more dangerous than having nothing at all, says Wes Marshall, a professor of civil engineering at the University of Colorado.

“They provide a false sense of security,” Marshall says.

Protected bike lanes might make surrounding streets safer for cyclists, too. Another 2019 Toronto study found that protected lanes reduced crashes between cars and cyclists not only on streets with the lanes, but also on neighbouring streets.

But it isn’t just cyclists who get the safety benefits from protected lanes. A 13-year study of a dozen American cities found that protected bike lanes led to fewer deaths among all road users, including drivers.

“The cities building the most protected infrastructure had 40 per cent fewer fatalities overall compared to an average city,” says Marshall, the study’s co-author. “That’s because the lanes help slow cars down – so it’s not just safer for cyclists.”

When it comes to safety, not all protected bike lanes are the same. For instance, a row of plastic bollards can leave big gaps that cars can enter.

“When Denver first put them in, one of my students found that cars were using them as a lane 60 times an hour,” Marshall says. “So for fun, he tossed out some cones and that turned it into one or two an hour – so the protection has to be good enough to really separate it.”

Even the best-designed protected bike lane won’t be safe if it flows into a dangerous intersection where cars right turn in front of bikes going straight.

“The majority of collisions happen at intersections,” UBC’s Brauer says. “The intersection has to be well-designed to keep cars and bikes as separate as possible – in the Netherlands, they’ve really engineered out any intersection between bikes and cars at intersections.”

Opponents of protected lanes say that taking lanes from cars will cause gridlock. But that’s not accurate, Marshall says.

“In an urban network, it’s the intersection and not the number of lanes that determines traffic flow,” Marshall says. “If you have a four-lane road and you take away a car lane or two, you should not see reduced capacity as long as you do a good job at the intersection.”

In Toronto, for instance, travel times along Bloor Street between Bay Street and Ossington Avenue initially increased by eight minutes during afternoon rush hour once protected lanes were installed.

But that was cut to four minutes after the city adjusted signal-light timing at the intersections.

Congestion, while frustrating to drivers, can have safety benefits.

“Most transportation engineers want to see some level of congestion to help keep speeds down – speeds tend to creep up if roads are completely empty,” Brauer says.

Plus, frustration with being stuck in traffic can encourage people to trade cars for other ways of getting around. That switch is ultimately better for safety, congestion and pollution, Brauer says.

If they choose to walk or cycle, it’s better for their health and better for society “because we all pay for health care,” Brauer says.

Ultimately, protected bike lanes encourage more people to get out on bikes because the lanes feel safer, Brauer says. They give space for people who wouldn’t ever bike on busy city roads, including families with children.

“If people don’t think cycling is safe, they won’t even try it,” Brauer says. “It shouldn’t just be for risk-taking young men, who, traditionally, were the only people transportation engineers were thinking about.” 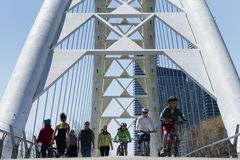 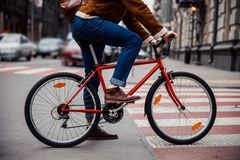 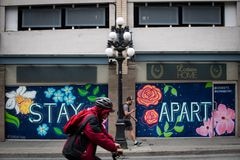