Nothing else hauls people and things like a three-row SUV. Combining most of the attributes of a school bus, a pickup truck and a front-line battle tank, these behemoths of the road are endlessly capable, and most aren’t the plodding saurians they once were.

Almost every manufacturer produces at least one full-sized sport utility, with a varying mix of off-road capability, hailing capacity, passenger-friendliness and well-sorted tarmac manners. So which row-row-row might best float your boat?

Modern manufacturing methods have blurred the line between what used to be considered a mere crossover, and a true, truck-based sport utility. However, if your primary reason for considering a full-size SUV is towing loads of 3500 kilograms or above, you’re going to want something with a proper spine.

Unibody three-row SUVs are still capable of towing some serious weight, but even with modern construction methods, a truck-based chassis can't be beat. Body-on-frame SUVs use the same starting point as a workhorse pickup truck, and then add passenger space on top.

The disadvantages of building a vehicle around a less-flexible steel frame are usually a rougher ride, with more ponderous handling. However, it’s hard to argue with the 4218 kg pulling power of the Ford Expedition. Equipped with a 10-speed automatic transmission and a 3.5-litre twin-turbocharged V6 that produces 470 lb/ft of torque, the Expedition is the current king of the hill in hauling power.

And the big Ford has brains to go with its brawn. When backing down the ramp to launch a boat, a driver can bring the automated trailer assist into play. Rotating a knob controls the direction the trailer moves in, helping for kink-free reversing.

Other good choices for body-on-frame towing include the Chevrolet Tahoe/Suburban, or the Nissan Armada (and it’s well-equipped twin, the Infiniti QX80). Boat, horsebox or camping trailer, a “true” SUV will pull it best.

If your towing needs are not quite so gargantuan, a full-size SUV might be on the shopping list for its three rows of passenger-carrying capacity. Yes, you could just cram the kids and their friends in a minivan, but even something like the all-wheel-drive Toyota Sienna has limited ground clearance if you're headed into the back country.

If you're thinking gravel, chances are you're thinking Subaru. Fans of the brand used to have to shop elsewhere when the brood outgrew the Forester, but now Subaru has a full-size SUV in the family with the three-row Ascent.

The Ascent is typical of the new breed of mainstream unibody SUV. It has a useful towing capacity of 2270 kg, suitable for smaller boat and camping trailers. It also drives with surprising nimbleness, thanks to a low-mounted 2.4-litre turbocharged flat-four engine.

Long-distance fuel economy is quite reasonable at 9.0 litres/100 km on the highway. The Ascent’s camera-based driver assist systems add a level of safety and take some of the drudgery out of the long commute to the trailhead. When you get there, Subaru’s well-proven all-wheel-drive and X-mode traction control systems make short work out of any moderate off-roading.

Further, because Subarus tend toward boxy practicality rather than urbane stylishness, the Ascent is usefully roomy inside. It’s also as appealing to kids as a box set of Paw Patrol and a new puppy. Handholds on the middle row of seats make scrambling in and out that much easier, the rear windows side fully open, and there are plenty of USB ports for devices when the scenery is less interesting.

Other family-centric choices with some mild off-road chops include the smooth Honda Pilot and Toyota Highlander, or the particularly spacious VW Atlas and Chevy Traverse.

Best for a family in a hurry

While they're hardly the most fuel-efficient options out there, many manufacturers make high-performance variants of their three-row crossovers. Trying to turn an airliner into a fighter plane doesn't always work, but there are a few exceptions.

The Durango SRT, for instance, packs all the muscle-car fury of the Dodge Challenger and Charger in a more family friendly package. It nary needs saying that its 6.4-litre V8 is hardly a hybrid, and the 20-inch wheels can make the suspension choppy over less-than-perfect roads. However, if you want a Hemi in your three-row SUV, you can have it here.

Less of a blunt instrument, but equally quick, is the new Ford Explorer ST. Taking a few drive-train cues from Ford’s police pursuit package (but with interior luxury touches for law-abiding citizens), the twin-turbo ST launches later this year as the top trim for the strong-selling Explorer.

If liveliness is preferred over outright power, then Mazda’s excellent CX-9 remains the driver’s choice in the three-row segment. Its turbocharged 2.5-litre four-cylinder engine makes 250 hp on premium or 227 hp on regular-grade fuel, but its the 310 lb/ft of torque that’ll have you scooting down the road with aplomb.

Best for leaving a small footprint

Even if necessity for towing or passenger capacity is driving you to full-size SUV ownership, you still might be looking for a green(er) option.

One emissions-free choice, for those looking for vehicle that'll only see tarmac duty, might be the Tesla Model X. Quick enough that it'd actually be a good choice for the previous category, the Model X features room for three rows of passengers, some of the most advanced driving assists on the market, and a well-supported charging infrastructure. Ignore all the persistent drama around Tesla founder Elon Musk, and it's a delight to drive. 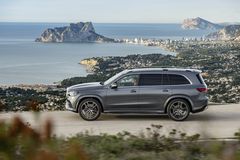 Lincoln’s Navigator Reserve L is a smooth, luxurious behemoth
May 6, 2019 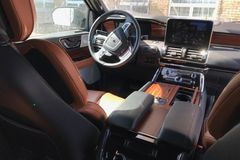 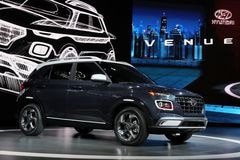