Whenever I hear experts crowing about the wonders new automobile technology will bring, I’m reminded how badly drivers use the technology they already have. The most striking example is the turn signal.

A significant portion of drivers can be divided into two categories:

How can motorists mess this up? You just pull the handle and the clicking noise starts!

While some driving transgressions are rare (such as driving the wrong way on the highway), the misuse of turn signals is as common as black flies in June. During any trip, you’re going to see drivers who change lanes and do not signal, or who turn left or right and do not signal. One trait they all share is an indignant alarm when the rest of the world almost crashes into them.

The other day a fellow in a Subaru almost smashed into me. I was turning right, he was – apparently – turning left. Sure, I had the right of way, true, a driver should not turn left into the far lane, but at least if I had known he was going to execute these poor manoeuvres I could have been prepared. He glared at me as he turned. Pal, how am I supposed to know where you’re going if even you don’t?

We’re talking about a piece of technology that has been around almost as long as the automobile. In America, Canadian-born silent film actress Florence Lawrence invented an “auto signal” in 1914 (she also invented the brake light). Sadly Lawrence, who was known as the world’s “First Movie Star,” failed to patent either. In Europe, there were “trafficators” starting in the 1900s. Buick installed its “Flash-Way Directional Signal” in 1939. Turn signals have been mandatory for over 50 years. They are easy to understand and use. People who are technically savvy enough to be distracted by their mobile devices while driving should be able to grasp their use.

Again, I ask, how are people struggling with the concept?

What do face masks, turn signals and condoms all have in common? If you don’t use them as intended they don’t work. The name is a giveaway. When you intend to “turn” you “signal” to communicate with other drivers. You don’t signal after you turn, as some do, you don’t start signalling as you are turning, you signal before you turn or change lanes.

You know who really needs motorists to use their turn signals? Truckers. That’s because they do not wish to collide with automobiles that suddenly pop from one lane to the next without signalling. It is far from an innocuous transgression. The New York Times reported in 2019 that, in the previous year, 542 collisions in New York State involved signalling violations.

A 2006 study by American car insurer Response Insurance found that 57 per cent of drivers admitted to not using their signals. The reasons? Pretty much what you’d expect.

Is there reason for hope? The New York Times concluded, “Turn-signal nirvana may not arrive until autonomous cars do, when drivers have been removed from the decisions. Experts at companies developing self-driving technology said that the capacity to trigger the appropriate signals when turning or changing lanes would be part of any fully autonomous driving package. The same applies to responding to the turn signals of other cars. Laziness will not be a factor.”

Call me old-fashioned but machines are changing – not people.

Wherever human beings can be found doing things, laziness will always be a factor.

It’s one of our defining characteristics.

In the meantime, let’s all wake up, have a proverbial cup of coffee and remember to use our turn signals.

Drive-thru dining: From an easy convenience to a pandemic-era lifeline
July 29, 2020 Take the Family Road Trip Quiz to see if you’re prepared to hit the highways
July 14, 2020 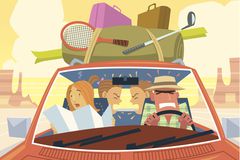 I don’t begrudge those who like their driving playlists, but they’re not for me
June 30, 2020