Is there anything more quintessentially Canadian than a drive through the Rocky Mountains in summer? I made this trip in July.

When my sister and brother-in-law invited me to hitch a ride from White Rock, B.C. – where we had gathered for a family wedding – to our cabin in northern Saskatchewan, I jumped at the chance. The idea of a two-day road trip in July with the prospect of an overnight motel stay in Hinton, Alta., a journey alongside the mighty Thompson River and the potential for seeing wildlife was exciting.

As Iʼve said before, I love to drive, but I love being driven. I also enjoy reading maps, so I thought perhaps I could act as navigator. The vehicle was my nephew’s sporty castoff: a 2006 Toyota Rav4 with a V-6 engine, all guts and glory.

It was drizzling the morning we left – the weather, having taken a turn, made it easier to leave our ocean perch. Our plan was to drive up the TransCanada to where it joins Highway 5, take the Yellowhead #16 route through Jasper National Park and then onward to the Prairies.

My brother-in-law’s iPhone was mounted on the dash, set to Google Maps. Relying on GPS hadn’t occurred to me. Aha. So Google Maps Girl would be on board, she with the lilting accent and crisp delivery. “In 600 metres, turn left.”

In real life, GPS Girl is Karen Jacobsen, an Australian-born, New York-based singer and voice-over artist. She loves her job. Also known as the Dashboard Diva (and Siri Australia), Karen’s made a pretty nice living in a spinoff career as a motivational speaker, helping people better navigate their lives.

She’s famous. Millions of drivers act as if they have personal relationships with her. They praise her when she gets it right and shout at her when she misdirects, gets overly wordy or sounds impatient.

On our trip, we didn’t get off to an auspicious start. She had us driving in quadrangles, mostly on country roads flanked by horse farms, with no major highway in sight.

“What the bleep?” my brother-in-law said. Inexplicably, GPS Girl was attempting to guide us south, across the border, through the United States. What was she thinking? None of us carried passports. That might have been when my brother-in-law called her a bossy something or other – BB for short – which cut the tension and made us laugh.

My sister and I resorted to old technology, a tattered CAA map. It was missing a few roads and small towns, but only in the creases.

We humans sorted it and found the highway north. GPS Girl acted as if nothing had happened.

At that point, it dawned on me that we’d been ticked off by a disembodied female voice. Karen landed the job because she was the best (yay), but can there be a downside for women?

Surely Google offers an equal-opportunity/abuse gender option. Perhaps we should switch to a male version for the next province?

Turns out you can’t. We tried.

Some GPS apps – including the Google-owned Waze – offer “guest” voices of celebrities such as Morgan Freeman, Mr. T and former CBC anchor Keith Morrison, known for his cheeky gravitas voicing true-crime stories on Dateline NBC. But we couldnʼt find any male voice options on ours. (Note to Google: Maybe itʼs time to “recalculate” those options.)

Meanwhile, GPS Girl guided us up Highway 5, past breathtaking Mount Robson, through Albertaʼs Jasper National Park, where we stopped to admire the elk. (The last time I lived this adventure, I was a kid on holiday with my family. We were taking an elderly Scottish aunt through the mountains. Auntie Rae is immortalized on film feeding a deer through the car window. It was another era. She’d be a jailbird today.)

When we went off-route for gas or lunch, GPS Girl caught on fast. Near Lloydminster, Alta., she diverted us around road construction. But her finest achievement, by far, was delivering us to the cabin door.

We didn’t need her then, of course. She remained plugged in for our amusement. “In 200 metres, turn left at West Chatfield,” she said, nailing it.

Hats off, Karen. The cabin is not an easy find. So Iʼll leave the last words to you.

“You have reached your destination.” 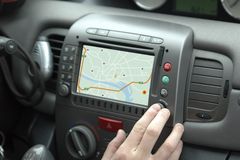 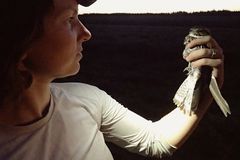