If haven’t got your winter tires on now, you may have to wait a while. Thanks to COVID-19, there could be a decrease in supply. Production slowed down once lockdowns went into effect last spring. Plus, closures meant some drivers couldn’t visit mechanics and spent the summer driving on their winter tires; now, those tires will need to be replaced.

In the last few weeks, there has been a rush to get winter tires put on. This month in Quebec, drivers are waiting up to 30 days to book an appointment. Similar wait times have been reported in PEI, southern Alberta and Calgary.

According to a report from PMCtire, an online tire and wheel retailer based in Quebec, driving on winter tires during the summer degrades them more quickly and can “increase the risk of hydroplaning and skidding in the coming season.” PMCtire also cites an increase in demand this year, as snowbirds who won’t be able to migrate south will need to purchase winter tires. All of which means it may be harder to do the responsible thing and get your winter wheels on.

There is a section of drivers to whom this news will elicit a “Who cares?”

They are an automotive sub-species of conspiracy theorists, like those who believe the world is flat. To these folks, all calamities are planned. Every mishap, no matter how big or small, has a hidden hand behind it.

Winter-tire truthers believe that winter tires are a con, one cooked up to make manufacturers and automotive shops money. You don’t need winter tires unless you live on a snow-covered peak. All-seasons are just fine for city driving. If you buy a set of winter tires, you’re a sucker. They are a waste of money in sunny climes such as southern Ontario.

They’re certain of it.

Unlike some conspiracy theories, which can be dismissed as the inane ravings of social misfits, who, in a more civilized age before social media, would dwell in quiet desperation in their parents' basements, winter-tire conspiracy theory needs debunking. If you think the world is flat, you’re not really harming anyone; in fact, by espousing this belief, you’re doing the public a favour by alerting it to your intellectual limitations. Skidding around on your bald all-seasons between December and March, however, puts people in jeopardy.

Like any conspiracy theory, there is some truth to the winter-tire skeptics' line of thinking. You can, for instance, drive on all-season tires during the winter. You can. It is within the realm of possibility. Of course, you can walk around in sub-zero temperatures wearing only a bathing suit. You can walk around during an ice storm without shoes on. You can buy a power drill and perform oral surgery on yourself. You can saw off your hand and microwave it.

You can do all these things. It’s just that, like driving on all-season tires during the winter, they’re really bad ideas.

There are numerous benefits to winter tires. They are made from a pliable rubber compound that stays soft under 7 degrees Celsius and gives a tighter grip on the road. All-seasons stiffen. Winter tires allow for shorter braking distances. Studies have borne this out. I’ve experienced the difference on test tracks; it is significant. Winter tires have deeper tracks, which bite into slush and snow. All-seasons are not designed to clear snow and slush.

To which winter-tire truthers could reply, “No, they don’t.”

They could reply this way. They do. It’s just a very weak argument, like looking at a globe and saying “I don’t believe it.”

Given the realities of the Canadian cold season, it’s strange that winter tires remain optional in most of Canada. They are mandatory only in Quebec, where motorists can be fined up to $300 if found to be driving without them between December 1 and March 15. In provinces such as Alberta and Nova Scotia, some drivers opt for studded tires.

It’s even stranger that winter-tire truthers, who happily wear seatbelts, would eschew a technology that could save their lives. Consumers spend small fortunes on their cars; why not go the extra few inches and protect their vehicles and themselves by putting on winter wheels? Winter tires aren’t cheap, but they’re less expensive than an accident. Where’s the logic? Where’s the reason? What’s the answer? Some forms of human behaviour defy explanation.

It’s all a conspiracy.

For the snowbirds who are staying home this year, may I suggest considering winter tires?
Subscriber content
September 26, 2020 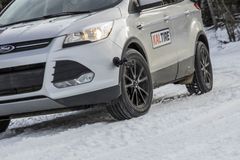