By the time the Red group gets their turn on the track, the threatened rain has arrived in buckets. Watching from the sidelines, it hardly seems to be slowing them down, but still, I’m glad to be in the Blue group.

As scheduled, we Blues did our track session first, and we beat the rain. Any time I’m learning a new track with 500-plus horsepower under my right foot, dry beats wet.

BMW is touting these two vehicles as the first-ever M variants of the X3 (Sport Activity Vehicle) and X4 (Sport Activity Coupe) compact crossovers. And so they are, once you realize that these are full-on motorsport M models, not to be confused with the existing (and continuing) M Performance (“M Lite,” if you like) M40i versions.

Last year, the M division achieved its goal of selling 100,000-plus cars two years ahead of schedule, and the biggest-selling M-badged BMW was the X3 M40i. That persuaded BMW there was room for even more power (and, dare we say, profit) in the X3/X4 lineup.

As with their lesser siblings, the Ms are powered by a turbocharged 3.0-litre inline six-cylinder engine, but this unit (coded S58B) is almost entirely different from the 3.0-litre turbos in both the X3/X4 M40i (B58B) and in the M3 sedan and M4 coupe (S55B).

Compared with the M40i, the new M mill has, among other things, a wider bore and shorter stroke, two turbochargers instead of one and a highly intricate cylinder-head casting that is enabled by a novel technology using 3D-printed patterns.

The transmission is an M-fortified version of the ubiquitous eight-speed, and power is routed to the wheels through an M xDrive all-wheel-drive system based on the M5s. On the X3/X4 Ms, the AWD is rear-biased, but there’s no 100-per-cent rear-wheel-drive setting.

As I will soon learn on road and track, even M-specific steering doesn’t deliver the frictionless, light-and-lively on-centre feel of some rivals. The Msʼ helm is firm, accurate and relays a reassuring feel, but lacks the pin-sharp turns that I prefer. But that’s just me. Dirk Haecker, vice-president of engineering for BMWʼs M division, is clear what BMW thinks is best for its customers: “We want to have a very linear response,” he tells me, “not aggressive or surprising.”

Like almost every other aspect of their dynamics, the Ms’ steering characteristics are adjustable, but even the comfort setting – which we were encouraged to use, even on the track – is firm.

Other adjustable features include engine aggression, exhaust loudness, transmission responsiveness and shift speed, damping stiffness, stability-control lenience and all-wheel-drive front/rear bias. Even without a rear-wheel-drive setting, the Ms can be set up to drift, BMW says.

You can individually set each parameter to your liking and then save them as a package that can be recalled at the press of a red M1 button; a second M2 button lets a second driver (or your alter ego) do the same.

Even with everything set to maximum docility, you know you’re driving a hardcore M car. There’s a gritty rolling feel, and the ride is stiff (albeit commendably free from sharp-impact harshness). If I could change one thing, I’d like a quieter engine setting: The fruity burble is fine when you’re in the mood, but even at its most subdued, enough growl remains to coarsen the inherent silkiness of the inline six.

All the Ms at the preview event were Competition models, and for the track we all drove X4s – fittingly so, given their more car-like stance. On the unfamiliar track, more laps would have been welcome, but if I didn’t feel at home, the X4 M emphatically did. Its limits are higher than the M40i I drove on another track last year, and it leans even less, but it carves through curves with the same vivid seat-of-the-pants feel that inspires confidence to push your limits from the get-go.

Perhaps BMW M’s most telling achievement here is that even when zipping around a track, it never crosses your mind that you’re driving an SUV – it’s just a very talented track car, period. And come to think of it, if I had been driving with the Red group in the rain, it’s hard to imagine any other 500-horsepower vehicle I’d rather have done it in.

Ride height is unchanged, but the M models are identifiable by their wheels (20-inchers on the base model, 21-inch on Competition), gaping front air ducts, different side vents, rear spoilers and ubiquitous gloss-black accents. Nothing too over-the-top.

M-specific furnishings include the steering wheel, gauge cluster, leather and sport seats (M Sport buckets on Competition), all of which build on the basic car’s well-judged blend of comfort, visibility, finish and sound ergonomics. Less user-friendly, however, is the M shifter, which you toggle sideways to select drive or reverse. Rear-seat space remains adequate, but many cheaper CUVs are roomier.

BMW claims 0-100 km/h in 4.1 seconds for the Competition (4.2 for the base). That (just) beats Jaguar and Porsche alternatives, but not the Mercedes. We’re surprised the BMWs aren’t quicker, considering the M40i claims 4.8 seconds with 30-per-cent less power. Maybe it’s the turbo lag; boot the accelerator to the mat and you can count potatoes before full boost arrives at about 3,500 rpm. But my, the engine does love to rev; it feels happy to spend all day at the lofty 7,200 rpm rev limit.

The X3 M and X4 M cargo volumes are greater than and about the same, respectively, as their competitors. Both cargo holds are highly usable, with 40/20/40-split flat-folding seats, boxy sides and hidden underfloor storage.

BMW makes it even harder for car-lovers to scorn SUVs. 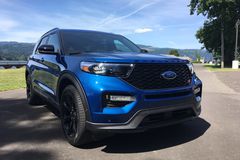 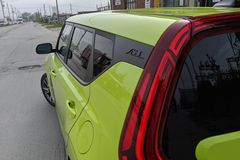 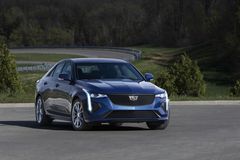