I’m thinking of buying a convertible. I was initially drawn to the Jaguar F-Type, but I am concerned about seat comfort on longer drives and the very small trunk (at a minimum, it has to have enough room for golf clubs). Are the Porsche Boxster or BMW Z4 better options? I would love to have a manual transmission – they are so much fun to drive – but they seem increasingly hard to find on new vehicles, so I’m willing to look at something pre-owned with low mileage. I also looked at the Audi TT, but wasn’t keen on the design. Any other suggestions? – Bruce, Toronto

Gentile: Convertibles – nothing beats them, especially in the summertime. There’s no better feeling than hitting the open road with the wind in your hair and the sun on your skin. I especially love a hard-top convertible because you can drive it year-round.

Richardson: I love convertibles too, but they’re not as practical as fixed-roof cars for exactly Bruce’s concern: the smaller size of the trunk. Remember the worst of them all, the Pontiac Solstice? You could barely fit a sandwich back there.

Gentile: OMG! Yes, the Pontiac Solstice and its cousin, the Saturn Sky, were useless – not only for trunk space, but interior cabin room, too.

Richardson: They both looked great, but they just couldn’t compete against the success of the Mazda MX-5, mostly because the Mazda had a far more practical trunk. Its roof tucked away into a dedicated compartment.

Gentile: More practical, but still small. Most convertible trunk designs aren’t smart or spacious. When lowered, the roof often eats up valuable cargo space. And some designs are so intricate and complicated, such as BMW’s, which won’t let you overfill the trunk. So it gets frustrating fast, battling storing cargo with going topless.

Richardson: The roof is a lot of cargo, and it has to go somewhere. I like the BMW designs, though – they won’t let you drop the roof if the trunk is too full, but if you need to fill that trunk, you can suck it up and drive with the roof up.

Gentile: What’s the point of a convertible if you’re going to drive with the roof up? I actually don’t like the BMW trunk design because even when the roof is up, there’s still little space in the trunk. If you look at the 4-Series hardtop, when the roof is up there’s some space, but lower the roof and there’s not even enough room for a set of golf bags. It’s useless.

Richardson: Nonsense. I always throw my clubs on the front seat, anyway.

Gentile: Don’t you have any friends or family to bring along for the ride? And I must say, I’m surprised you play golf, too.

Richardson: Well, I’ll admit I have more enthusiasm than skill. But since we’re agreed that convertibles have less trunk space, what would be a decent choice for Bruce? I know there’s room for a small golf bag in the Porsche 718 Boxster trunk, and it’s still sold with a stick shift. He’ll probably need to put his woods on the front seat though.

Gentile: And it has a frunk - aka front trunk. Granted, that space is tiny, too. My purse barely fits in it!

Gentile: Fair enough; I can’t argue with you on that point. Besides the space, the 718 is very well-balanced, nimble, and fun to drive. It does cross off many features on Bruce’s wish list.

Richardson: It’s also much better value than a 911, but moving on, Bruce mentions the BMW Z4, which is about the same money at a base MSRP of $62,900. Its luggage space was lousy when it had a folding hard top, but the new model has a fully accessible 280 litres of space in the trunk when the roof’s up. That’s more than double the space in the Porsche and even the Mazda MX-5, and might be enough for two sets of clubs if they’re not overstuffed.

Gentile: Two sets of golf clubs might be pushing it. But the Z4 definitely has more trunk space than the others. I also like the passenger space in the cabin, too – there’s respectable room to stretch your legs. And the seats are very comfortable, especially on long drives. That’s a must on Bruce’s list.

Richardson: You know, Bruce is making a hefty demand for space on fancy European roadsters, but if he really wants a convertible with decent trunk room, he should go American. The Ford Mustang convertible has 324 litres of room and a six-speed stick shift. That’s more than half as big again as the Camaro.

Gentile: Sure, the Mustang convertible has more space with two rows of seats, but it’s big and bulky. And it doesn’t have the caché of a BMW or Porsche. Plus, I’m not a fan of the two long doors; it’s easy to ding them on other vehicles in tight parking spots. Judging from his picks, he clearly wants a two-seat roadster.

Richardson: There’s got to be some compromise if he wants the top down and a set of clubs in the trunk. A two-row convertible leaves the entire back seat for the clubs if it’s needed.

Gentile: Clearly, the BMW Z4 is Bruce’s best bet, followed by the Porsche Boxster. But if he really wants more space, go with two rows of seats for those clubs and consider a BMW 4-Series or even a Mercedes-Benz C-Class.

Richardson: The Z4 has more trunk space, but only an automatic transmission. For about the same money, Bruce can get a Boxster with a six-speed manual shifter. He only carries his luggage sometimes, but he’s always using the gear stick, so I know which I’d choose. 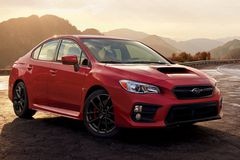 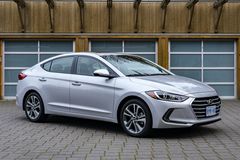 Car Review
In search of a comfy, compact all-wheel-drive vehicle with a stick shift
May 31, 2020 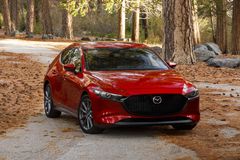