You’re not hallucinating. Most new cars are very similar. The car industry is too big, too corporate and too hemmed in by arcane regulations to do anything truly weird. The business relies on economies of scale to eke out profit, which means new models must appeal to the lowest common denominator.

In this context, the Polestar 1 shouldn’t really exist. It’s too weird, too niche, too cool, but here is it anyway.

The elevator pitch for the Polestar 1 must’ve gone something like this: It’s a Swedish-designed, Chinese-built plug-in hybrid coupe that is unnecessarily fast and very expensive, but it’s going to be so great that it will turn this new electric car company called Polestar (which nobody has heard of) into a household name. Or, at least, that’s the plan.

The brand is the brainchild of Thomas Ingenlath, now chief executive of Polestar and former design boss at Volvo. Ownership of Polestar is split 50/50 between Volvo and its Chinese parent company Geely.

“It’s about creating, doing new things,” Ingenlath said when we met earlier this year. Traditions and expectations put limits on the kinds of cars he could make at Volvo. You get the sense he wanted to break free. “We realized this [Polestar 1] is much more a product for a startup company that does not have to serve an established customer base,” he said.

In a Venn diagram, this car would be all alone in a space between muscle car, ecoconscious status symbol, luxury grand tourer and modern Swedish furniture. The Polestar 1 is elegant and understated where every other big coupe looks angry. It’s effortlessly cool and so very Swedish. Even the car’s paint palette is frigid: steel grey or dark blue or winter white. The brand’s website is so slick you’d think they were selling techwear clothing or the latest, greatest smartphone.

The experience of driving it is a bit like binge-watching one of those Nordic noir murder-mysteries on Netflix – visually stunning and extremely serious with brief flashes of violence. Stab the accelerator and you’re hit with 619 horsepower and 738 lb.-ft. of torque. All that force is generated by a pair of electric motors powering the rear wheels independently, plus a 2.0-litre turbo- and supercharged 326-hp gasoline engine turning the front wheels.

Despite its crisp carbon-fibre bodywork, the Polestar 1 weighs in at a hefty 2,350 kg. The 34-kWh battery mounted in the transmission tunnel is to blame. Because it’s carrying so many extra kilos, 619 horsepower doesn’t feel quite as powerful as you might imagine. Still, 0-100 km/h in 4.2 seconds is quick enough to reliably put a smile on anyone’s face.

From the driver’s seat, you’re always vaguely aware there are strange things going on beneath the surface with this car. Often, it’s totally silent, but without warning the gas engine will suddenly fire up to provide added thrust. Regenerative braking slows you down when you lift off the throttle. Press the brake pedal, and there’s occasionally a split-second lurch as a set of enormous steel discs take over stopping duties.

The steering is direct but lacks feedback. You tend to rely on signals from the chassis, which is surprisingly transparent thanks to the body’s extreme stiffness and well-tuned Ohlins dampers. Any vagueness on turn-in vanishes once you start steering the car on the throttle through the apex and exit of corners. The torque vectoring from the two precisely controlled electric motors on the rear axle is like magic that allows this heavy car to slice around corners seemingly without breaking a sweat.

There’s nothing else quite like it. As a grand-tourer or daily driver, it is a uniquely exciting and practical proposition. With an estimated range of 80-100 kilometres on battery power alone, most days you probably won’t burn any gasoline at all. Total range is 870 km, and if there’s no charging station nearby, you can simply refuel and be on your way.

The cars will be sold online and at stand-alone Polestar shops, with servicing done at Volvo dealerships.

Hardly anyone will buy it of course – Polestar will only produce 500 per year and the price seems a tad high for a car that looks like a Volvo inside – but it’s the sort of car you’re just happy someone had the chutzpah to make. I can’t imagine it’s a money-making product, but as a statement piece, it’s a mighty fine one.

In the two years since Polestar had its coming out party, other electric-car brands have come and gone, but Polestar has followed through on its big promises. The 1 will arrive in Canada in March. The $69,000 fully-electric Polestar 2 four-door will arrive next summer with an estimated range of 450 km. The Polestar 3, a fully-electric fastback SUV, will be unveiled in 2021. It’s a fine plan, but it would be better if the Polestar 2 and 3 were plug-in hybrids like the 1, which offers more versatility.

I’ve got no idea how the Polestar 1 snuck past all the accountants and focus groups and corporate committees, but anyone tired of predictable cars will be very happy it did.

Maybe, just maybe, the most beautiful coupe on the road right now. Gives Aston Martin a run for its money.

The design is all Volvo, with added carbon fibre and snazzy yellow seat belts. The back row can accommodate child seats or, more likely, luggage, since the trunk is a tad small.

The ride may slightly stiff, but top-shelf mechanically adjustable Ohlins dampers ensure you could happily use this as a daily driver.

Volvo’s infotainment system is copy-and-pasted into the Polestar. Unfortunately, it’s a pain to use – laggy and unresponsive. The battery accepts both AC and DC charging.

Open the trunk and you’re greeted with a Museum Of Modern Art-worthy array of orange cables behind glass. They carry the high-voltage juice that makes this car go. Alas, they also cut into the cargo space, which is just 125 litres. 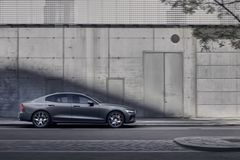