Now it becomes clear. This 2020 reincarnation of the Ford Escape has been such a long time coming – some rivals have been redesigned twice since the current Escape was released in 2012 – because its designers had an exceptionally lengthy to-do list.

Rarely has any replacement of an existing nameplate been so comprehensively and genuinely new while at the same time offering such an array of new powertrains, trim levels and driver-assist safety systems.

Consider, too, that the Escape represents only half of Ford’s latest approach to the compact crossover segment. While the Escape itself takes on a more urban (car-like) persona, there will also be a brawnier 4x4 sister vehicle for buyers who really do walk the outdoors-adventurer talk or who want to look like they do.

There are good reasons why the Gen-4 Escape needed more than just a hasty shake-and-bake redo. It’s Ford’s second best-selling nameplate after the F-Series and it competes in Canada’s single largest vehicle category. For a good part of its career, the Escape was the top seller in that category – a status that Ford would no doubt like to reclaim.

As well, Ford also now needs the Escape to draw in customers who might formerly have purchased one of its recently (or soon-to-be) discontinued passenger cars.

That’s a big burden of responsibility for one small crossover.

We deep-dove into the nuts and bolts of the 2020 Escape back in the spring, so let’s just repeat the Coles Notes version here. The 2020 is based on an entirely new structure that promotes it from having one of the segment’s tightest interiors to one of the roomiest. The rear seats can slide back and forth, and legroom is vast when they’re at full stretch. A bi-level cargo deck maximizes space when set low or, when set high, aligns flush with the folded seatbacks.

Canadian buyers will be able to mix and match between four powertrains, S, SE, SEL or Titanium trim grades, and front- or all-wheel drive.

The base engine is an all-new 1.5-litre three-cylinder EcoBoost engine rated at 181 horsepower, 13 more than its four-cylinder predecessor. An all-too-brief drive indicated solid acceleration and an oddly pleasing engine note.

A largely carryover 250-hp 2.0-litre turbo provides an up-level engine choice that doesn’t even exist among many rivals. As before, it delivers such an easy blend of silky refinement and effortless thrust in routine driving that it hardly matters that it sounds frenzied when driven at 10/10ths.

And then there will be two hybrid models – one self-charging (HEV) and the other a plug-in (PHEV) – that combine electric motors with a 2.5-litre Atkinson-cycle gas engine for net outputs of 200 hp and 209 hp, respectively. The PHEV isn’t ready for test yet, but a 120-kilometre drive in the HEV returned a stingy 5.2 litres/100 km according to the trip computer, which also reported that fully 47 per cent of the (mostly rural) drive was in electric mode.

Ford is also democratizing driver-assist technologies – standard on every trim will be Ford Co-Pilot360 comprising of auto high-beam headlamps, blind-spot warning with cross-traffic alert, lane-keeping alert and assist, automatic emergency braking with pedestrian detection and brake support, and a rear-view camera. An $850 Co-Pilot Assist option on SE and SEL adds adaptive cruise with stop and go, plus evasive steering assist and voice-activated touch screen navigation. Finally, the Titanium has all of the above as standard plus lane-centring.

The Escape will be in Canadian showrooms in mid-October in all versions except the PHEV, which will debut next spring. Opting to buy an Escape is an easy choice. Deciding which Escape might take a whole lot longer.

With a “ruggedized” off-road oriented sister vehicle in the pipeline, the Escape itself gets a sleeker, smooth-surfaced – dare we say metrosexual? – shape to suit its more urban focus.

On the SE-and-up trims, a 10-way power driver’s seat provides ample at-the-wheel adjustability and a tall-in-the-saddle posture if desired. The SE also adds an eight-inch free-standing touch screen (4.2-inch on S) while a digital gauge cluster is exclusive to the Titanium. Luddites will appreciate the conventional hard buttons for HVAC and basic audio functions. A rotary gear selector makes space for a useful open tray on the centre console, and the glove box is bigger than most. Rear-seat riders can sprawl in comfort with six inches of fore-aft seat travel and backrest recline adjustment.

It’s too soon to put numbers to the 1.5 or the hybrid, but the 2.0T is genuinely quick. And the chassis has the moves to match, with lively steering response and taut body control in curves. As with its predecessor, the Escape can be a fun drive, although the brakes are a tad touchy.

Besides all the standard or available driver aids already discussed, the Escape covers the communitainment side with Apple CarPlay, Android Auto, 4G LTE wireless hot-spot connectivity for up to 10 devices, schedulable remote start and lock/unlock. And a class exclusive is available fully automated (that is, no footwork required) Park Assist 2.0.

Even with the rear seats pushed fully back, the 33.5-cubic-foot cargo volume is class competitive; push them forward and the resulting 37.5 cubic feet is near best-in-class. The bi-level cargo-deck floor is a bit disappointing, though: The height difference is only about an inch.

Ford is holding nothing back. The new Escape is a tour de force that will force the competition to raise their game. 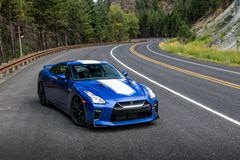 Car Review
The 2020 Legacy is a quality sedan that benefits from Subaru’s off-road pedigree
September 10, 2019 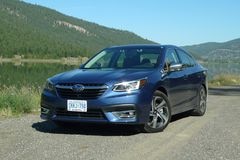 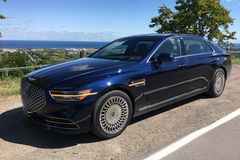