While Toyota has become the poster brand for hybridism, let’s not forget that Honda has been in the game almost as long. In fact, Honda’s first hybrid, the original Insight, came to Canada in 1999, a year before the seminal Toyota Prius (though the Prius was first in Japan).

Be that as it may, Honda’s scattershot approach has failed to have much impact here. For example, even this writer, a devoted long-time owner of a 1985 CRX, was not smitten by the CR-Z, which resurrected the CRX concept as a hybrid in the early 2010s.

Currently, Honda’s electrified offerings comprise the compact sedan Insight, and the midsize sedans Accord Hybrid and Clarity; a hybrid version of the CR-V compact crossover is also coming.

The Clarity is currently Honda’s eco flagship vehicle. In some parts of the world, it’s sold in three versions – fully battery-electric, hydrogen-fuel-cell electric, and plug-in hybrid – though in Canada, we only get the third one, PHEV (plug-in hybrid electric vehicle).

Other brands’ midsize sedan PHEV alternatives include the Ford Fusion and Kia Optima, while a PHEV version of Hyundai’s all-new Sonata is surely coming.

The Clarity offers two trims, asking $40,990 and $44,990, respectively, and an engineering approach different than the opposition – basically less mechanical, more electrical. The Clarity’s gas engine is only 1.5 litres versus the opposition’s 2-litre fossil-fuel burners, but its battery capacity (17 kWh) and electric power (135 kW) are respectively 7 kWh and 47 kW more than the competition’s best efforts.

The Clarity’s claim of an electric range of 77 kilometres handily outstretches the next-best Kia (45 km), but something has to give: the Clarity’s gas tank is only 26.5 litres. That results in a combined NRCan (National Resources Canada) range of only 475 km, while the Ford and Kia each claim almost 1,000 km.

Still, on long drives, most people’s bladders and/or caffeine cravings would mandate a stop every 300–400 km anyway. Finding gas obviously isn’t an issue, and if you also plug in during your comfort stop, the Clarity’s 6.6-kW on-board charger promises quicker top-ups of EV (electric vehicle) range than the opposition’s 3.3 kW, though none can handle DC (direct current) fast-charging (level 2 is the limit).

Over a mid-March week, most of our driving in the Clarity was long-distance, with four adults and luggage on-board, and yielded an overall measured consumption of a stingy 4.1 L/100 km (3.7 if you believe the trip computer). Electric range on a full charge averaged about 65 km, with extremes of 80 km (mostly urban, driving solo) and 52 km (almost all freeway, four occupants, uphill and upwind).

So, 100-per-cent-electric should be doable for most daily driving if you plug in every night (a full recharge takes 12 hours on 120 volts). It helps that the Clarity is fully driveable and usable on battery power. Just hit the Econ button and, as long as the temperature is above –10 Celsius, there’s juice in the battery, and you don’t fully flatten the throttle, the gas engine should stay out of it.

For anyone who really wants a battery-electric vehicle but is still anxious about range, this ugly-duckling Honda looks like the best compromise out there.

The prognathous face and semi-enclosed rear wheels do not a thing of beauty make. It’s all about aerodynamics (although, typically, Honda doesn’t disclose a drag figure). The rear-wheel fairing, plus slots in the back doors, helps smooth airflow.

Even the up-level Touring trim has only six-way manual driver-seat adjustment, which may be limiting for some body types, though seat comfort is fine and visibility factors are otherwise excellent. The Clarity lacks Honda’s latest “screenology,” so some minor controls are not as user-friendly as in other newer Hondas, but the push-button gear selector is intuitive to use and enables the huge storage tray below. The rear seat is a little wider than most, but legroom is bottom-of-class.

In Car and Driver tests, the Clarity strolled to 60 mph (97 km/h) in 7.7 seconds – hardly sporty, but perfectly adequate for modern traffic. Even when it’s working hard on full throttle, the gas engine is decently refined, and usually it’s barely perceptible in routine driving. Paradoxically, however, you’re occasionally aware it’s running (in battery-recharge mode) when you wouldn’t expect it, such as coasting to a stop. Engaged drivers won’t be enthralled by the Clarity’s handling, but it’s responsive enough not to unduly alienate them; still, long-distance cruising is its forte.

Despite the space occupied by a largish battery pack, Honda preserved a useful 439L of trunk space, plus extra storage under the floor. The trunk cavity is a rather lumpy shape, however, and the seats-folded pass-through is small.

Almost all the appeal of a battery-electric vehicle, but without the range anxiety. 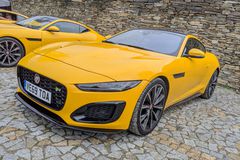 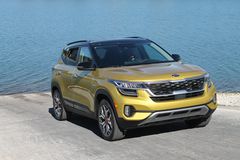 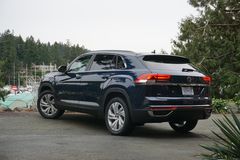