Car companies often behave like children. What one company gets, all the others suddenly need to have too.

The three big German luxury brands are notorious for this behaviour. For decades, Audi, BMW and Mercedes have been chasing each other down ever-stranger rabbit holes: fastback SUVs, four-door versions of two-door coupes, mildly sporty sub-compact crossovers. For a while, sales were booming – like somebody in product planning said ‘there are no bad ideas’ and everyone took it literally.

Which brings us to this new baby BMW. It came as a bit of a shock when engineers in Munich whipped the sheet off to reveal... what exactly? It’s called the 2 Series Gran Coupe. It exists in a niche-of-a-niche as a sub-compact entry-level fastback sedan-coupe thing. Frankenstein would’ve been impressed.

It’s called the 2 Series, but one engineer mentioned it’s roughly the same size as the 3 Series sedan from 10 years ago. Adults can fit in the back seat, which is not a given in this category. The rear door of the BMW is minuscule, but once inside there’s room for four.

The dashboard is immediately impressive. It’s stuffed with high-resolution screens which are neatly integrated into the cabin architecture and not simply stuck onto the dash like an afterthought. The Gran Coupe gets BMW’s next-gen infotainment system, which hasn’t even made its way into some of the brand’s more expensive vehicles yet.

“The target group is young urban professionals, early 30s, single or starting a family,” said Jochen Schmalholz, product manager for the new 2 Series Gran Coupe. As an entry point into the brand, it’s an important vehicle, he added.

Audi has done well in Canada with its entry-level ($33,400) A3 sedan, selling over 4,000 of them last year, according to GoodCarBadCar data. Mercedes did so well with its sub-compact ($40,300) CLA sedan, it is launching two more entry-level cars this year: the A-Class sedan and A-Class hatchback. Until now, BMW was the only one without a real competitor in this game.

2020 Audi A4 sedan and A4 Allroad: What car companies can learn from Apple

In Munich, engineers rolled out a couple of camouflaged 2 Series Gran Coupe prototypes for us to drive. They won’t arrive in Canadian dealerships until March 2020, but the engineers said the cars we drove were in the final phase of testing.

Those who expected the new baby BMW to be a frisky, tail-happy car like the rear-wheel drive 2 Series Coupe will be disappointed. Confusingly, the 2 Series Gran Coupe is based on an entirely different chassis. It has front-wheel drive, although all Canadian models will likely have all-wheel drive as standard.

Nevertheless, the new BMW handles with the crispness of a good schnitzel. The steering is lightly weighted and quick-witted. The car feels dense – like a bulldog – but it nevertheless slices into corners, resisting understeer and tracking true. That’ll be enough sportiness for most, especially if you’ve got a kid in the back seat.

(To all the diehard gearheads: don’t worry. BMW says the 2 Series coupe – one of the most entertaining, bang-for-your-buck sports cars out there – will stick around as a rear-drive model.)

Pricing has yet to be decided, but the basic 228i model is sure to be one of the most affordable cars in BMW’s lineup. The 228 horsepower engine felt sluggish mated to the eight-speed automatic gearbox, but this is a machine for price-point buyers. If you’re looking for German luxury cars with the lowest monthly payment, this car will be on your list.

There’s no issue with sluggishness in the M235i, which gets BMW’s most powerful four-cylinder engine to date. With 301 horsepower it propels the car with the sort of neck-straining acceleration you expect from the Bavarians.

The Mercedes A-Class is our current benchmark in this entry-level luxury class, mainly because of its zesty handling and incredibly high-quality cabin. BMW’s new 2 Series Gran Coupe is – to put it politely – more challenging to look at, but the cabin is easily the equal of Mercedes.

It seems strange, but it’s a smart copycat move by BMW. While the sub-compact-German-luxury-fastback-sedan is an odd niche, these vehicles do entice new buyers into luxury brands. The relatively affordable (circa $400 monthly) lease payments make sure of that.

In other words, this is one strange automotive niche that will get more crowded in the coming years.

It’s better without camouflage, but BMW’s recent designs are messy. Odd proportions don’t help. It’s tall, bulbous looking and not as sleek as its most direct competitor, the new Mercedes CLA.

It’s more spacious than it looks. I’m 5”11, but the headroom wasn’t an issue for me in the front or back. Expect to spend at least a few thousand dollars on options to make it feel like a real luxury car though.

It’s very different from the rear-drive 2 Series coupe. This is essentially a lowered X2 SUV. A clever new torque vectoring system and a limited-slip differential on the front axle make the car eager for the occasional on-ramp blast. We’ll need more seat time for a real verdict.

How this car handles Canada’s potholed roads remains an unanswered question. Adjustable suspension will be optional, but the standard springs and dampers handled Munich’s smooth roads with aplomb.

The sedan-style trunk can hold 450-litres of stuff. Plus, there’s more storage hidden under the trunk floor.

Odd, but a strong rival to the A-Class and A3. Score pending until we drive the final version. 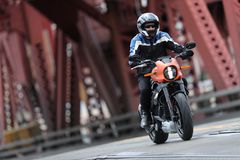 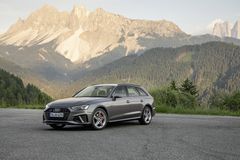 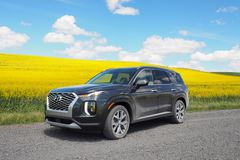