The surprise drone attack that knocked out Saudi oil installations in mid September has already nudged gas prices higher in Canada, and as the Middle-East sabre-rattling continues there may well be worse to come. So, maybe Mazda hasn’t missed the boat after all with the debut of its perpetually-postponed, but now-finally-here, first diesel engine in Canada.

Then again, the way Mazda tells it, maybe fuel economy isn’t the primary raison d’être for the CX-5 D anyway. We’ll come back to that.

Mazda first promised a diesel for North American seven years ago, and underlined its intent by racing diesel-engined Mazda6 sedans in 2013. The track cars did well, but the street version never happened. Now, the 2.2-litre diesel has finally materialized under the hood of the CX-5 compact CUV.

The new application makes sense insofar as compact CUVs dominate today’s market, while sales of mid-size sedans like the Mazda6 are in a death spiral. Then again, with the exception of pickups, most automakers seem to be redirecting their attention from diesels to electrification on the road to fuel efficiency.

Now that it’s here, the diesel is offered only in top-drawer Signature trim at $45,950. That’s $5,000 above the more-powerful Signature turbocharged gasoline version, and $13,200 more than the GS AWD non-turbo gas model which uses cylinder deactivation to save gas. Clearly Mazda isn’t pitching the diesel at buyers who simply want the overall lowest-cost mobility.

Instead, Mazda is pursuing additional sales by appealing to a new, unique customer base. “Diesel aficionados remain loyal to this type of alternative fuel and its benefits,” said Mazda in a press release, noting that among those diesel loyalists, “there remains a strong skew towards premium diesel vehicles, particularly SUVs.”

In other words, don’t peg the CX-5 Diesel as a fuel-sipping alternative to, say, a Toyota RAV4 Hybrid or a Mitsubishi Outlander PHEV. Rather, the CX-5 is an extant alternative to diesel SUVs that are no longer available from European luxury brands, which is in line with Mazda’s move to re-cast itself as a premium player.

That spin makes sense for Mazda, since it’s tough to argue a pure dollars-and-cents case for the CX-5 diesel. We measured 8.1 L/100 km over 500 km of mixed driving in mild weather. That beat its government 8.4 L/100 km combined number, but it’s not a lot better than the official 8.9 for the gas GS. We’ve achieved similar results in some gas-engined rivals. We also achieved 7.2 L/100 km in a Chevrolet Equinox Diesel (which, regrettably, is discontinued for 2020).

So if you’re not going to save a bundle or save the climate, what’s the point? Well, some of us just plain enjoy diesels – their effortless, low-revving power delivery has a certain appeal, as does the comforting James-Earl-Jones “gravel” of their vocals.

Why this particular diesel? The easy answer is that it’s pretty much the only one left that isn’t a pickup truck. As for the premium pretentions, the CX-5 arguably looks the part, and follows through with a polished execution of the interior trim and amenities.

Dynamically, however, it’s not quite a slam dunk. It handles very competently, with solid, linear steering and taut body control, combined with a good sporting ride. But it doesn’t drive with the verve of the old “zoom-zoom” Mazdas. Nor does the driving experience really stand out from some mainstream alternatives.

The 2017 redo gave the CX-5 a chunky solid new look, though it’s your call how “premium” it looks. The Signature trim includes 19-inch wheels but the only visual cues to its diesel-ness are a chrome single-outlet tailpipe and SKYACTIV-D tailgate badge.

Classy interior trim helps justify the “premium” pitch, with cocoa nappa leather seats (heated and ventilated up front) and real Abachi timber accents. At-the-wheel adjustability and visibility are satisfactory and physical HVAC controls are welcome (though rather low on the dash). However the audio is overly reliant on the small display screen interfaced by a BMW-like twist/toggle/tap rotary controller (the display is not a touch-screen). Interior space dimensions are average for the class, though, subjectively, rear-seat legroom seems modest.

Motor Trend track-tested the CX5-D and measured 0-60-mph (0-97 km/h) in 9.0 seconds, which is respectable for a CUV and not far behind the non-turbo gas CX-5. Like most diesels, the rich supply of torque (290 lb.-ft.) makes it feel quicker in real-world driving than the track number suggests, accompanied by engine acoustics that are recognizably diesel in quality but inoffensive in volume. The six-speed automatic is slick, though its ratio count is low by today’s standards; almost 2,500 rpm at 120 km/h in top seems rather busy for a diesel.

Cargo-volume stats are a little below average, but it looks competitive, and it’s usable: the rear deck is low, the back seat is 40/20/40 split, and the seat-backs fold nearly flat, with only a small step up from the trunk.

If your heart is set on a diesel, the CX-5 provides it in a practical and pleasing compact crossover package with unexpected towing capability. If you just want the best fuel efficiency in a compact crossover, a hybrid is a more cost-effective alternative. 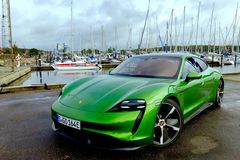 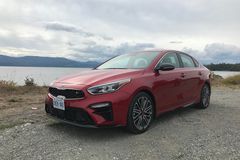 Car Review
The 2020 Land Rover Discovery Sport has all the bells and whistles, but I’ll reserve judgment on performance 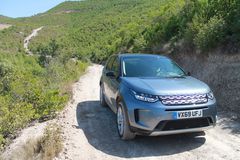