As others strive for weight reduction and cornering ability, Dodge, with its Challenger muscle car, forges straight ahead with gargantuan amounts of horsepower, torque and a quarter-mile record for a production car.

There’s no meekness within Dodge and that’s what has made the Challenger one of the boldest offerings in the business. The brand does exactly what it sets out to do: be the strongest, largest, meanest and coolest-looking car at the track, bar none. Vigorous horsepower ratings and aggressive nameplates such as Hellcat and Demon back that statement up with numbers now reaching 717, 797 and 840.

But if that wasn't enough, Dodge for 2019 has made additions to its lineup including a Widebody version for its R/T Scat Pack 392, a non-widebody R/T Scat Pack 1320 geared for drag racing, an SRT Hellcat featuring a new dual-snorkel hood and finally, the SRT Hellcat Redeye.

The Hellcat Redeye is the centrepiece, taking parts from both the limited-edition Demon and regular Hellcat to deliver 797 hp and 707 lb-ft of torque. The demonic spawn of those Challengers is good for a 0-96 km/h sprint in 3.4 seconds, a quarter-mile time of 10.8 seconds at 210 km/h and a top speed of 326 km/h.

As competition from the Chevrolet Camaro and Ford Mustang gets stronger from a horsepower-to-weight ratio, Chris Wincek, senior manager of Dodge/SRT brand marketing, FCA North America, explains how Dodge embraces being different while playing to its strengths.

“Knowing our customers in this segment, we understand there's a bit of bragging rights to go with it – it's a horsepower war. With the new additions to Challenger, we feel that the brand has answered that market demand for more straight-line speed, acceleration and raw horsepower.”

The Challenger’s niche positioning was on display in a program that had us driving the new for 2019 Hellcat Redeye and the Scat Pack 392 Widebody to and from Portland, Maine, and the Club Motorsports race track in Tamworth, N.H. It created an opportunity to put together all of the Challenger’s major attributes as an iconic 1970s-inspired styling masterpiece, a straight-line track star and as a functional daily driver with five seats.

During the street drive, the Hellcat Redeye showed off its smooth driving abilities and comfort, while still retaining a constant rumble on throttle application in the front and roar in the back from its black chrome dual exhaust tips, almost begging the driver to show what it’s made of. That’s why the the day, much like the muscle car’s focus, truly belonged to the track.

That’s where its supercharged V-8 power, derived from its 6.2-litre Hemi engine, could be released, especially during the long straightaways. After powering down, a rush goes straight through your body, but the realization that you’re carrying in excess of 2,000-kilograms of bulk quickly flicks into the mind while approaching the next corner. To rectify some of the Challenger’s previous cornering deficiencies, Dodge has introduced an optional Widebody also found on the Demon and Hellcat to improve grip and cornering ability. It surely helped, but it still doesn’t instill the amount of confidence needed to truly attack those corners with gusto.

The Widebody, available for additional $8,000, has fender flares that expand 3.5-inches in width, allowing for 20x11-inch wheels and 305-series Pirelli P-Zero tires to be put on. Those additions, coupled with a Brembo braking system featuring six-piston front calipers and a new set of brake ducts, gripped the track as desired, braking responsively, maintaining momentum out of the sharp corners and keeping the Challenger from losing its back end.

The Redeye starts at a hefty $93,695 price tag, but unlike other Challengers it only comes mated to an eight-speed automatic transmission. Three-peddlers may disapprove, but having an automatic was fine by me given its seamless shifting ability combined with the technical and frequent gradient changes on this particular track.

Dodge also wanted that optional Widebody excitement to trickle down to the more reasonably-priced Scat Pack 392 (starting at $50,945). Its 6.4-litre Hemi SRT V-8 only churns 485 horses and 475 lb-ft of torque, but it might just be a better car for the track. While the Redeye was always power hungry and in need of more braking, the 392 stayed composed and fluid when navigating each turn, placing the driver fully in control.

Both the Redeye and Scat Pack 392 Widebody may not be for everyone, nor will they set the best lap times, but they sure make a statement from its grumble to its size to its peak numbers. And that's Dodge playing up to its power-hungry base looking for bragging rights. As Wincek points out, “it's a muscle car after all and we're not changing that formula.”

Dodge is cognizant of improving itself on track, and its Widebody possesses the driving dynamics adjustment needed to make these Challengers more competitive on track. It's just a quieter component that gets drowned out by its 797 horses. Dodge gets it, and they're not letting up. Let the horsepower war rage on!

The Challenger is one of the last timeless designs that stays true to its muscular look and composition dating back to the late sixties and seventies. Aesthetically, it’s hard to distinguish a Hellcat from a Hellcat Redeye, except for its low-gloss black logo situated on its side featuring a hidden red jewel within (the regular Hellcat has a silver badge). New for 2019, is a dual-snorkel hood that brings maximum air intake and optimal performance to the Redeye’s engine. The Widebody optional on both gives it some extra curb appeal with extended flares.

The Challenger beats the Camaro and Mustang when it comes to interior space and second-row occupancy. There’s not a crazy amount of space, but passengers can at least be transported with pains only occurring on entry and exit. Up front, there’s nothing overly exciting about the Hellcat Redeye, as the SRT logos throughout don’t inspire the same excitement as its exterior. Bolstered leather seating is comfortable, especially for long drives.

The Challenger’s strong suit comes down to performance. The Hellcat Redeye clocks in at 43 hp less than the Demon, but it possesses enough of its DNA including an upgraded torque converter and launch control for it to achieve that unique and powerful grunt and acceleration. With 80 more hp than the regular Hellcat, it’s able to top its speed by a 10th of a second and reach a higher top speed by 13 km/h (326 km/h) with the bonus of only needed 91 octane fuel. However on track, the Scat Pack 392 Widebody may be your car of choice because of its handling skills, lighter price tag and manual transmission offering.

Dodge allows the technology of the engine, suspension and aerodynamics to do the talking, as they keep advanced safety technology mostly optional. Perhaps, it’s as a way of keeping it a traditional muscle car? Both the Scat Pack and Redeye have 8.4-inch Uconnect touch screens that are colourful, responsive and easy-to-use with Apple CarPlay and Android Auto connectivity. Occupants will be pleased by heated and ventilated front seats and a heated steering wheel as standard equipment from the Scat Pack 392 up.

For a two-door, the Challenger has plenty of room on road trips to store two to three sets of luggage. In total, there’s 459 litres of storage space.

The Challenger has become the epitome of what a muscular car is and always has been. Horsepower and torque numbers used to be substantial once it hit the 500s, but Dodge has made that seem like chump change with the 840-hp Demon, and now doubling down on its 797-hp spawn known as the Hellcat Redeye. If muscle cars and races were based solely on horsepower and torque, the Challenger would win hands down. Clearly there are other attributes, and Dodge is slowly improving in those areas, as well as excelling as a grand tourer when off the track. 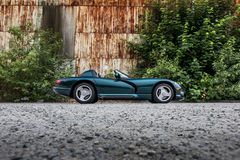 Car Review
Review: The 2018 Dodge Challenger Hellcat is a sledgehammer on wheels
June 27, 2018 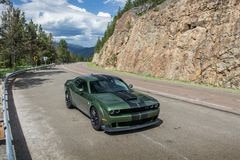