Greek roads can be hard on a car. The smooth tarmac can turn rough just past the next blind corner – and there are plenty of blind corners. When you’re in a car like the Porsche 911, chances are you’re travelling pretty quick and heading into that corner at full chat. Surprises can be a challenge. This is the new 911, however, and my open-topped Carrera 4S test car was fitted with the optional sport chassis that wasn’t available in the previous generation cabriolet.

A stiff chassis is essential for good handling with any car, but it’s a greater challenge for a convertible – the coupe version is usually three times more rigid. Think of trying to twist a shoebox: it’s strong with the lid in place, but flimsy when the lid is removed. Take the roof off a car and it’s the same thing.

“In the old system, we had to wait until the wheel travel came to a stop before we could change the damping – the speed of the damper had to be zero,” says August Achleitner, Porsche’s vice-president responsible for the 911 and its 718 Boxster/Cayman sibling. “I would have liked a stiffer chassis layout, but we were not courageous enough to offer the sport chassis – we would get small ‘force peaks’ into the body that, after the first 10,000 miles, would affect the quality of the body.

“But with the new system, we can change the damping continuously. The new car does not transmit the harshness of the road surface as much as it did before. It adapts constantly, and it calculates more than a hundred times a second.”

To compensate for the super-sporty 911 Cabriolet, Porsche uses a high-strength aluminum portal frame for a roll bar behind the rear seats, which helps prevent flexing of the body. It also fits additional strengthening materials into the A-pillars that hold the windshield in place, so they’re roughly twice as strong as the pillars in the coupe.

Of course, I was thinking of none of this as I swooped through corner after corner here in Greece, just two days after the eighth generation of the convertible 911 debuted at the Geneva Motor Show. The top was down, and although there’s a very effective wind-deflector screen at the back that pops in or out in two seconds with the touch of a button, I kept it retracted with the side windows down, for extra breeze.

Few drivers would notice a difference between the convertible and the coupe, especially off a racetrack. Porsche went to great lengths to improve the dynamic stiffness of the Cabriolet through testing on rollers and out on the road, not just the torsional stiffness of the chassis and its various components. As such, there’s no disappointment in the handling of the convertible on the road; its response and driver feedback are what 911 drivers have come to expect.

I wasn’t thinking about the 70 kilograms of extra weight that the soft-top roof creates, thanks to its heavier fabric, electric motor and magnesium and aluminum frame. I wasn’t even thinking of the extra power of the flat-six engine, or its redesigned twin turbochargers, or its new eight-speed dual-clutch transmission that shifts faster than a video game.

I was thinking about how wonderful it is to drive an open car on the open road when the temperature is 20 degrees and there’s not a cloud in the Aegean sky. It’s taken an extra few months for the rollout of the Cabriolet after the new coupe – which is all about marketing, as the two were developed simultaneously – and there’s always the danger that the maker will forget something and mess it up.

Roughly one-third of 911s sold is a convertible – although it’s one in four in cooler Canada – and it’s crucial with such an iconic car that Porsche get it right. On the curving coast road out of Athens, heading to the ancient Temple of Poseidon, the 911 Cabriolet got it very right indeed.

Porsche couldn’t do anything too radical with the design of the new 911 or its vocal fan base would be up in arms. The most obvious change is at the rear, where a single red light strip wraps around the back of the car, just below the automatic spoiler.

When the Cabriolet’s roof is raised, the shape of the car is almost identical to the coupe, with the same drag coefficient of .30. When the roof is lowered (which takes just 12 seconds and can be done while driving at up to at least 50 kilometres an hour), it’s tucked into place in four folding panels behind the rear seats in a smooth extension of the rear engine compartment. Very classy.

The inside of the cabin is crucial for any self-respecting convertible because so many people can now see in. It looks harmonious but is also practical, with a large 10.9-inch digital display panel filling the centre dash area and a five-gauge display behind the wheel. Only the centre tachometer is an analogue gauge – the others are purely digital and can be customized as you like.

Beneath the centre display are five switches designed to look like the five toggle switches of the original 911 from the 1960s. On the traditional left of the steering wheel is a rotary switch in place of the key, which can be kept in your pocket.

The car’s come a long way in its half-century of production. In the original, which was much narrower, the steering column and the pedal layout was actually 40 millimetres to the right of the centre of the driver’s seat; it’s only recently that the steering wheel could even be adjusted up and down. There are none of those vagaries with the modern car, despite the homage of the shape and the switches.

A less powerful base Carrera will be next to come on sale after this initial release of the mid-powered S models, and then the stonking Turbos will roll out in probably a year from now. Seven-speed manual transmissions will also be offered later. There are now 25 different variants of the seventh-generation 911, and there are likely to be just as many of the eighth.

Porsche forgot nothing in the catch-up of technology. Everything from the wireless phone charging (and removal of the rear-mounted satellite radio antenna) to the driver’s assistance features are upgraded and up to date.

The headlights are one of the smartest features. The standard lights are LED, but the optional PDLS Plus lights use a matrix of 84 separate LEDs that are constantly monitored to change their pattern without physically moving. They cannot dazzle oncoming drivers because the beam of light that would shine into that driver’s eyes is shut down or dimmed, and they adjust for better illumination while cornering. They’re not available for U.S.-bound cars, however, because their changing patterns are not yet legal there.

The wet mode sensors are also cutting-edge. Small microphones in the front wheel wells detect the unique sound of splashing water and the computer adjusts the traction control automatically to compensate. If it gets really wet, the driver can be alerted to switch on Wet Mode, which flattens the throttle response and activates the rear spoiler for maximum downforce. Of course, this extra alert is probably unnecessary if the roof is down.

There’s no difference in cargo area between the coupe and convertible because the trunk is in the front – the roof folds down into a space in front of the rear-mounted engine. The rear passenger seats of the 2+2 are still ridiculous and nobody will ever sit back there unless they’re in a baby carrier or have no legs, but 911 drivers wouldn’t have it any other way.

An exceptional car, rewarding to drive and just to sit in. It would have been so easy for Porsche to make a misstep when redesigning such a beloved car, but every change is an improvement. Remarkable. 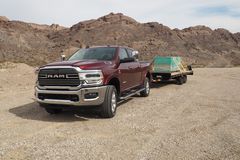