Clearly, the modern automobile is too refined, too civilized, too comfortable, too … bland? How else to explain the rapturous reception for the reincarnated Ford Bronco and the proliferation of off-road-focused versions of other SUVs and pickups.

Sure, most owners of these rugged backcountry pioneers will never tackle any terrain tougher than a lumpy cottage trail, but hey, you could if you wanted to.

It’s easy to forget in the midst of this mania that 30-odd years ago – before SUVs were domesticated into family-duty substitutes for a minivan – going off-road was the primary reason for pretty much all SUVs. And the best-selling SUV in America was also for a while the smallest one; in 1987, the tiny Suzuki Samurai outsold the Jeep Wrangler.

Suzuki is now long-gone from North America, and while varying degrees of off-roadiness are available in compact and larger crossovers, nothing has replicated the Samurai at the toy-sized end of the segment.

The one that comes closest is the Jeep Renegade. This baby Jeep is one of the smallest among today’s breed of subcompact crossovers, and like all Jeeps, it’s available in a trail-rated Trailhawk guise. The off-road specs and hardware don’t go as far as in some larger Jeeps (or the old Suzukis), but they go farther than any of its peers.

The Renegade Trailhawk’s ride height is a class-leading 8.7 inches, and its approach and departure angles (30.5 and 34.3, respectively) ramp it up versus both its siblings and other crossovers. Standard kit includes all-terrain Falken tires (including a full-size spare), underbody protection, hill-descent control and a Rock mode added to the Auto, Snow, Sand and Mud Selec-Terrain modes already standard on 4x4 Renegades.

In addition to a 4WD Lock (also standard on all 4x4 Renegades), the Trailhawk has a button labelled “4WD Low.” However, this isn’t a two-speed transfer case. Instead, Jeep combined the wide ratio spread of the standard 9-speed automatic with a shorter final drive ratio unique to the Trailhawk to achieve a 21:1 first-gear “crawl” ratio; that’s lower than the 15:1 – 17:1 range typical of conventional crossovers, though still a far cry from, say, the 77:1 of a Wrangler Rubicon.

The 4WD Low setting ensures the vehicle starts in first gear (otherwise Renegades usually start in second) and holds there for longer – or locks it in first, when Selec-Terrain is in Rock mode. The much shorter final drive probably doesn’t compromise highway cruising, as the Trailhawk is more likely to use ninth gear – something other Renegades rarely do.

On 2020 models, a 1.3-litre turbo engine is standard on the Trailhawk and on the top two trims in a seven-model lineup; for 2021 the lineup is simplified to three trims, of which only the Trailhawk has the 1.3. Other trims have a 2.4-litre non-turbo.

Frankly, it’s hard to see the advantages of the 1.3, other than to offset the greater weight and blunter aerodynamics of the Trailhawk package. (Fuel consumption of the 1.3-litre Trailhawk is about the same as a 2.4-litre non-Trailhawk 4x4.) On paper, the 1.3 has more low-end torque, though only when the boost is up, and it’s unrefined by today’s standards, whereas the 2.4 is one of the smoothest fours in the business.

Our brief time with the Renegade in the Greater Toronto Area didn’t allow for any bush-bashing, but given all its off-road-focused equipment and features, it’s a given that the Trailhawk is capable of going where no other mini crossovers dare to go. I feel doubly confident saying that, having previously experienced the off-road chops of the Jeep Compass Trailhawk, which packages the same hardware as Renegade into a slightly larger (and therefore marginally less agile) body.

As an off-roader, the Renegade Trailhawk is no poor man’s Wrangler. Nor is it as refined or engaging to drive on pavement as most other mini crossovers. But if your lifestyle or your budget could use a small crossover that meets in the middle, there’s nothing else quite like it.

We might call it dorky, you might call it cute, but nobody would call it “meh.” Perhaps the French say it best with their expression “jolie-laide.” Apart from its slightly higher ride height, the Trailhawk is distinguished by red tow hooks, unique fascias and specific 17-inch wheels with on/off-road tires.

With (optional) eight-way seat adjustment, most body shapes should be able to get comfortable at the wheel, though stout A-posts compromise visibility, and the distant cowl and expansive dash-top seem out of place in a boxy off-road vehicle. On the dash itself, you get clear gauges and plenty of actual buttons to supplement the integrated 8.4-inch touch screen, though the low-set HVAC buttons are a long glance away from the road, and oddments stash space is at a premium. For rear-seat riders, most peers provide more knee room, but headroom is best in class, and the bench is wider than most.

Once you’re rolling and it’s on boost, the little engine can punt the Renegade along quite effectively, for example when getting up to freeway-merge speed. But turbo lag is noticeable at launch – not just in test-track mode (we measured 0-100-km/h in 9.8 seconds), but also in routine driving. The lag-then-lunge power delivery combined with an at-times indecisive transmission can provoke herky-jerky progress in stop-go traffic. It calms down nicely on the highway, though – about 2,000 rpm at 120 km/h in ninth, or 2,400 in eighth. Given its height, weight and squishy all-terrain tires, the Trailhawk’s handling is hardly athletic, but it’s tolerable. And like a true off-roader, ride quality that seems rather fidgety on good pavement becomes relatively more and more absorbent the worse the surface gets.

A seven-inch touch screen is standard on the 2020 Trailhawk, including CarPlay, Android Auto and SiriusXM, while a $995 package ups the screen to 8.4 inches with Navigation, HD Radio, plus SiriusXM Traffic and Travel Link. A separate $800 package provides blind-spot monitoring and rear cross-path detection. Depending on the model year and trim grade, more advanced driver-assist options such as automatic emergency braking, lane-keep assist and adaptive cruise control are also on the menu.

The Renegade is stubby, even for a subcompact, so it’s not the segment’s roomiest freighter. That said, on lower trims with a spare-tire kit, the seats-up cargo volume of 21.2 cu. ft. is more competitive than the official 18.5 cu. ft. based on a full-size spare. And the seats-folded cargo volume of 50.8 cu. ft. is a little above average. With the optional Class III receiver, this tiddler can tow up to 2,000 lbs., equal-best in a segment where most rivals aren’t rated to tow. 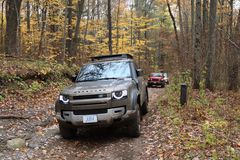 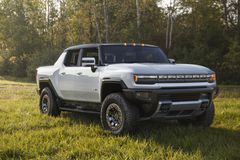 Car Review
The 2020 Jeep Wrangler is still an unmatched drive, even if it’s a bit miscast as a family car
Subscriber content
October 30, 2020 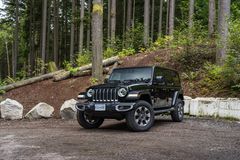