Driving peacefully along a quiet side road just east of the GM Canada headquarters in Oshawa, Ont., I encounter the Railway Crossing from Hell.

The paired CN tracks not only slash across the road diagonally, they’re also on a slight curve. Plus, one track is higher than the other. In any vehicle, the random surface turbulence is like a real-world, everyday Ultimate Challenge of suspension comfort and control.

It’s also a challenge that a 2020-or-older Chevrolet Tahoe or Suburban would have utterly failed.

Traversing that crossing in a 2021 Tahoe, instead, confirms the single greatest advance GM has achieved with its all-new full-size SUVs (a lineup that also includes the Chevy Suburban, GMC Yukon/XL and Cadillac Escalade/ESV). Finally, 18 years after archrival Ford’s Expedition got it, the Tahoe and its siblings have independent rear suspension.

Beyond that, GM has leapfrogged the competition with available Air Ride Adaptive Suspension – basically air springs on all four corners that provide automatic load-leveling, and up to four inches (102 mm) of ride-height adjustment. Combined with GM’s excellent Magnetic Ride Control option, the Tahoe can have a chassis worthy of a limousine.

Binning the previous Iron Age beam axle didn’t only transform the Tahoe’s ride comfort and composure. It also helped (along with a six-inch longer body) liberate a wide-open prairie’s worth of additional space. The third-row seat is now actually usable by grown-ups, and with 66 per cent more space for their stuff behind them.

If the new rear suspension is a slam dunk, the news is mixed about the other transformation that should have been at the top of GM’s to-do list: reduce fuel consumption. Despite installing Dynamic Fuel Management on the 5.3-litre and 6.2-litre V8s and making the 10-speed automatic across the board, the trucks' increased size and content has wiped out any potential reductions in gas consumption.

The silver lining is that the GM trucks will offer a segment-first diesel engine later this year. The inline six-cylinder 3.0-litre turbodiesel is rated at 277 horsepower (78 fewer than the 5.3 V8), but its thumping 460 lb.-ft. of torque matches that of the 6.2-litre V8. Fuel consumption numbers aren’t finalized yet, but judging by the Tahoe’s mechanically similar Silverado pickup sibling, the diesel (with 4WD) should consume about 25-per-cent less fuel than the 5.3 gas V8 and 31-per-cent less than the 6.2.

Those are meaningful differences. But as a return on investment, if the diesel option costs about the same as on the Silverado – almost $7,000 – it could take years to pay for itself. And if you see the diesel as an environmental “free pass,” remember that diesel fuel contains more carbon than gasoline. According to Canada’s official Fuel Consumption Guide, the diesel consumes 25-per-cent less fuel than the 5.3 V8, but outputs only 15-per-cent less CO2.

Gas-engined 2021 models are on sale now. When the diesel arrives later this year, it will be available on five of the six trims – LS, LT, RST, Premier and High Country – the exception being the off-road-focused Z71. All-wheel drive will be optional on LS and LT, standard on the rest.

Very few of us really need a full-size SUV, but if you do – or if want one more than you want to save the world from climate change – GM’s new lineup is back in the game in a big way.

The old Tahoe’s third row was tolerable for adults for about as long as the average hockey penalty. The 2021 transformation adds enough shareable legroom (the second-row seats slide fore-aft) to accommodate adults in all three rows. Those sitting outboard in the three-person third row will still be somewhat knees-up, unless they stretch a leg or two into the space between the second-row buckets (not possible if the no-cost option three-person second-row bench is installed).

Up front, the range of seat adjustment enables a proper tall-in-the-saddle posture for the driver, facing a well-stocked gauge cluster in which, however, the fuel gauge is somewhat lost among the matching small dials for oil pressure, water temperature and battery volts.

A free-standing 10-inch central touch screen is supplementary to an ample array of hard controls for HVAC and radio. Another set of buttons on the dashboard acts as transmission selector, leaving space on the centre console for storage and side-by-side cupholders (so you won’t mistake your coffee cup for your passenger’s). A unique feature is a centre-armrest box that can power-slide up to 10 inches rearwards, thus opening up a storage area between the front seats, and bringing the rear HVAC controls closer to second-row passengers.

The 5.3-litre V8, standard in all trims except the High Country, generates 355 horsepower and propels the Tahoe from 0-100 km/h in eight seconds. The engine gets the job done, albeit without much V8 ear candy nor much compensatory refinement; it’s at its best on the highway, where the seamless 10-speed automatic serves up 120 km/h at a barely-above-idle 1,600 rpm. Wearing our gearhead hat, we had hoped the steering would be crisper, like on the mechanically similar pickups, but perhaps it was dumbed down by the all-terrain tires on my Z71 test vehicle. Even so, while the Z71 won’t goad gearheads into inappropriate driving behaviour, the smooth and light steering and sophisticated chassis let you manoeuvre the Tahoe with disarming ease in routine driving. And you no longer have to worry it’ll all go sideways if the pavement turns choppy in mid-corner.

Beyond a generous complement of infotainment, connectivity (including WiFi hotspot) and assisted-drive features, the Tahoe/Suburban family claims a couple of segment firsts: a 15-inch (i.e. huge) head-up display; and an available rear-seat media package with dual 12.6-inch LCD touch screens. On the latter, you can watch different content on each side, share content or send navigation POI to the main screen up front (Yo Mom! There’s a Harvey’s three kilometres ahead on the right.). 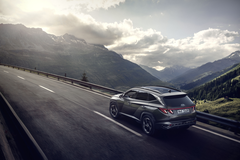 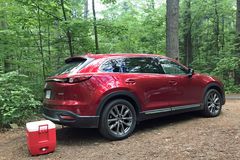