Most of the legends swirling around samurai swords are largely untrue. They aren’t really any stronger or sharper than a regular sword. If you drop a silk scarf on the edge of the blade, it will not simply split into two. Yes, the blade is often folded during the forging process, but the process is largely ceremonial at this point. However, it is true that feudal Japanese swordsmiths once folded and beat their blades again and again, chasing perfection. The tamahagane steel required considerable working to remove impurities and create a katana free of weak points. Lexus has attempted to do the same thing with the refreshed IS350 sport sedan.

Exterior styling elements have been polished, but much of the underpinnings of the IS remain the same. The unibody has been strengthened with additional welds, and weight has dropped slightly, thanks to components such as aluminum control arms. However, the V6 engine and the six-speed automatic transmission are both carryovers.

The reason is simple economics. In Canada this year, Lexus sold five times as many NX crossovers as it did IS sedans. The situation is much the same globally, so investing in an all-new platform for the IS was clearly not in the cards.

Yet this fine-tuning approach combines with a very high level of build quality to help the IS still feel competitive in its class. The chassis is sharpened by its changes, and a new wider track and wider tires means there’s a little more grip on offer. The improvements are incremental, but they add up.

What could use a bit more finesse is the steering feel and the transmission. Rear-wheel-drive models get an eight-speed automatic, but the IS range is almost entirely all-wheel drive in Canada. The six-speed could stand to shift a little more snappily, and a bit more feedback from the steering wheel would add confidence and fun. The 3.5-litre V6 produces 311 hp and 280 lb-ft of torque and is as smooth as silk on steel. It does not, however, provide the kind of robust low-end torque that turbocharged or electrified rivals offer. Winding this engine out on the open road is enjoyable, but it could use a bit more initial grunt for responsiveness.

Happily, the improvements to the technology of the IS are more of a leap than the mechanical bits. Lexus has been sorting out its somewhat frustrating controls for some time now, and the IS gets a new 10.3-inch touch screen that’s closer to the driver. There’s still a touchpad located just by the shifter, and between the two, navigating though the infotainment system is much easier than in earlier models. Apple CarPlay and Android Auto are also standard.

The reworked controls make the interior of the IS much more livable day-to-day, although it is still smaller inside than most of its rivals. Further, some drivers will find the seats a little narrow. If you fit comfortably, the overall fit and finish here is excellent.

Add in comfortable ride quality and a relatively quiet cabin, and the reworked IS is just improved enough to be compelling in its segment. Lexus hasn’t created a new sports sedan here, but it has sharpened things up considerably. It’s sufficient, for now, but the IS will soon need reforging to give it more of an edge.

Somewhat controversial when it first came out, the angularity of the IS350′s design has aged well. This new version integrates the front headlights in a more cohesive look and gets accented rear bodywork. Overall, it looks great, especially with the optional 19-inch wheels, and is distinctly Japanese in design.

A real advantage for the IS is in the quality feel of its interior. The seats especially are well crafted, but everything from the air vents to the various knobs and buttons are well executed. Again, the cabin is a bit smaller than rivals, but assuming you fit, it’s very comfortable.

Even if the IS isn’t quite the pinnacle of sedan performance, Lexus is pushing its F-Sport line of visual upgrades across most of the range. Sport-look features such as 19-inch wheels and a rear spoiler will be available as upgrades on most AWD-equipped models.

One oft-overlooked feature is the quality of a vehicle’s stereo. In the case of the Lexus, the pinnacle of audio quality can be found with the 17-speaker Mark Levinson stereo, which is only available in the IS range as an option on the IS300 AWD. The regular stereo in the IS is very good, but having sampled the Levinson option in other Lexus products, any audiophile should strongly consider the upgrade.

The IS350 has just under 306 litres of trunk space, which is a little lower than most of the vehicles in its class.

Sharp-looking and finely crafted, but needs more of an edge against sport-sedan rivals.

Car Review
The 2021 Acura TLX successfully gets the automaker back to its performance roots
December 1, 2020 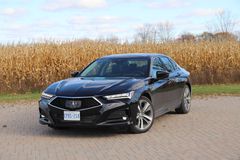 Acura unveils redesigned MDX as it tries to reclaim an SUV segment it pioneered
October 14, 2020 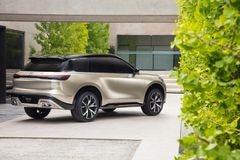