There was a time when small cars were, as a rule, miserable. Their purpose was essentially to get a driver to and from a job so he or she could eventually afford a bigger car. Small cars were an entrée into the rat race, more of a necessity than a prize.

Even for celebrated small cars like the original Volkswagen Beetle and 1960s Mini, their primary virtue was that they were extraordinarily cheap. And, that alone was enough to sell millions and millions of underpowered sub-compact rust buckets.

For decades, the notion of a small luxury car was almost an oxymoron, especially here in North America. But, not anymore. Dense city centres, impossible-to-find parking, and a need for automakers to meet corporate average fuel economy targets mean that Mercedes-Benz and its rivals now have a vast array of little luxury cars they would like to sell you. (Or, more likely, lease to you.)

Enter the all-new 2021 Mercedes-Benz GLA, the smallest SUV with a three-pointed Mercedes star on its grille. On such a diminutive vehicle, the star shines extra bright.

The new GLA could be yours for $42,400, plus tax and fees, assuming you don’t want to add the optional $1,700 Sport Package or $2,200 Night Package or cool-looking but costly 20-inch alloy wheels and metallic paint, which you probably do. With a few options added and $2,000 down, your monthly lease payment would be around $550 for 36 months. Not cheap, but it’s cheap enough to tempt new buyers into a Benz.

The GLA joins four compact Mercedes-Benz vehicles already in showrooms, including the A-Class sedan and hatchback, CLA sedan and seven-seat GLB SUV. So, that’s five entry-level Benzes in showrooms now, which is a lot. Too many choices? Yes, probably; we’d be surprise if they were all still available in seven or even five years’ time.

“Really, the market is dictated by customers, so if they keep asking for compact SUVs, we’re here to make them,” said Cullen Lee, product manager at Mercedes-Benz Canada. “The GLA is definitely a vehicle that attracts a lot of new customers to Mercedes.”

The GLA also attracts many existing Mercedes customers who trade up to an SUV from cars like the A-Class or CLA, he added. “It has a lot more functionality,” he explained of the GLA. It’s also popular with fleet customers and as a rental car, another company spokesperson said.

Given that the Mercedes A-Class hatchback is probably the best small luxury car on the market, you may have been hoping the GLA would be an A-Class on stilts: more ground clearance, more suspension travel, and some rugged-looking body cladding. Think: A-Class Cross Country. That’s what we were hoping for anyway, but, alas, the new GLA is not that.

What we have here is a triumph of function over form. Compared to the previous GLA, the new model is shorter in length but taller, wider and much more practical than its predecessor. It’s frumpier-looking due to those squished proportions, but it has noticeably more headroom and space for rear passengers. It doesn’t feel claustrophobic from the driver’s seat at all.

The ride is comfortable too, with the caveat – for a small SUV – but even the AMG GLA 35 model with its adjustable suspension is reasonably compliant over bumps and ruts. The harsh ride was a major drawback of previous GLAs, but not anymore.

Compared to rivals, the impressive MBUX infotainment system with dual-screen display trumps most of its peers. That high-tech cabin – plus the can’t-miss-it star on the grille – are ultimately the GLA’s greatest selling-points.

Which little Mercedes is right for you? If you prefer not to bend down to get into a vehicle, or if you frequently need to install or remove a child seat, the GLA is surely a better choice than the A-Class or CLA. You sit higher in the GLA too. The drawback is that it’s not as fun or engaging to drive; the steering is quick but numb. It doesn’t look as sleek either. But, for most people, that’s okay; the added practicality and ease of ingress in the GLA is a worthy trade off. The GLB SUV is only $1,500 more expensive but even more versatile, offering (cramped) third-row seating.

All of these machines are indicative of the current crop of small luxury vehicles. They’re the opposite of miserable, packed with high-end features, the latest tech and strong engines. It’s why luxe little SUVs like this have quickly become ubiquitous, clogging condo parking garages and jostling in traffic. But, beware: while the GLA and its ilk may be small, they’re not cheap, and the temptation to move up to something bigger and better still lingers.

It’s hard to make little SUVs look good. Their squished proportions give them vaguely egg-shaped silhouettes. The GLA looks clean, but is unlikely to turn heads.

The design is a bit more cluttered than in the A-Class or CLA, but this is among the best cabins in the small SUV class.

The MBUX infotainment systems is crisp and responsive. The haptic touchpad interface is less distracting than touchscreen-only systems. Automatic emergency braking is standard, but adaptive cruise is an option.

The rear seats can slide fore and aft, depending on whether you need to prioritize passenger comfort or cargo space.

A practical luxury SUV you can park anywhere 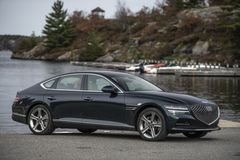 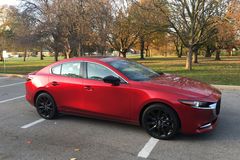 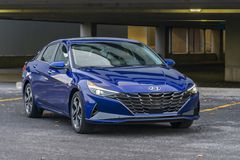