A pair of sturdy hiking shoes. A Gore-Tex jacket. A brightly printed truckerʼs hat. A dog, preferably damp and muddy. And a Subaru Crosstrek. If you live in the Pacific Northwest, all these things are considered essential for a life lived outdoors.

Subaru manages the brandʼs outdoorsy lifestyle image very carefully, but in the case of the Crosstrek, the reputation is actually earned. More than a quarter of all Subaru sales in Canada are of this cute-but-rugged crossover, and the odds are youʼre bound to run into at least three of them at any given trailhead or campsite.

As the Crosstrek is already so popular, Subaru isnʼt looking to rock the kayak much with this updated model. The improvements are incremental rather than revolutionary. The basic recipe remains the same: Take one Impreza Hatchback, raise it up by 90 millimetres, add some tough-looking plastic body cladding and watch the polar-fleece crowd coming streaming into showrooms.

The headline this year is the additional power under the Crosstrekʼs hood. New for 2021, the Outdoor and Limited trims get a 2.5-litre hoizontally-opposed four-cylinder engine thatʼs shared with the larger Forester. All-wheel drive remains standard on all models, and thereʼs still a six-speed manual available – but only with the smaller 2.0-litre engine. Equipped with a continuously variable transmission (CVT), this Outdoor model now offers 182 horsepower, a 30-hp increase over Crosstreks with the 2.0-litre engine. The power bump feels more modest than it sounds, but on the winding Sea-to-Sky Highway north of Vancouver, it did provide much-improved acceleration for passing. Handling is less agile than the lower-to-the-ground Impreza, but the Crosstrek is still easy to drive. Itʼs a small enough vehicle to still feel nimble.

In fact, thereʼs still an argument to be made here that a Crosstrek with the powerful engine out of the Subaru WRX would be good fun. However, Subaru enthusiasts have been asking for one for ages to no avail, so no one should hold their breath for a turbocharged Crosstrek any time soon.

With one possible exception. I stopped in at Rocket Rally, a specialist racing shop based in Squamish, B.C., run by hard-charging Canadian rallying legend Patrick Richard, to have a look at its Competition Crosstrek. This beast gets a stripped interior with full roll cage, a sequential gearbox and a 350-horsepower turbocharged engine. Unfortunately, swapping in all the rally gear just might affect your warranty, and Iʼm not sure the dog would have any place to sit, what with that roll cage.

More important is what the success of the Competition Crosstrek says about the regular Crosstrekʼs basic architecture. This is a tough little car, and as I headed out onto the forest service roads around Squamish, it proved worthy to the task.

For difficult off-roading, you might want to consider buying a Jeep Wrangler or Toyota 4Runner, with a proper low-range gear box. For 90 per cent of every other type of backwoods adventure, a Crosstrek will waltz through the rough stuff without difficulty. It scrambled up and down loose and rocky trails, dipped through washouts without scraping its nose and bounced through deep potholes.

Itʼs a terrifically willing little beast in the dirt and more capable than youʼd expect. Add in Subaruʼs easy-to-use X-Mode, which activates terrain selection and hill-descent assist, and the Crosstrek will handle pretty much anything the average owner could possibly throw at it.

Slightly better on tarmac, thanks to some added power, and still at its happiest when getting dirty, the Crosstrek should continue to be a strong seller for Subaru. Itʼs the ideal vehicle for outdoor adventures. Hat and dog sold separately.

This yearʼs Crosstrek gets an updated grille and new bumper cladding, but you probably wonʼt notice the difference. Subaru styling is nothing if not conservative; you buy one for its utility.

As with the larger Outback, the Outdoor version of the Crosstrek gets a heavy-duty synthetic interior that wipes down easily. It feels comfortable enough and looks as if it will take an absolute beating from sweaty outdoor enthusiasts, kids and pets. Also worth noting is that, despite its small footprint, the Crosstrek can easily carry four adults to any hiking expedition, as the rear seat room is generous.

Having touched on the larger gasoline engine, a word about a cleaner-running Crosstrek coming soon. Subaru has confirmed that its plug-in hybrid Crosstrek will be coming to the Canadian market but will be launched separately at a later date. The hybrid Crosstrek, with a higher price tag but less cargo space (to accommodate the battery), will offer roughly 27 kilometres of electric-only range and use less fuel than its conventional counterpart. Itʼll be a good choice for the urban commuter who heads to the hills on the weekend.

Subaruʼs camera-based Eyesight driver assist is standard on any CVT-equipped Crosstrek and provides an extra level of safety. However, some of its convenience features, such as lane-keeping assist, arenʼt quite up to snuff yet. The system dropped out frequently on curving sections of the Sea-to-Sky Highway and was really only useful when the road was straight and clear.

The seats fold nearly flat in the Crosstrek, which makes an emergency overnight stay at the trailhead a possibility. With the rear seats up, space is 588 litres, placing it in the middle of its class. If you tend to pack a lot for longer trips, budget for a roof box. 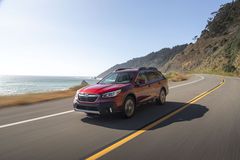 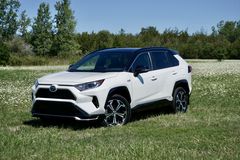 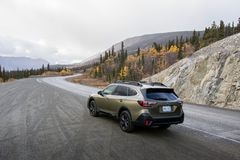