Could the pendulum be about to swing back? Probably not.

With light trucks currently hogging about 80 per cent of the market, the trend is so entrenched that it’s becoming a self-fulfilling prophecy. As passenger-car sales fall, automakers stop making them, and even more buyers are persuaded to choose a pickup, SUV or crossover instead.

That said, at least one of the reasons to buy an SUV or crossover is losing its legitimacy. All-wheel drive (AWD) is at least optional, and more likely standard, on most luxury-segment passenger cars, and now it’s increasingly available on mainstream, garden-variety cars too. Among the recent converts are the mid-size Nissan Altima, Kia K5 and Toyota Camry, and the compact Mazda3. Subarus, of course, have been AWD for decades.

Then there’s our vehicle of interest here, the Toyota Avalon. But there’s a bit of a paradox in the case of the Avalon. Apart from AWD’s obvious merits on traction-challenged surfaces, another benefit of all-wheel drive is to help powerful engines effectively put power to pavement. Case in point, the 301-horsepower 3.5-litre V6 that is standard in the Avalon. Launch hard from rest in a front-wheel drive Avalon, and the usual result – even on a dry surface – will be a stumbling lurch as the traction-control nanny shuts down what would otherwise be a frenzy of “Arrest me!” wheelspin.

The paradox? The AWD Avalon has a 205-horsepower, 2.5-litre four-cylinder engine. With 100 fewer ponies than the V6, there’s less need for AWD in the first place, at least from a performance point of view. That paradox becomes even more pointed when you consider that the sole V6-engined Avalon offered in Canada now wears an XSE badge, has been reoriented as “a sporty, performance-focused cruiser” – but is still front-wheel drive.

As for the notion of a sporty Avalon, that’s not as oxymoronic as it seems. Yes, the Avalon used to be Toyota’s equivalent of a Buick LaCrosse, but the 2019 redesign changed that. Like its Camry sibling, the current Avalon has a heaping helping of sportiness baked into its steering and handling – traits that true gearheads relish – without sacrificing ride comfort.

Toyota figures that anyone who remains loyal to sedans in the face of the light-truck tsunami must really value driving dynamics, so let’s give them more of it. In fact, in the United States, there’s even a TRD (Toyota Racing Developments) version of the Avalon – watch your back, Mercedes AMG.

Despite the smaller engine, the Avalon AWD ($48,750) is priced above the V6 XSE ($43,050) because it only comes in one all-singing, all-dancing Limited trim. Standard kit includes a heated steering wheel, heated and ventilated front seats, semi-aniline leather trim, a 14-speaker JBL audio system, navigation, power tilt-and-telescopic steering adjustment, and a head-up display that projects information such as speed and directions onto the windshield.

One side benefit of choosing the AWD Avalon is fuel efficiency. Its official combined rating of 8.4 litres per 100 km is 12 per cent better than the V6 Avalon’s 9.5 L (or 18 per cent better than, say, a Toyota Highlanderʼs 10.3). We measured a real-world 9.6 L per 100 km – very creditable for mostly urban driving in early-December cold.

Clearly, the Avalon is a niche product in today’s market, and the addition of an AWD version won’t change that. But if you see yourself in a roomy, luxurious, comfortable sedan that provides the security of all-wheel drive without a euro-lux price tag, this Avalon is all that. Plus, it comes with a bonus you will never experience at the wheel of a Ford F-150 or a Toyota RAV4 – exclusivity.

The 2019 do-over brought a sleek, long, low-and-wide look to the previously frumpy Avalon. However, the face full of grille – whether the horizontal-slat design on the AWD or black mesh pattern on the XSE – is polarizing.

Like the exterior, the interior eschews conservative tastes. The dashboard is dominated by a tall, flat panel that houses a nine-inch touch screen, as well as the centre fresh-air vents and an ample array of actual buttons to regulate the HVAC and audio. Typical of Toyotas that share the TNGA architecture, the cowl seems rather high, but there’s ample at-the-wheel adjustability (eight-way plus lumbar power adjustment), and other visibility factors are excellent. The Avalon’s long wheelbase – 46 millimetres more than the Camry’s – goes directly into rear-seat legroom, which is generous, though overall passenger volume is matched or beaten by several mainstream mid-size sedans. Despite its outer dimensions, the Avalon is no longer officially categorized as a large car.

When you’re just tooling around town, the 2.5-litre’s alert response to small throttle inputs and co-operative transmission deliver the perception of reasonably brisk progress, albeit requiring more engine rpm than you might expect. Maximum-effort acceleration, however, can only be described as languid – expect a test-track zero-to-100-km/h time in the nine-to-10-second range. Of course, that’s on dry pavement. Throw some precipitation or gravel into the mix, and AWD traction would help the Avalon launch effectively while stronger-engined front-wheel drivers would be futilely groping for grip. And if the AWD Avalon is no straight-line sprint star, there’s some redemption on curves, which reveal alert steering response, taut body control and nice balance. Ride quality is at the firm end of the spectrum but controlled and nicely cushioned.

Trunk volume of 456 L is a little above average for its class, but there’s a big step up to the folded seatbacks, which limits the usefulness of the pass through.

Car Review
The 2021 Kia K5 is a well-equipped all-wheel-drive sedan at an attractive price
January 5, 2021 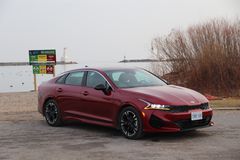 Seven of the hottest hatchbacks on the road
December 16, 2020 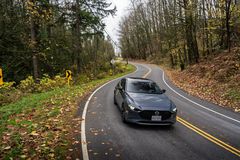 Car Review
If you’re shopping for a minivan, the Toyota Sienna should be top of the list
December 2, 2020 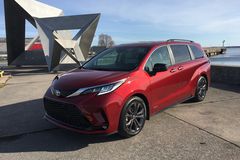