Well, it looks like a truck because it has a cargo bed on the back, but that’s about it. The Santa Cruz is basically a Hyundai Tucson SUV with the back chopped off. It’s been replaced with a short bed that’s big enough to hold a mid-sized motocross bike if you lower the tailgate.

It’s a unibody construction, which means the vehicle is built in one piece around the chassis like a car and not with its body bolted to the frame like most pick-up trucks. The only other unibody truck is currently the larger Honda Ridgeline, but Ford will soon debut the unibody Maverick, one size down from its Ranger.

What’s more, the moulded composite cargo bed will probably spend most of its time covered by the lockable metal tonneau cover, a standard item in Canada. It can support 220 lbs – and yes, I stood on it to make sure, and I weigh 215 lbs – so if need be, you can stand up there to fix cargo to the roof. There’s even a shallow storage area under the bed that includes a drain-plug. Tailgate party!

Does the Santa Cruz drive like a truck? No, it drives like a Hyundai Tucson SUV. Actually, a more powerful Tucson because it uses the 281 hp engine and drivetrain from the mid-sized Santa Fe. This gives the Santa Cruz 311 lbs.-ft. of torque, which allows for a tow rating of 5,000 lbs (2,268 kg), and that is very strong for such a compact vehicle.

(In the U.S., the Santa Cruz is also sold with a non-turbocharged engine and front-wheel drive, which gives a tow rating of 3,500 lbs., but the turbo and all-wheel drive are standard in Canada.)

And does it sound like a truck? Not at all. It’s just as quiet as any SUV, and the fully-loaded tester I drove had a terrific Bose sound system. As it should for more than $40,000.

“We don’t see the Maverick as competition,” says Romano, which is just as well with that large a disparity in price. “Ford is basically a truck brand and we’re a car brand. We’re moving in a different direction and we’re in line with where we see (Toyota) RAV-4 and (Honda) CR-V going.”

Those are the two best-selling compact SUVs in Canada and Hyundai wants to offer more of an alternative than just its compact Tucson. Closed at the back like an SUV, or open like a truck? It’s up to you.

The Santa Cruz is more than just cute – it’s good looking in its own way. It’s designed for North American hipsters and will only be sold in the U.S. and Canada, and it’s built in Alabama. Truck people won’t like it, but it shares many of its SUV design cues with the new-generation Tucson, including the headlights integrated into the front grille. If you look at it from the front, you can be forgiven for not realizing that it even has a truck bed at the back.

There’s comfortable space inside for both rows. Leg room is reduced from the Tucson by a few millimetres in the back but that’s about it. Driving the Santa Cruz, you’ll forget you’re driving a vehicle with an open bed behind, which you can’t even see through the split rear window. The only obvious difference with the cabin of the Tucson is the gear shift lever on the centre console: the SUV uses push buttons for the transmission that adds to the airiness of the area, while the Santa Cruz has a truck-like shifter. It also has shift paddles on the steering wheel so you can drive it like a truck or a car: your choice.

It was a smart move to fit the Santa Cruz with the larger engine from the Santa Fe, so it can handle truck-like hauling tasks. Hyundai says its maximum payload in the bed is 1,785 lbs (810 kg), which is quite respectable for its size. It’s also greater than the Maverick, which has a payload of 1,500 lbs in a bed that’s five cm longer. While we’re comparing the two, the Santa Cruz has a tow capacity of 5,000 lbs over the Maverick’s 4,000 lbs with the Ecoboost engine, or 2,000 lbs with the hybrid.

These days, however, performance is also judged by fuel consumption and the Santa Cruz is relatively thirsty with a combined average consumption of 10.6 L/100 km. The Tucson AWD has an average of 9.0 while the Santa Fe, with the same engine, is 10.0.

Hyundai says there are no plans for a hybrid version of the Santa Cruz, presumably because it doesn’t expect to sell that many and it wanted to emphasize its truck-like strength. This could be a mistake, though, because the Maverick will be sold as standard with a 2.5-litre hybrid engine (a 2.0-litre Ecoboost is a more costly option), and that hybrid has an official combined average of 5.9 L/100 km.

The most basic Santa Cruz is pretty loaded in Canada, with heated front seats and a heated steering wheel, blind-spot collision avoidance and an 8-inch colour touch screen. Spend the extra for the $41,399 “Preferred Trend” and you’ll get the better Bose sound system, leather seats, a larger 10.25-inch touch screen, adaptive cruise control and Hyundai’s “junction turning detection” that helps anticipate vehicles turning in front of you at junctions. The top-of-the-line “Ultimate” adds bigger wheels and Hyundai’s blind-spot video cameras in the digital gauges, as well as LED headlights and ventilated front seats.

It’s the smallest truck bed in the business, at 1,323 mm (52 inches) long when the tailgate is closed and 1,900 mm (75 inches) when the tailgate is open. It’s clever though, with the locking tonneau cover and the under-floor hidden storage. There are latches and LED lights for easier use of the bed, and even small ledges on which you can lay planks to create a second, raised floor. Inside the cabin, the rear seats flip up to reveal more hidden storage, just like the real trucks.

Okay, I’ll accept it – the Santa Cruz is not a real pickup truck because it looks and drives and sounds like an SUV. The truck bed in the back may be more practical for some people, especially with carrying sports equipment or tall supplies. But whatever Hyundai says, prospective buyers will cross-shop it with the Ford Maverick, and that truck is $10,000 less at every trim level, and almost twice as fuel efficient. Clearly, there’s a price to be paid for driving a lifestyle vehicle. 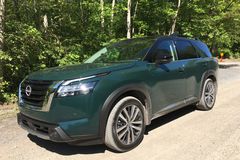 Car Review
The 2021 Toyota RAV4 Prime is a roomy, family-friendly crossover that is good at nearly everything
July 26, 2021 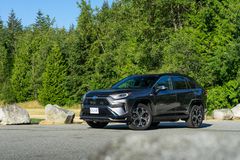