So it has come to this. Such is the perceived shame of owning a minivan that you have to be tricked into buying one. First, automakers stop calling them minivans and tell you it’s some new vehicle category they just made up. Then they give them new nameplates. And then they make them look more like SUVs.

The 2022 Kia Carnival is actually the next generation of Kia’s long-established Sedona minivan, except now Kia is calling it an LUV – Life Utility Vehicle. The Carnival name is also new to Canada, though it’s actually what the “Sedona” was always named in most other markets. And the new shape, with its blunt snout and dummy skid plates, does indeed look SUV-ish.

Whatever you call it, at least Kia still is a player in the dwindling don’t-call-it-a-minivan category. Its only sliding-doors competitors are the Chrysler Grand Caravan/Pacifica, Honda Odyssey and Toyota Sienna. The Chrysler and Honda are freshened for 2021 (with a new all-wheel-drive option on the former), and the Toyota is all-new with a hybrid powertrain and electric AWD option.

Offering neither AWD or hybrid options, the Carnival’s primary unique selling proposition is available “La-Z-Boy” seating in the second row. The power-adjustable VIP Lounge seats are exclusive to the top-grade SX and, Kia claims with some justification, are “the automotive equivalent to business-class travel.”

Five trims are offered in Canada, ranging from LX at $34,495 to SX at $48,295. Naturally, most of the best gadgetry is reserved for the spendiest trims. The four lower trims are all eight-seaters, with the second row comprising three independently adjustable sections.

Other bragging points include an available panoramic dashboard with Mercedes-like dual 12.3-inch screens, an audio quiet mode, front-to-rear intercom and a passenger-view camera for monitoring the brood’s activities in the back. Even the base LX has heated windshield and washer nozzles, LED headlights, rear air conditioning and rear parking sensors. The LX+ adds a power driver’s seat, heated seats and steering wheel, wireless phone charging, and power tailgate and sliding doors, with three more trims each adding more convenience, luxury and bling.

Mechanically, the Carnival is pretty standard fare for the category, with a 3.5-litre V6 (up from 3.3 L on the Sedona) powering the front wheels via an eight-speed automatic transmission. Its new N3 architecture also underpins the midsize K5 sedan and Sorento crossover.

Despite the new “LUV” marketing schtick, the Carnival isn’t a new kind of family vehicle. And beneath the quasi-SUV styling, it isn’t even a whole new kind of minivan. There are no hybrid or AWD options or hide-in-the-floor second-row seating.

It is, however, a fine execution of a standard-issue minivan that’s priced right, drives well, and has all the space and versatility that minivan owners expect. The true shame would be if SUV-addled shoppers continued to cold-shoulder this category of supremely sensible vehicles – a category with one more compelling option.

It looks like a full-size SUV with slammed (lowered) suspension, and judging by the reactions of other road users, the look works. Despite the low-rider stance, claimed ground clearance is quite generous at 6.8 inches.

By the numbers, the Carnival has marginally the most first- and second-row passenger space among its peers, and while the Japanese competition has more third-row knee room, there’s still ample space for adults. The VIP Lounge second-row seats provide sumptuous comfort, even without using their power recliner function, and can be slid sideways as well as fore-aft, but they are not removable, and you can’t tailor maximum sprawl unless the third row is stowed.

Other trims have three second-row seats that are individually removable and adjustable; the middle one has extra-long sliding capability both forward (making it easier for front-seaters to attend to a child-seat occupant) and rearward (to create more space); it can also be folded to make a table. But unlike in the Honda Odyssey with its middle seat removed, the outboard seats don’t adjust sideways.

The driver gets a widely adjustable throne that lets you sit taller than in most rivals, with a clear view over the wide-and-low instrument panel that houses, on the top trims, side-by-side 12.3-inch screens – a digital gauge cluster on the left, an infotainment touch screen on the right – under a single pane. Lesser trims have conventional analogue dials and a smaller 8-inch touch-screen. Secondary controls are all simple to use, not overly reliant on the touch screen, though most audio and HVAC switches are touch-control icons, not physical switches.

Engine outputs of 290 horsepower and 262 lb.-ft. of torque align with the competition, and despite low-mileage tightness, the test van’s robust-sounding engine delivered a solid 8.1-second dash to 100 km/h. Other aspects of its road moves – refinement, braking, handling, ride – are likewise as good as it gets in modern minivans, albeit skewing somewhat to the sportier end of the comfort-versus-control continuum. A government combined consumption rating of 10.6 L/100 km is improved over the Sedona and closely matches the non-hybrid rivals. 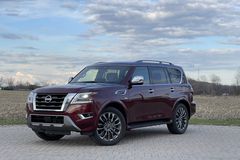 Car Review
The 2021 Chrysler Pacifica is here to challenge your anti-minivan bias
April 19, 2021 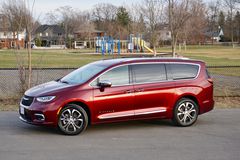 Car Review
The 2022 Mitsubishi Outlander is a roomy upgrade from days of yore
April 6, 2021