There are countless clever innovations and upgrades in the so-called all-new (though it’s not really) 2021 Ford F-150, and Ford managed to bundle most of them into the test sample that came to stay for 24 hours.

Mechanically, the 2021 model’s biggest change is a new full-hybrid powertrain option. But there’s more to this electrified PowerBoost package than partial electric propulsion. It also includes the Pro Power Onboard – a 2.4-kilowatt power generator, integrated into the cargo box, for use at job sites and campgrounds.

A 7.2-kilowatt version of the generator is also available on the hybrid, while a 2.0-kilowatt version can be optioned on F-150s powered by the carryover 2.7-litre EcoBoost V6 and 5.0-litre V8 engines (but not with the base 3.3-litre V6 or 3.0-litre turbo-diesel V6 that complete the powertrain menu).

We raised an eyebrow at the “all-new” claim because the chassis is basically carried over, as are most of the engines and transmissions. The underlying all-aluminum body structure remains as is, too. But Ford says the exterior sheet metal is all new; likewise the bumpers, grilles, lamps and so on. That said, you likely won’t know you’re eyeballing a 2021 model unless you’re already intimately familiar with your own older F-150.

No such uncertainty on the inside. A completely refurnished cockpit features an integrated, horizontal 12-inch display screen that’s standard on all but the lowliest trims. A digital “virtual” gauge cluster of the same size is also present on the Lariat model and up. An optional interior work surface folds out from the lid of the centre-console storage box and – what a party trick – the shift lever folds down into the console at the push of a button to enable the tray to lay flat.

The hybrid – a $3,500 option on the SuperCrew model in all trims – combines a 35-kilowatt (47-horsepower) electric motor with the 3.5-litre EcoBoost V6 to benefit both performance and fuel economy. Maximum power comes in at a combined 430 horsepower, compared with 400 horsepower for the gas V6 on its own, and peak torque rises to 570 lb.-ft. from 500. A 1.5-kWh battery pack is positioned under the box floor and can propel the truck on electric power alone for short distances at low speed.

The hybrid package adds a not-insignificant 255 kilograms of mass to the truck, however, which must offset some of the benefits of electrification.

Over our 24 hours, we quite often saw the PowerBoost slip seamlessly into electric-vehicle mode at steady urban speeds (up to 70 kilometres an hour), which suggests meaningful fuel savings if you often drive like that. At the end of our test, the trip computer showed that fully 29 per cent of our driving had been in EV mode (though that includes the times when the truck was decelerating).

Then again, we have achieved a real-life 11 litres per 100 kilometres or better in the F-150 diesel and in its GM and Ram counterparts. However, the diesel is a much more expensive option than the hybrid. And no diesel – or precious few other pickups, regardless of their powertrain – can accelerate with the effortless authority of the F-150 hybrid, or sound as good while doing it.

At the end of the day, the hybrid – sorry, PowerBoost – is one more compelling option on a thoughtfully improved, highly capable and feature-rich pickup that clearly isn’t in danger of releasing its stranglehold on the market any time soon.

It’s an F-150. The basic motif hasn’t changed much since 2004. There are 11 different grille designs on the 2021, so perhaps the best recognition point is the less-pronounced “C-clamp” sculpting of the front lighting clusters.

Interiors vary as much as the grilles, but one constant is the exceptionally roomy rear cabin on the SuperCrew, now with available divisible and lockable storage hidden below the fold-up seat. Up front, there’s a great range of adjustability for the driver (10-way power on our Limited trim), though our not-usually-sensitive spine found the back rests rather hard and flat.

Base seating is a 40/20/40-split bench with steering-column shifter, switching to front bucket seats and a centre-console shifter from the Lariat up. The Limited’s decor includes real wood and highly tactile knurled-aluminum accents, though the leather looks a little low-rent. Despite the huge screen, thereare still plenty of hard buttons for audio and climate control. Oddly, on the digital gauge cluster, even the tachometer is digital – for example, 1.3 equals 1,300 rpm.

The EcoBoost V6 is arguably the most pleasing engine in any full-size pickup. It oozes torque, and to our ears it sounds more melodiously V8-like than actual V8s from its rivals. We recorded zero to 100 km/h in an emphatic 6.5 seconds – and that was starting with the gas engine in auto-shutdown mode. In terms of chassis dynamics, the F-150 occupies a middle ground between the Ram’s emphasis on ride comfort and the GM trucks’ crisp steering and borderline sporty handling. A drawback is the heavy, unprogressive brake-pedal feel.

What doesn’t it have? On the driver-assist list, lane-keeping and automatic emergency braking are standard across the board, and only the XL doesn’t have blind-spot monitoring and rear cross-traffic alert. The available Co-Pilot360 Assist package adds, among other things, adaptive cruise control, lane-centring and evasive-steering assist, while an upcoming Co-Pilot360 Active package will enable hands-free driving on more than 160,000 kilometres of divided highways in Canada and the United States. Active Park Assist is also on the menu. Standard connectivity and infotainment tech includes SYNC4 and 4G LTE Wi-Fi, and the F-150 is first among its peers to offer over-the-air updates.

Unlike the last do-over of the GM pickups, Ford didn’t raise the box sides, so cargo volumes remain as before – competitive with Ram and the imports but well shy of Chevrolet and GMC. What is new are the extra cleats on the sides of the tailgate to tie down extra-long cargo. Depending on the truck configuration and appropriate options, maximum payload ranges up to 3,300 pounds, and the top tow rating is now 14,000 pounds. Available reverse guidance and backup-assist options can ease trailer-towing. 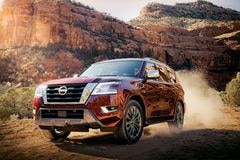 Car Review
The 2021 Cadillac Escalade is a luxury behemoth – and the most impressive Caddy in years
December 4, 2020 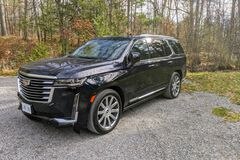 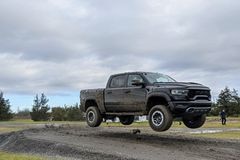