German car-trim badges parted company with logic many years ago – What? The GLS 580 has a 4.0-litre engine? – but at least the model lines still make some sense. Among Mercedes SUVs, for example, the GLA is the subcompact, the GLC the compact, the GLE the mid-size and the GLS the full-size. There may be some alphabetical gaps, but at least they all follow a logical progression in size and price.

Now along comes the new GLB, and even that hierarchy becomes muddled. The GLB is a bit of a segment-bender that shares its front-wheel-drive-based architecture with the little GLA but is actually much closer in size to the compact GLC.

What really sets the GLB apart from its siblings, though, is that you can get it with seven seats. The only other seven-seat Mercedes SUV is the full-size flagship GLS.

Combine that with its sensible-shoes styling, and the GLB’s mission becomes clear. This is the Mercedes SUV for left-brain thinkers. Sure, let right-brainers buy a GLA or GLC or GLE so they can ego-trip on driving an SUV that’s also a Mercedes. But if you just want a (relatively) affordable SUV to perform SUV tasks such as moving people and their stuff, that’s the GLB’s thing.

“Functional compact SUV for family and friends with up to seven seats” is how Mercedes summarizes the GLB, while the GLA is described as a “stylish SUV and sporty brother of the functional GLB.”

The GLA and GLB share the same basic building blocks, with a transversely mounted 2.0-litre turbo four-cylinder engine yielding 221 horsepower, hitched to an eight-speed dual-clutch transmission and a front-biased all-wheel-drive system. A go-faster AMG version, the GLB 35, generates 302 hp from a higher-boost version of the same basic engine.

The GLB may be more about function than fun, but that doesn’t make it a total drudge. In fact, its chassis tuning nails a sweet spot between steering and handling deft enough to engage (albeit not enthrall) expressive drivers, and ride motions are supple enough to satisfy all those passengers.

Speaking of whom, the GLB does deliver. In the five-seater, rear-seat legroom is in a different class from other subcompact crossovers – indeed, it’s above-average even for compacts. The same applies to cargo room, whether the rear seat is up (27 cubic feet) or down (62 cubic feet). If you opt for the third-row seat, all those dimensions shrink a little but are still more than competitive.

And hey, you now have two extra seats, a true rarity among compact crossovers. The third-row package includes a fore-aft sliding second row, which facilitates access to row three. Maximum second-row legroom is reduced compared with the five-seater but is still generous by peer standards. There’s room to spare for second-row adult passengers to move their seat forward to free up space if needed in row three. Any adult back there would likely be positioned with knees pointing north, but it’s tolerable for shorter trips.

Versatile, roomy, comfortable and nice to drive, the GLB seems reasonably priced for an SUV with a Mercedes badge on the grille. But you will have to do without – or else pay a lot extra for – most of the modern infotainment and assisted-drive features that are standard on many mainstream vehicles that cost less.

Befitting its utilitarian slant, the shape is rather upright and boxy. You can dress it up with optional 19-inch wheels (18s are standard) and/or the Sport or Night packages. Exterior elements of the latter, as on the test car, include AMG body styling and wheels, a chrome diamond-block grille and black accents.

The driver’s “office” seating is arranged more low-slung-sporty than command-of-the-road lofty; I couldn’t quite tailor it to the height I like without losing some thigh support. Other visibility factors are fine. However you like to sit, you’re faced by a downsized version of Mercedesʼs signature widescreen display, which combines dual screens – gauge cluster on the left and touch-screen multimedia display on the right – in a single panel. The screens are 7.25 inches standard, 10.25 inches with the Premium package; you can make up your own mind about the unusual aesthetic of the long-and-low rectangular screen sharing the dashboard with brightly bezelled circular air vents. Other ergonomic oddities include a column-stalk gear-selector switch and teeny-tiny touchpads on the steering-wheel spokes for navigating the screen menus (in addition to the main touchpad on the centre console).

The GLB claims a zero-to-100-km/h time of 6.9 seconds, which is just a tick or few behind like-sized and like-priced rivals such as the BMW X1 and Audi Q5. Subjectively, the engine itself spins with the silky refinement worthy of a Benz, and 120-km/h cruising is a relaxed 1,800-rpm stroll in eighth gear (though some wind and tire roar intrudes). But occasionally we experienced some stumble and shunt in stop-and-go traffic, suggesting less-than-perfect co-operation between the auto stop-start feature (which can be disabled), the automated clutch and the engine’s turbo-lag characteristics. There’s also a wide gulf between the driver-selectable drive “moods”; in Comfort mode, the transmission is loath to kick down from higher gears at all, and in Sport, it’s equally tardy about shifting up.

It’s a Mercedes, so if the tech has been invented, you can probably get it – for a price. Even Apple CarPlay and Android Auto require the $3,300 Premium package. For most assisted-drive features, youʼll need to buy the $1,900 Intelligent Drive package, which also requires the Premium package, the $1,000 Navigation package, the $1,600 Technology package and the $900 Active Parking Assist. Head-up display is a $1,500 option – but only if you also get the Navigation and Premium packages.

On the seven-seater, row three is split 50/50 row two 40/60, and all the seat backs fold commendably flat and flush for easy through-loading. Among its peers, only the (five-seat) BMW X1 claims more cargo space than the seven-perch Mercedes. For the record, the GLB doesn’t have a tow rating in Canada, though other markets cite up to 2,000 kilograms for a braked trailer (750 kilograms unbraked). 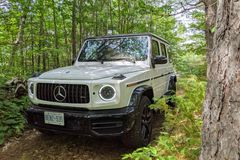 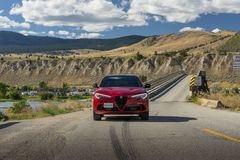